The majority of medical meeting planners surveyed (53 percent) said their digital meeting will include both live streaming and on-demand recordings.

As part of PCMA’s regular Community Chats, a Zoom-based call exploring different topics during the pandemic, a few medical meeting planners expressed interest in learning from their colleagues how they were handling their live events — either scheduled for later this year or canceled — from processing refunds to the possibility of going virtual. Here are the results of a survey PCMA conducted in late April among 54 medical meeting planners.

Ninety-four percent of respondents said that the majority of their attendees come from North America; 30 percent had attendees from EMEA; and 24 percent from the APAC region.

Q: What is the typical attendance for your live annual meetings? Sixty-one percent is planning a digital event to replace all or part of the content from the live event and for 37 percent, that path has not yet been determined.

Q: Are you planning a digital/virtual meeting to replace all or part of the content from the live event? The majority — 67 percent – had never hosted a virtual event in the past, so this is clearly a new and unknown initiative. Only 13 percent said they have had hosted virtual events before, and 20 percent said that part of their live event had an online audience.

Q: Did you have digital/virtual meetings prior to COVID-19? 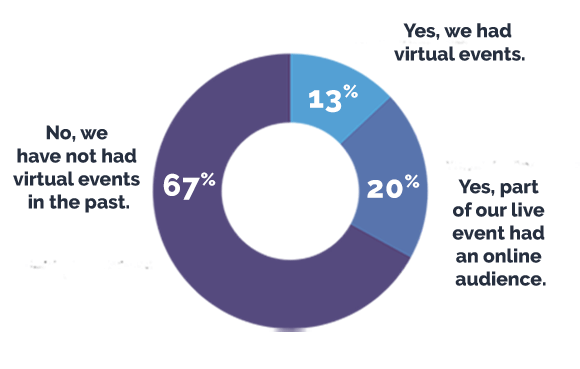 For those planning a digital event, more than half (56 percent) will make their concurrent sessions available online, and 52 percent will make general sessions digital. Other planned digital components include a poster hall (44 percent), exhibit hall (35 percent), and networking function (35 percent). More than half — 54 percent — are still deciding how to digitize their live event.

Q: Which components of your meeting will have a digital/virtual component? Select all the apply. The question of pricing is up in the air for 68 percent of participants. Responses are evenly split (9 percent for each) between making the virtual event free to attend and charging between $500 to $1,000. Eight percent said registration will cost up to $200, and 6 percent said between $200 to $500. No respondents said they would be charging more than $1,000.

The majority of participants (52 percent) expected their program to last two to four days; 8 percent up to one day; and 6 percent more than five days. More than one-third (35 percent) chose “other” and of those, most were still working on deciding the digital event’s duration. One medical planner wrote: “There will be a series of live webinars over a two-month period. The rest of the educational content will be recorded and available on demand.”

Open-ended responses fell into a variety of buckets. Questions around choosing and working with the right platform and provider was mentioned most often, followed by deciding the content, the scheduling, and the program. A number mentioned that planning a digital event is entirely new for them and therefore overwhelming. Several noted concerns around getting buy-in from speakers and working with them to engage an online audience, and the overall challenge of engaging the audience was also cited as a challenge. Others found planning for the unknown particularly challenging, as well as planning both a physical and virtual event simultaneously. Other concerns included costs vs. revenues, having the resources necessary to produce a digital event, and figuring out the correct pricing structure. Here are some of their comments:

“Finding the right dates and times, which will not necessarily be the exact dates our live annual meeting was to take place. Determining which parts to make available virtual. Dealing with the cancellation of the live event while simultaneously planning for a virtual event.”

“The unknown of not producing a full virtual event before. We are conducting a lot of research and discovery and have already learned a lot through this process. For us the biggest challenge is finding the right independent consultant with the knowledge we need to produce a tremendous virtual event for our attendees, members, and our industry and exhibitors/supporters.”

“Picking the platform as well as working with the faculty to ensure they can record their sessions. Many of our doctors are on the front lines right now. We are balancing the need for CME with being sensitive to what is happening for our members.”

“Planning without any historical data is challenging. It’s hard to predict attendance numbers, exhibitor/sponsor support, etc. Plus, this is new to us and we’re planning it on an accelerated timeframe. We also aren’t sure what our attendee availability will be given, as the health-care system is also facing much uncertainty.”

“1. Choosing a company (since they’re all so busy right now, it’s difficult to maintain contact, and there are so many to choose from). 2. Determining how the virtual event will work in terms of programming, schedule, etc. Our annual meeting is 3 1/2 eight-hour days with up to eight tracks at one time; we obviously have to trim that down for the virtual version, so how to decide what content to keep.”

“Everything is new. It’s like going back to school!”