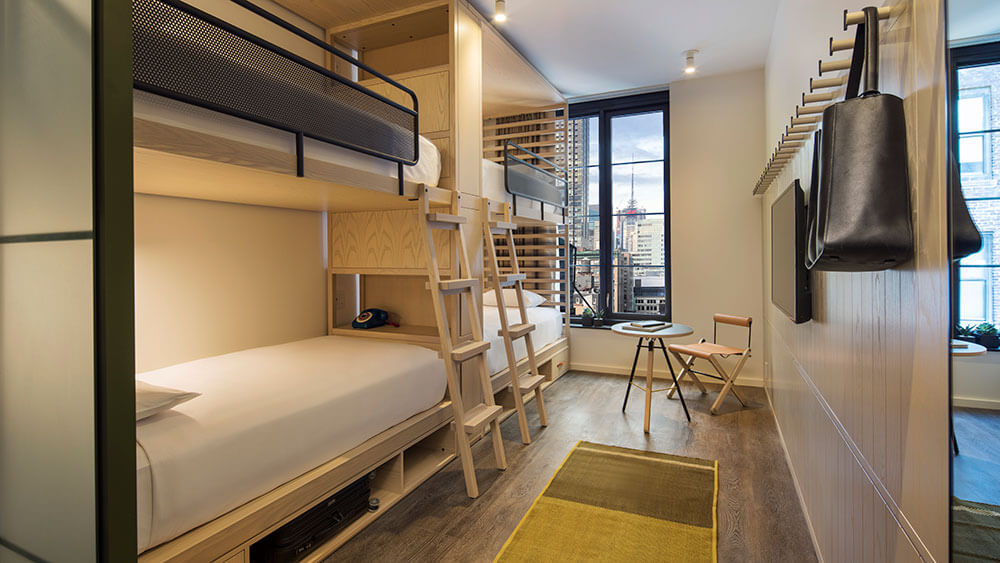 Marriott’s Moxy in Manhattan’s Chelsea neighborhood is one of many hotels now outfitting rooms with bunk beds.

Hotels Building Up — Not Out

Forget one king, two queens, and suites. As hotels work to meet the expectations of an emerging generation of guests, some are taking inspiration from summer camp.

“Hotel accommodations are coming of age with an unlikely feature: bunk beds,” Architectural Digest’s Keith Flanagan wrote in 2018, spotlighting how “trendsetting hotels” like The Robey in Chicago and The Drifter in New Orleans were giving guests an extra decision at check-in — who gets the top bunk? More than a year later, that trend is picking up speed at places like The Maven in Denver, Seattle’s Palihotel, and a range of Marriott’s Millennial-friendly Moxy locations, including New York’s Chelsea neighborhood, Minneapolis, and Nashville.

“With more thoughtful design (and better mattresses) than a hostel, but a lower price point and increased giggly sleep-away vibe than a typical hotel room,” Michaela Bechler wrote in Vogue earlier this year, “the option appeals to an out-and-about traveler that has never wanted or needed a suite.” Event organizers, take note: Those lower price points also can appeal to attendees who are traveling together and looking for a more cost-effective convention experience.

This post is part of Convene’s 2019 Events Industry Forecast looking at the future of technology, travel, lodging, and exhibitions.

Where Are All the Workers?

Hoteliers have been getting plenty of guests to fill their rooms, but they’re struggling to attract employees to fill their open employment positions.

“The most impactful issue for our industry is the fact that we have one million service jobs open without the ability to fill them,” Michael Dominguez told Convene in July on his first day as president and CEO of Associated Luxury Hotels International. “This will be a challenge that could impact service, experience, and specifically cost as this creates wage pressure.”

The Deloitte 2019 Travel and Hospitality Industry Outlook called the current employment shortage “unprecedented.” Immigration reform — a persistent political talking point — could play a major role in solving that shortage. Immigrants make up 31 percent of the hotel workforce in the U.S. The IPO That Everyone Will Be Watching

In August, Airbnb CEO Brian Chesky informed his 305,000-plus Twitter followers that the company he co-founded with two of his roommates was celebrating its 11th anniversary. That date was followed with a belated gift: the company’s second quarter had more than $1 billion in revenue.

It’s been quite the journey for the most-recognizable disruptor in the travel industry whose premise — guests staying in a stranger’s home — was originally dismissed. In fact, in 2014, a Ritz-Carlton leader told Fast Company that she had never even heard of Airbnb.

Fast forward to today, and Airbnb has more than six million listings around the world — more property listings than the six largest hotel groups combined. That growth could enter supercharge mode if the company’s initial public offering — slated for some- time in 2020 — is successful.

As the world waits for Airbnb’s Wall Street check-in, the company has put some of the traditional hotel industry’s most prized audiences — business travelers and events — in its sights.

Airbnb wants business travelers to comprise 30 percent of its bookings by next year — a 15-percent increase from the fall of 2017. And the company recently launched an off-sites and meetings product for teams in need of collaborative spaces.

What will Chesky be tweeting about when the company hits the 12-year mark? Stay tuned.

Sources for graphics: AirDNA statistics of active rental listings on Airbnb and HomeAway as of Sept. 28, 2019 + Cvent’s most recent top list; STR and Tourism Economics