It isn’t every day that you can enjoy museum-worthy works of art from the comfort of your car. With the COVID-19 pandemic shutting down the art world much as it has the face-to-face events industry, an art museum and a convention center in Rotterdam, The Netherlands, decided to partner together to open their doors for a joint drive-in exhibit for art lovers.

The Museum Boijmans Van Beuningen collaborated with Rotterdam Ahoy, a convention center and multi-purpose arena, for a drive-in art experience called the Boijmans Ahoy Drive-Thru Museum, which was open for ticketholders from Aug. 1-23, 11.5 hours a day, seven days a week. The three-week event was a big success, and tickets sold out with 22,000 visitors, Cathy Jacob, director of exhibitions at Museum Boijmans Van Beuningen, told Convene via email.

The Ahoy’s exhibit Hall 1 was transformed into a driveable exhibit with 40 artworks — some projected on giant screens and some arranged on a track in the space that was about the size of roughly one-and-a-half American football fields.

Participants were required to use electric cars — either their own or a car provided by the exhibit — to make their way through the 33,000-square-foot space on a track that kept the cars moving at a walking pace.

Jolanda Jansen, general director of Rotterdam Ahoy, credited “the creativity and determination of both organizations and our many supportive partners” in pulling off the exhibit in a short timeframe. “We are living in a distressing time but also one that demands inventive solutions,” she said in a release before the exhibit began. “It is wonderful to see how this unique idea and partnership has come about.”

According to Jacob, the two facilities were working on a partnership even before the pandemic, and is an idea that she thinks can be replicated by others. With strong partnerships, as well as “a very motivated team, people with creative ideas, organizing talent, and a lot of energy,” other museums and convention centers could partner to achieve similar results, she told Convene. “We would love to do more editions and are looking for other opportunities, even abroad,” she said.

The Rotterdam exhibit isn’t the only creative experience paying homage to the era of drive-in theaters. In May, the Immersive Van Gogh Exhibit in Toronto became one of the first to offer an automobile-based art experience. Those seeking to enjoy some activities outside the four walls of their home also can experience drive-in concerts, dining, zoo visits, and even CVB promotional events.

The exhibit featured more than 40 works from the collection of the Museum Boijmans Van Beuningen that explore “the boundary between humanity and the forces of nature,” according to the museum’s website. “Nature has presented us with a wake-up call without equal, caused by a microscopic virus for which there is no vaccine that has spread fear across the globe. But it also gives us pause for thought, to reconsider the way we live and to search for the reset button.” The electric cars' headlights and the light from projection screens were all that illuminated the artwork. Olaf Nicolai's "Green Bags" are projected on the screens in the background. (Ernst Moritz) Part of Bas Princen's installaton "Model for a Tower (Rotterdam)" is projected on a screen above Claes Oldenburg's "Screwarch." Passengers in an electric car see Marijke van Warmerdam's "Bear" on a large screen in the exhibit. (Amie Galbraith photo) 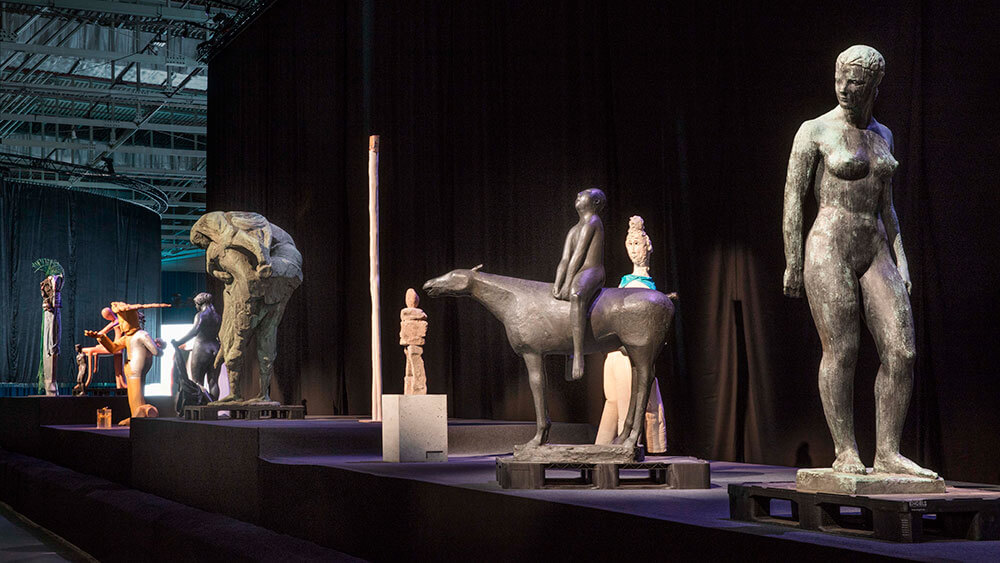 This vehicle did not carry museum visitors. Called "Mercedes met 57mm kanon," it is part of the exhibit, an installation by artist Atelier Van Lieshout. (Ernst Moritz photo)