The exhibition “Fleeting — Scents in Colour,” at the Royal Picture Gallery Mauritshuis in The Hague, shows how 17th-century artists embedded images linked with fragrance in their art. This image shows a scent dispenser in front of a painting by Jan van der Heyden (center back). (Courtesy Mauritshuis)

It’s been nearly five years since I stayed at the Century City Hotel in Cape Town, South Africa, where my hosts gave me a glass atomizer filled with the property’s peppery signature scent. I took the bottle home with me, even though the fragrance wasn’t exactly to my taste, and then every few months I would spray a little into the air, solely to marvel at how I was instantly transported back to Cape Town. I could almost hear the glasses clinking in the cozy hotel bar and see blue ocean waves rolling in on Camps Bay Beach.

That’s the power of scent, a sense which we tend to rank as our least important, but in fact, is one of our most powerful. “When you smell an odor, you automatically link an emotion to it,” said Dawn Goldworm, the co-founder of a global scent-branding company, speaking at TEDx East in 2016.

“Scent and emotion remain forever linked together, floating around in our olfactory memory — our smell memory — which is the largest and most acute part of our memory.” Like my hosts in Cape Town, brands have long used fragrance to forge memorable connections between products and places and customers.

Scent also can play a role in enhancing participants’ experience at digital events, a fact that organizers who send them boxes filled with aromatic candles and freshly ground coffee seem to intuitively grasp. I learned just how well it could work in February, when as part of a press trip hosted by the Netherlands Board of Tourism & Conventions, I attended a “digital scent tour” of an exhibition at the Royal Picture Gallery Mauritshuis in The Hague.

The Mauritshuis, a former palace in the city center filled with silk-covered walls and chandeliers, holds 200 works painted by Dutch and Flemish masters in the 17th century, including the “The Girl With the Pearl Earring,” by Johannes Vermeer. The exhibition, “Fleeting — Scents in Colour,” is a novel examination of how 17th-century artists embedded images linked with fragrance in paintings, drawings, and objects. The world not only looked different five centuries ago, it smelled differently, and curators worked with International Flavors & Fragrances, a company founded in 1833 to create facsimiles of smells lost to history, to match scents to works of art in the exhibition. Planning for the exhibit began more than two years ago, and the exhibition design included foot-operated fragrance dispensers that release tiny bursts of scent into the gallery. 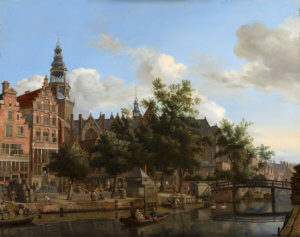 The virtual “Scents in Colour” tour included an “earthy” scent to accompany viewing of Jan van der Heyden’s 1670 work “View of the Oudezijds Voorburgwal with the Oude Kerk in Amsterdam.” (Courtesy Mauritshuis)

When the pandemic restricted travel and access to the museum, the staff created a distance-learning option. I received a box in the mail before the event containing two small vials infused with scent, and on Feb. 23, curator Ariane van Suchtelen led Convene and members of the press from Europe and North America through the exhibition, explaining how our sense of smell can enhance our appreciation of the museum’s works and letting us know when to take out the vials and give them a sniff.

The first vial made me nervous. It was created to accompany a work by Jan van der Heyden, an engineer and artist known for painting Amsterdam’s canals — the waterways are now iconic city treasures, but in the 17th century served as a drain for public toilets. To my relief, that scent turned out to be more earthy and peaty than putrid. The second vial, a sweet-smelling concoction that was carried around in a silver pomander to ward off pungent odors, was reassuringly familiar. It was made from a recipe in medical handbook from that period with ingredients that included musk, cloves, lavender, and cypress.

After the tour, I checked in on the “Brain Rules” blog by molecular biologist John Medina, director of the Brain Center for Applied Research at Seattle Pacific University, to see what Medina has to say about smell. Rule No. 9, “Stimulate more of the senses,” mentioned a study that showed that students learn 10 to 50 percent more when the smell of popcorn is wafting through the air. Our senses evolved to work together, Medina wrote, “which means that we learn best if we stimulate several senses at once.”

Our tour had done that, I realized. I’ve watched at least a half-dozen presentations since the art tour, but I can still vividly hear the click of van Suchtelen’s heels as she walked across a wood floor in the museum, and clearly remember the smoky horizon in the van der Heyden painting that she described. Scent binds our memories even — or maybe especially — at a distance.