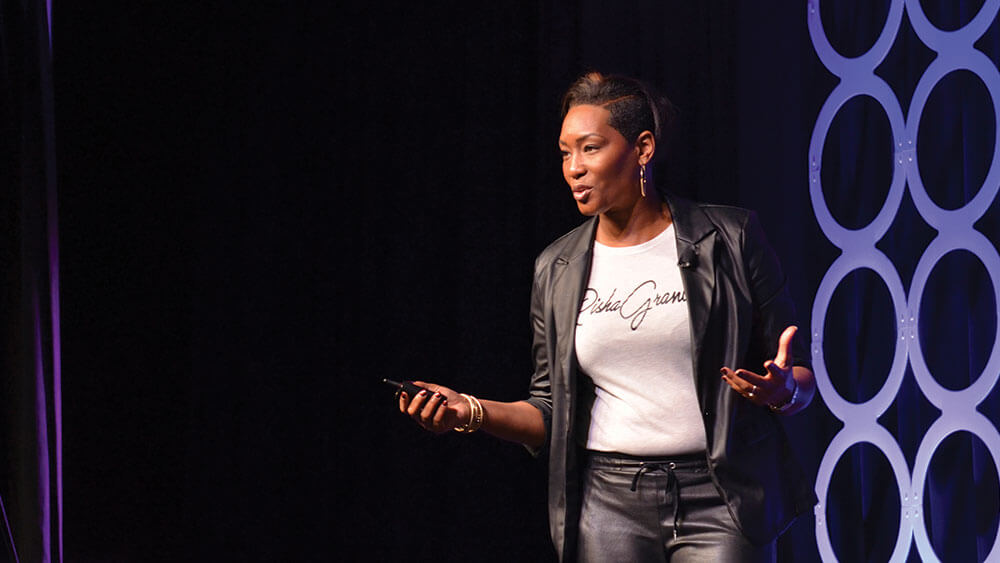 Risha Grant believes the speaker selection process is missing equity. Planners should say, ‘“I want a diverse list of candidates to look at,”’ she said. ‘If you’re looking for speakers of color, it’s like anything else. You just need to do your research.’

When Convene asked readers in a July survey if they set diversity goals when hiring speakers for events, including virtual ones, only slightly more than half — 56 percent — answered yes. That’s an improvement over when we last asked readers the same question five years ago, however, when only 46 percent said yes.

But the biggest change in the survey responses is in the number of people who said that diversity was not a consideration when choosing speakers. In the 2015 survey, 53 percent of readers said they did not consider diversity when choosing presenters, while only 30 percent of respondents to our July survey said they did not — 14 percent said they consider it some of the time. Even though the number of those people who consider diversity all or part of the time has increased over a five-year span, that still means that questions of diversity may not play a part in speaker selection from 30 to 44 percent of the time.

That doesn’t come as a surprise to Risha Grant, who describes herself as “diversity personified” — she is a bisexual Black woman, entrepreneur, and Catholic middle-school basketball coach who runs a diversity consulting and communications firm in Tulsa, Oklahoma. Grant, the founder and CEO of Risha Grant LLC, is also a speaker and author of That’s BS! How Bias Synapse Disrupts Inclusive Cultures. “That’s been the state of affairs, not just for speakers, but for Black folks and people of color for as long as I can remember,” said Grant, who grew up in a small town south of Tulsa. “At the conferences that I go to, there are not a lot of speakers of color. I’m usually the only one,” she said. “It’s disheartening, because I know that there are a lot of great Black speakers out there who just don’t get the opportunity.”

That means that “there’s a whole lot of people that these conferences are missing out on, simply because they’re not being inclusive,” Grant added. The value to conferences from including diverse speakers is clear: “Different people have different experiences that they can bring to the table — you’re going to learn from those people,” she said. By bringing their viewpoints to your audiences, “you’re going to gain the same things that you gain from having them in your boardroom,” she said. “It always [positively] affects the bottom line.” In Convene’s July COVID-19 Recovery Dashboard survey, more than half of planner respondents said they seek to make their speaker lineup more diverse.

“Historically, companies have led diversity and inclusion initiatives by focusing on the economic benefits, but it’s time to focus on the moral case,” Grant said in a PCMA-organized webinar (see “Bias is a Roadblock” sidebar below). “Racism is not an issue for Black people to solve. It’s a human issue.”

Including speakers who are Black has become more of a priority recently, Grant said, in the wake of the global response to the killing of George Floyd, a Black man, by police in Minneapolis in May. Grant has seen a change, not only in the rising number of requests for her services she has received this summer, but in the motivation of those seeking her out. “There are some companies still checking the box, of course, but the sentiment and the people are really more genuine,” Grant said. “I don’t know what it is about this last police murder that has changed everybody’s hearts and minds. I think it is a compilation of things, but the fact that white folks actually have started to stand in solidarity is what changed it. It’s good that it’s happening, but it’s also frustrating that that has to happen for people to understand that this is here, it exists. How many people have to lose their lives for us to see that we have a problem?”

‘You Just Need to Do Your Research’

What would Grant say to those who respond that “content is king” and that they are simply finding the best speakers for the job when asked if they make an effort to make their speaker lineup more diverse? “I know Black speakers can deliver — they just have to have the opportunity to do that,” Grant said. “What’s missing, in my opinion, is equity in the search process. You can actually say, ‘I want a diverse list of candidates to look at.’ If you’re looking for speakers of color, it’s like anything else. You just need to do your research and find them.”

Meeting organizers “should level the playing field and make sure that when they’re looking for speakers, that they are open to finding speakers of color,” she added. “Don’t give them the job simply because they’re a speaker of color, but because you like what it is that they present and they’re good at it. Nobody wants to be hired or fired based on race alone. They want it because they earned it. So just open the door and give people the opportunity to show you what they bring to the table.”

Bias Is a Roadblock

Dancing around a topic is not her forte, Grant warns on her website: “I like to wade right into your BS (and mine) to explain how bias is a roadblock to acceptance and inclusion.”

That includes both conscious and unconscious biases, Grant said in the July 23 PCMA webinar, “Unconscious Bias: Get Rid of the BS.” Here are some highlights of her presentation: “Our unchecked biases are what get turned into isms: racism, sexism, ageism, classism, as well as the phobias like homophobia and xenophobia. Our unconscious and implicit biases create the us-vs.-them mentality, because it’s an unrecognizable part of our upbringing, usually created by those who raised us because we lived through their past hurts, their pains, and their experiences.

“Our diversity is the thing that gives us life. Inclusion is where we suck. We’re supposed to make sure that everyone’s invited, involved, and engaged, but we do a horrible job of that. Think about how the people that you work with [who] attend meeting after meeting [with you], but they never say anything in the meetings. They’re not speaking — not because they don’t have anything to say, they’re not speaking because something about the culture has made them feel as though their voice doesn’t matter.

“For the first time in my lifetime, I think we’re finally going to see sustained change. In order for that to happen, though, we have to get over ourselves and get rid of the BS.”