How do you ensure your event adheres to the Center for Disease Control (CDC) guidelines for gatherings? One new tool on the market helped the National Cattlemen’s Beef Association (NCBA) meet safely in person for its Cattle Industry Summer Business Meeting, held July 27-30 at the Gaylord Rockies Resort and Convention in Aurora, Colorado. NCBA worked with 42Chat to launch HealthShield™, a COVID-symptom screening tool.

“We are one of the few groups attempting to have meetings in person right now, and we had the desire to utilize a product like this one to provide an added layer of safety for our attendees,” said Thad Larson, senior director, meetings & events. The hybrid event drew 600 attendees, 450 in person and 150 online. Attendance for the annual meeting was down less than 10 percent, compared with last year, Larson said.

Here’s how it worked. On the first day of the NCBA event, attendees received a text from 42chat with a link to a three-question symptom survey. (Courtesy 42Chat)

Before the event, attendees received an email explaining the health-screening process, which needed to be completed online or on site before they could enter the meeting room. On the morning of the first day of the event, attendees received a text on their cell phones with a link to a three-question symptom survey (see above image). In about 15 seconds, users signed a waiver attesting to their health, completed the screening questions and received a valid green check mark to enter, or a red or yellow mark restricting their access or referring them to additional steps they needed to take prior to entering. A green check mark in the 42Chat app meant the attendee was cleared to enter the meeting room.

Over the course of the three-day event, 187 users completed 439 health screenings. NCBA didn’t require attendees to be screened via the text tool, but it did save time for those who did, Larson said. Those who completed the contactless screening process and received a valid green check mark moved quickly through doors by showing their phones. For those who didn’t complete the screening online, NCBA had staff on site to complete the screening in person.

“Screenings were time stamped, so NCBA has a digital audit trail that could be provided to local health departments, stakeholders, or even attorneys, if needed,” said Alyssa Mallory, customer success director, 42Chat. Organizers determine how long screenings are valid before attendees need to be screened again. NCBA opted for daily screenings that were valid for eight hours. The tool can also be integrated with thermal scanners.

Event organizers have access to real-time data on the attendee screenings via a dashboard. “The information we are collecting is first name, last name, and mobile numbers, and the questions they are answering are required for entry, so it doesn’t fall under HIPAA (Health Insurance Portability and Accountability Act) rules and requirements,” said Mallory.

While this was the first usage of HealthShield in a conference or meeting setting, 42Chat has been deploying the texting tool with live sports leagues and tournaments since May. The tool also allows for additional ad hoc messaging and engagement to any group of users. For example, at a lacrosse tournament in July, 42Chat used HealthShield to remind spectators via text to maintain the site-specific requirement for physical distancing. 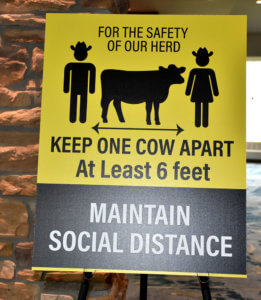 When it comes to costs for organizers, pricing is based on total attendees, the number of days, and the number of screenings, Mallory said.

NCBA was able to implement the HealthShield in a matter of days because the group had partnered with 42Chat earlier in the year to produce a chatbot for its Cattle Industry Convention & NCBA Trade Show, which was held Feb. 5-7 in San Antonio. Known as CattleCon, the annual citywide event drew 8,000.

“We wanted to test drive the tool at smaller event, and we are planning to use the chatbot and HealthShield for our annual convention in February,” Larson said. CattleCon 2021 is scheduled for Feb. 3-5 in Nashville.

“It was a successful implementation, but all of the credit goes to the attendees for allowing the meeting to happen in the first place,” Larson said. “Without the desire to be together and the understanding in the value of face-to-face, it wouldn’t have worked.”

Danica Tormohlen was editor at large at Trade Show Executive magazine and is the former editor in chief of EXPO Magazine, and is based in the Kansas City, Missouri metro area. Follow her on Twitter @DanicaTormohlen.