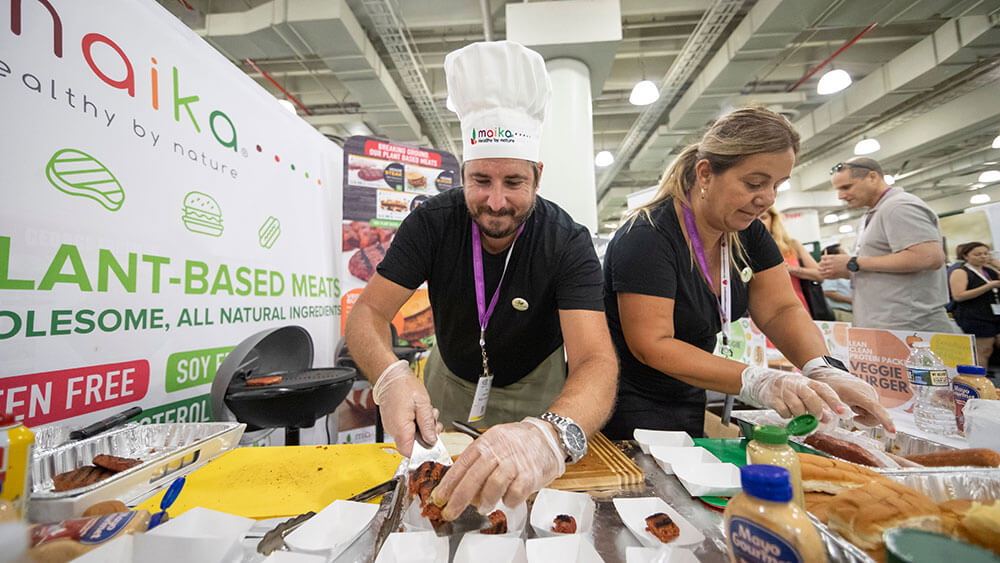 On the surface, the branding of the Impossible Burger seems quite appropriate: How can something that looks exactly like a standard burger be made from plants? Dig deeper into the American dining scene, and what seemed truly impossible about the entire concept initially was that people would ever actually order it. In 2018, U.S. Department of Agriculture data showed that the average consumer ate more than 222 pounds of red meat and poultry — a new record for humans eating animal proteins. Many people didn’t just love meat, they dismissed those who chose to exclude it from their diets. “Why do people hate vegans?” a headline in The Guardian asked in 2019. At the same time, though, the commitment to a plant-based diet was gaining ground. In fact, research from Ipsos Retail Performance tracked the surge in vegans from 2004 — a period of “obscurity” when just 290,000 Americans considered themselves vegan — to 2019 when 9.7 million people embraced a plant-based lifestyle. What’s behind this change? Mark Banahan, campaigns manager for The Vegan Society, told Convene that it’s impossible to pinpoint the recent growth of veganism to any one thing. “So much has happened culturally, politically, and technologically to increase awareness and acceptance,” he said. “It’s really been a snowball effect.”

However, he does think that one thing that has helped the movement gather critical mass is the consumer-focused in-person events that have historically played a key role in fostering a sense of community among vegans — particularly in the early days of veganism when plant-based menu options were scarce at mainstream restaurants. Those events helped strengthen the existing community, but Banahan said that part of The Vegan Society’s mission has been to reach beyond those who understand the benefits of a plant-based diet.

“We’re not always speaking to vegans,” Banahan said. “It’s more outward-looking. We want to convince influential voices who aren’t vegan of the value of the movement.” The Grow Green 2019 conference at the British Library explored the potential and challenges of the shift toward farming more plants.

With that in mind, Banahan said that the organization began hosting ancillary events at all the major political party conferences in the U.K. in 2015. When they first launched those parties, Banahan said that high-level politicians were hesitant to associate with veganism. In 2018, though, that attitude shifted. At the Conservative Party Conference, the serving farming minister in the government agreed to speak on one of the organization’s panels.

“The event was not even particularly well-attended, but the fact that he was there provided photographic proof of the movement,” Banahan said. “Being able to issue a press release with his photo and send that to hundreds of media organizations has an exponentially bigger reach than any number of people you could have fit in the room where he was speaking.”

Banahan and The Vegan Society continued to extend that reach by diving fully into the conference business with the inaugural Grow Green Conference in the spring of 2019. The one-day program was focused on creating public policies that could help transition to a more plant-based agricultural industry. Approximately 200 delegates participated in the event at the British Library, including key decision makers from the United Nations Food and Agricultural Organization and current and former politicians.

“There is a certain sense of gravitas that comes from hosting a conference that looks and feels professional,” Banahan said. “It felt like a strategic move to gain credibility from a wider audience that we need to help continue to fuel the movement.” Good Vibes Need a Good Place to Do Business

When Ben Davis shifted to a vegan diet in 2017, part of what appealed to him included the focus on sustainability and health of what he called “the good-vibe hippie movement.” However, as someone with an understanding of the events industry — Davis’ father, Joel Davis, is the founder and CEO of Connecticut-based JD Events — he noticed that the movement lacked a business-focused live experience.

“There were no major shows focused on a plant-based lifestyle,” Davis said. “There were consumer-focused vegan events, but there weren’t any professional events to deliver networking and education.”

At the time, Davis said that some established trade shows around the restaurant industry and natural products were “paying attention” to the topic, but the education offerings were broad and barely scratched the surface. “The industry was getting to a point where really deep conversations needed to take place,” he said. “For example, if you’re an independent restaurant owner, do you put an Impossible Burger or a quinoa bowl on the menu? How do you price it?”

In addition to facilitating conversations in breakout sessions, Davis said that the industry needed a trade-show component that allowed plant-based manufacturers to shine on their own merits. “Instead of having a plant-based cheese company next to a bacon booth,” he said, “the community needed to have its own identity and home rather than feeling like a smaller piece at a bigger event.” The 2021 Plant Based World Conference & Expo, for industry professionals and consumers, will return to the Javits Center, Dec. 9-10.

To establish that identity, Davis developed the framework for the first-ever Plant Based World Conference & Expo. Held in the summer of 2019 at New York City’s Javits Center, the program welcomed nearly 4,000 attendees and 150 exhibit booths. The crowd served as evidence of success, but — like The Vegan’s Society’s efforts in the U.K. a few years earlier — there was another positive outcome that couldn’t be measured in numbers: media attention.

“I think it played a big role in helping plant-based be seen as a mainstream movement,” said Davis, who serves as vice president of content for the expo, “particularly because of the media that covered the event.”

Attracting that kind of national coverage by major outlets like CNN and Reuters was a key objective for the launch. “We needed to make a statement,” Davis said. “Every decision we made from a marketing and operational standpoint aimed to attract attention. By putting it in a big space in New York City, we made sure that we could ride the wave of the rest of the industry.”

That wave included the initial public offering — and valuation of $1.5 billion — in May 2019 for the Beyond Meat plant-based meat substitute food company, the addition of the Impossible Burger to Burger King’s menu, and The Economist’s proclamation of 2019 as “The Year of the Vegan.” All those signs point to plant-based diets becoming more a part of the mainstream, but Davis acknowledged there is still room for huge growth. Looking ahead, plans for the second expo in New York (2020 was scrapped due to the pandemic) and another edition in London will be focused on advancing the supply chain.

“For the longest time, veganism was part of a counter-culture movement,” Davis said. “That’s no longer the case. Now, we want to continue to empower the decision makers in the business community to see the opportunity in plant- based both socially and economically.”