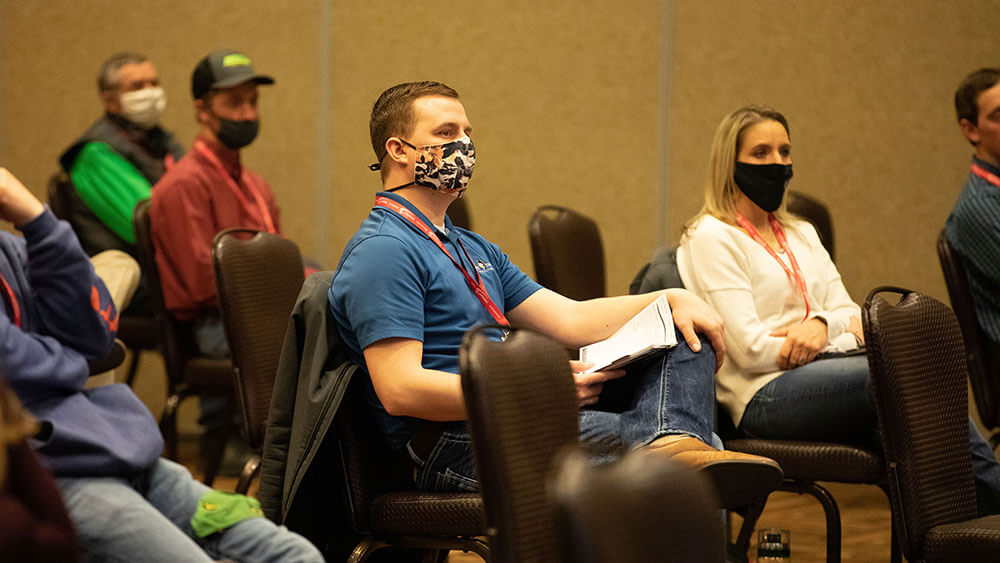 A year after converting their annual business conference to an online event, the Professional Dairy Producers of Wisconsin (PDPW) returned to an in-person event in March, 2021.

When Cassandra Strupp and her team converted the Professional Dairy Producers of Wisconsin (PDPW) 2020 Business Conference to an online-only meeting last March, it was the first time the organization had offered a digital education component at a meeting, Strupp, PDPW’s program manager, told Convene. After tiptoeing around the idea of virtual for many years, she said, “we ripped the Band-Aid off.” In the weeks following the conference, PDPW’s staff continued its full-throttle approach to digital, launching a free, livestreamed, hour-long program, “The Dairy Signal,” three days a week. Over the course of the past year, the organization has transformed itself from one that offered a few webinars a year to one “operating at a completely different altitude” digitally, Strupp said. So, as the conference returned to an in-person event in March, the challenge became, she said, to offer a digital option for participants alongside the face-to face event.

Strupp spoke with Convene about PDPW’s conference and how it fits into its overall education program.

Held March 17-18 at Kalahari Resorts and Conventions, in Wisconsin Dells, Wisconsin, the PDPW Business Conference drew approximately 900 in-person participants. “That’s about half of what we normally have, but all things considered,” Strupp said, the turnout “was phenomenal. The people that were there were able to interact with folks that they haven’t seen in over a year — and we also had new faces. People were very appreciative and excited to be amongst their peers.”

Those connections are particularly valuable in the dairy industry, where people tend to work in their own silos, Strupp said. “We all rely on each other, but we don’t necessarily get to have that face-to face interaction.” The business conference — which brings together a cross-section of dairy farmers, veterinarians, industry representatives, and academics — gives participants the opportunity to interact with scientists and researchers and to ask questions and challenge the status quo, she said. “Virtual events don’t always have that element,” Strupp said. In-person interaction “just gets the wheels turning in a different way.”

Given the enthusiasm of the audience for the online event — the 2020 digital conference doubled the conference’s attendance compared with previous years and increased its geographic reach — PDPW’s board also wanted to provide an online option for participants restricted by family or work obligations or by travel or other constraints, Strupp said.

PDPW’S 2020 EVENT: How a Dairy Producers Conference Doubled Its Reach With Virtual

PDPW opted to make sessions available online to digital-only registrants on the day following the two-day conference, “out of respect to those who attended in person,” she said. The conference takes place on a Wednesday and Thursday, so by Friday digital participants “had access to all of it, where they can watch in a barn,” Strupp said, “or wherever and whenever it works for them.” In-person attendees also received digital access to the sessions, and exhibitors offered both in-person and online experiences, via a “Hall of Ideas Equipment and Trade Show” at the venue, and PDPW Prime, an existing online exhibition website gallery, which was expanded and upgraded this year. It is still too early to report on overall online participation — the on-demand sessions will be made available until the end of April. Economist Dan Basse discusses the current economic and trade situation during his keynote, “Ag Policy and Trade — Where’s the Bull?”

Providing a digital option along with in-person meant managing new costs, Strupp said. “It’s something that we’re not necessarily used to — it’s not a linear structure.” PDPW’s strategy was to look at what they would wish for in a perfect world, and then work with their vendors to create various scenarios that fit the reality, she said. “You have to have good partners all around. It’s just not going to work without them.”

Strupp expects digital will be a routine part of the budget in the future, she said. “The virtual component is something that we’re going to have to tie in long-term. It’s not going to be going away,” she said. It may not be part of every event, she added, “but it will be a tool at our disposal.”

Meeting in a Time of COVID

One of the main reasons PDPW chose Kalahari Resorts and Conventions as the meeting venue was the property’s demonstrated expertise hosting in-person groups during the pandemic, following guidelines recommended by the Centers for Disease Control and Prevention (CDC). “They were phenomenal,” Strupp said. There were hand-sanitizer stations at every door and at every entrance to the facilities, and signage reminding people to wash their hands and wear masks, she added. PDPW provided masks in conference bags, and asked all participants to wear them, except for speakers when they were presenting. For room set-ups, PDPW passed on classroom-style tables, and instead seated participants in chairs placed six feet apart. Some participants who were traveling together regrouped the chairs closer together, but staff was “always going [around] wiping down the chairs and spacing them back out,” Strupp said.

There was no onsite testing. “We really relied on social responsibility and personal responsibility,” she said, “asking people to stay away if they or someone in their family wasn’t feeling well.” She was not aware of any illness that was traced to the event, she said. “I think everybody took it upon themselves to really care for their own health and then be respectful to those around them.” 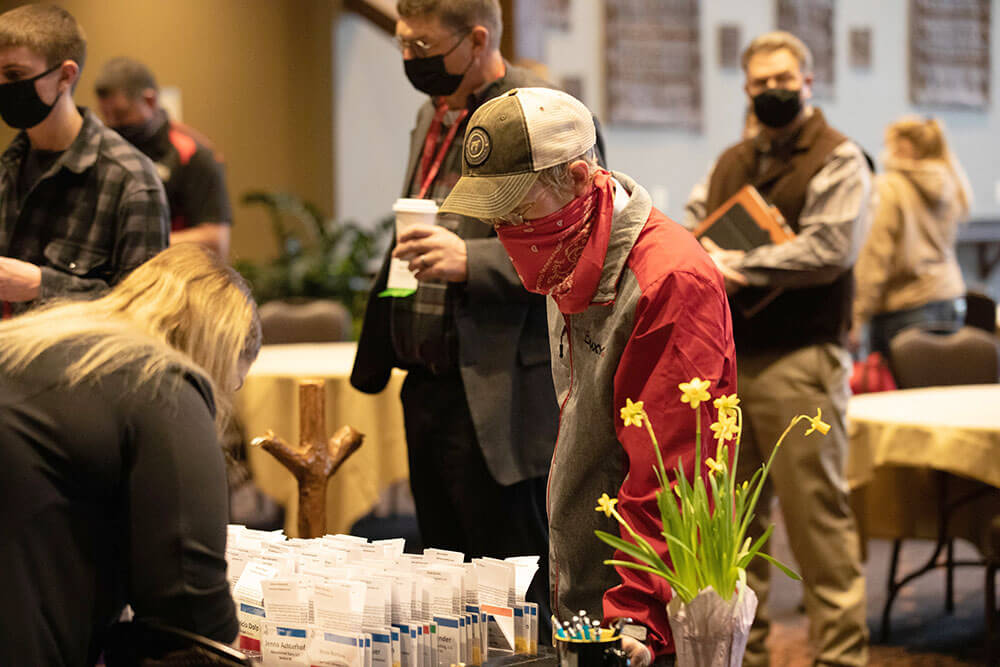 Attendees get their badges at registration. PDPW chose Kalahari Resorts and Conventions as the meeting venue because the property showed expertise hosting in-person groups during the pandemic.

The venue’s staff also excelled in modifying food service safely, replacing the meeting’s customary buffets with food served directly to individuals, so that utensils didn’t change hands, Strupp said. “They were really good at making sure that everybody’s needs were met.” In years past, the business conference included a networking reception, held in a ballroom — a tradition which didn’t seem responsible given the current need for distancing between participants, she said. Their solution was to extend the dinner hour, and to add tables and chairs placed throughout the venue, so that there was plenty of space and options for participants.

A good number of the tables were set for families: More than 94 percent of the dairy industry is family-owned and -operated. For the first time, the conference offered two hours of content each day designed for youth aged 15 to 18 years old, including sessions designed to not only introduce them to the dairy industry but to help them start developing a network of peers, Strupp said. The Kalahari Resorts and Conventions switched up the F&B experience for the event, offering individually wrapped items or serving food directly to individuals instead of buffet-style.

When the thrice-weekly, livestreamed program “The Dairy Signal” was launched, it was intended to be a way to provide resources to dairy producers amid the uncertainty of the pandemic — but it has turned out to have additional benefits, Strupp said. The content, which is sponsored by the episode as well as by the week, offers additional touchpoints for members and non-members throughout the country and outside the U.S., she said. The initiative has brought new attention and members to the organization, and also offers new opportunities for developing content, she added. “It’s a chance for us to be creative and look further down the road, to see what’s on the horizon and what things folks should have on their radar,” she said. “The fact that our speakers were all chiming in virtually has really allowed us to access folks that we didn’t always have the opportunity to tap into when we did in-person.”

Strupp expects that PDPW will continue to push the boundaries and explore new territory, she said, and the idea of what constitutes “a sense of normalcy” will continue to change. “You’re either green and growing ­— or ripe and rotten,” said Strupp, who lives on a farm that her family has owned for seven generations. “You’ve got to keep learning. If you’re not reading or engaging with your peers, and your minds, you’re not going to be bettering yourself, let alone your business.”