At the R. House food hall, with event space for groups of up to 350, guests can find poke bowls, burgers, and Korean BBQ all under the same roof. (Justin Tsucalas/Plaid Photo)

It is a steamy, mid-July evening in Baltimore, and I am struggling with possibly the most Baltimorean of tasks — picking a crab.

Even for natives, extracting the meat from a freshly steamed Maryland blue crab can be time-consuming and awkward. There is some debate about what parts should and should not be eaten. Tiny wooden mallets, gloves, and crab crackers are often involved (also debatable). So when the restaurant manager comes over to demonstrate how to “pick” the prized slivers out of the steely shells, conveniently leaving the juiciest bits on the brown paper–covered table in front of me, I am secretly elated.

My lack of shellfish-picking acumen aside, laboring over crabs is an ideal activity for this particular evening. It is the kickoff to a day-and-a-half-long media tour of Baltimore ahead of Destinations International’s Annual Convention, July 13-15, and The Choptank, a newish restaurant housed within the more-than-200-year-old Broadway Market in Baltimore’s Fells Point neighborhood, feels like an especially appropriate venue. It is noisy and hot, but after more than a year of isolation, it also feels incredibly freeing to gather again.

When we leave later that evening, the heat finally gives way to a light drizzle. Across the Patapsco River, flashes of lightning illuminate Locust Point. Standing on the edge of Fells Point, the view offers a snapshot of this city’s past and present in a single frame: On the far left, Fort McHenry, where U.S. troops fended off the British in 1814, and to right, the stark white font of the marquee for sports equipment and apparel company Under Armour, hung like a moon in the sky. American fortitude and innovation, one mile and two centuries between them. A glass replica of the flag flown over Fort McHenry in 1814 outside of the Star-Spangled Banner Flag House stretches 1,260 feet, said to match the size of the original. (Ken Stanek Photography)

The next morning, with a tight schedule and highs approaching 100 degrees, we embarked on a fast and furious bus tour of the city. Narrated by the energetic Chris Riehl, owner of Baltimore Rent-A-Tour, the tour touched on local sites of historic significance, like Babe Ruth’s birthplace and the Frederick Douglass-Isaac Myers Maritime Park Museum, home of the country’s first African American–owned shipyard. But Riehl also took time to suss out the stories hidden between these beloved landmarks. Eutaw Street, an open-air pedestrian area adjacent to Oriole Park inside Camden Yards, made an ideal venue for the opening reception for Destinations International’s annual convention in July. (Visit Baltimore)

For instance, the maritime museum is also the headquarters campus for the Living Classrooms Foundation, an area nonprofit supporting disadvantaged youth through programs like BUGS (Baltimore Urban Gardening with Students). If you walk past BUGS’ East Harbor location, you’ll spy a greenhouse and gardens where students learn to grow vegetables and run a farmers market alongside the area’s last remaining wetlands.

The more we see and the more Baltimoreans I speak to, the more I begin to understand this city’s specific brand of scrappy, hard-won ingenuity. After all, this is the “City of Firsts,” where much of what makes America, America, was born — the railroad, the industrial revolution, and Thurgood Marshall (the first African American U.S. Supreme Court justice).

That plucky kind of creativity also seems to fuel the significant number of adaptive reuse projects here, including Baltimore’s public markets. The oldest continuously operating in the U.S., the public market system serves as capsules of the city’s diverse culinary talent. We stop for lunch at one of them — R. House, an autobody shop reincarnated as a food hall near Johns Hopkins University. I have a hard time choosing between the options — everything from tacos to poke are on offer— but eventually I settle on the “Bmore BRD,” a fried-chicken sandwich laced with Baltimore’s Old Bay Seasoning, from counter-serve-stop BRD. It is simple and perfect in the way only fried chicken sandwiches can be.

Soon there will be even more opportunities for the city’s chefs and other creators to thrive — a couple of miles south, the Lexington Market is readying to open its expansion next year with more space for new and existing vendors, some of whom have operated there for decades. And in March, city officials kicked off the next phase of South Baltimore’s new Port Covington neighborhood, which calls for a revamped waterfront among other significant redevelopment projects.

Our day ends at a Baltimore icon, Oriole Park at Camden Yards. On our tour I learned that the stadium changed the course of modern ballpark design when it opened in 1992, and it remains one of the few American ballparks to sit directly within a city center. With the downtown skyline as a backdrop, it feels like the perfect place to host a summer soiree — which is exactly what Destinations International had in mind for that evening.

When our tour ends, the opening reception is already in full swing along the ballpark’s pedestrian Eutaw Street. Between the view, the Sagamore Rye whiskey cocktails, and the occasional bright orange flash of an Orioles jersey, there was no mistaking where we were. 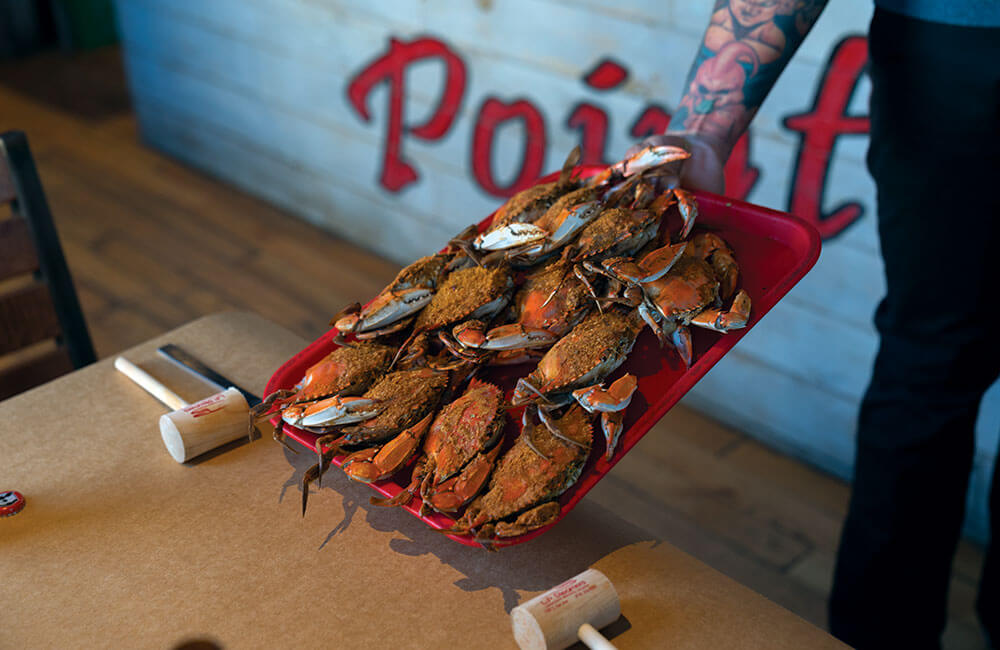 Picking Maryland blue crab is a tradition at many Baltimore restaurants, including L.P. Steamers in the Locust Point neighborhood. (Devin Allen/VIsit Baltimore)

“Beneath the Shell,” a poem by Baltimore author and poet Kondwani Fidel, was exclusively commissioned by Visit Baltimore, which has made it a point to highlight local creative talent in its messaging and campaigns. Listen to Fidel recite his poem in the video below. For more details on the city’s maker community and how to incorporate it into a meeting or event, visit baltimore.org.