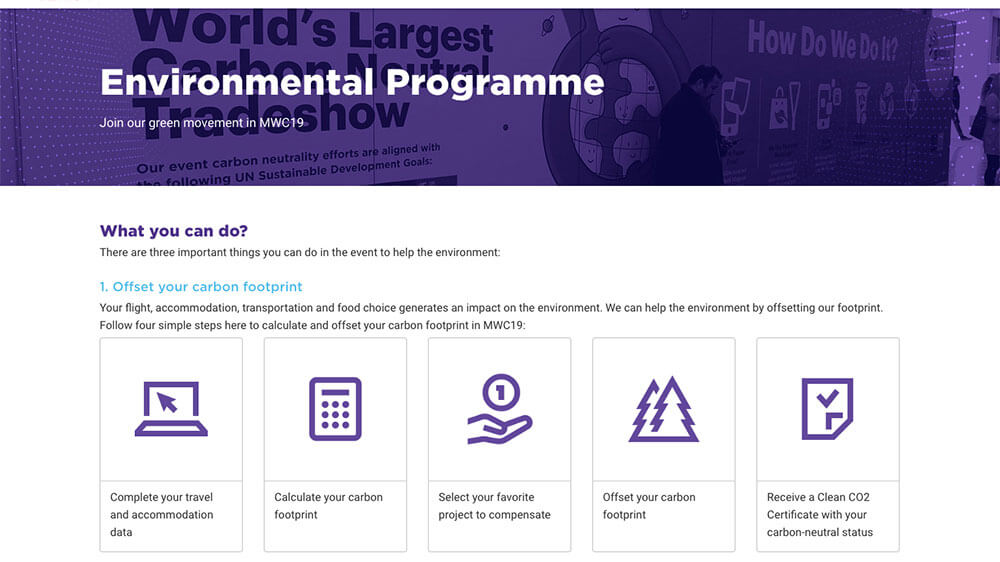 Barcelona’s Mobile World Congress offers an ambitious environmental program where participants can contribute directly by offsetting their carbon footprint, recycling their badge, and minimizing the impact of their travel and on-site participation.

By Jenny Ennis and Fanny Senez

Jenny Ennis, meetings manager for the European Society of Sports Traumatology, Knee Surgery and Arthroscopy (ESSKA), and Fanny Senez, events manager for the International Association of Young Lawyers (AIJA), look at an association conference that has left a positive legacy. Avoiding a negative legacy is just as important as creating a positive one. And environmental concern is one area that is increasingly taken into consideration in regard to an event’s legacy by event organizers and associations.

Barcelona’s Mobile World Congress (MWC) is known in association circles as one of the largest events of its kind, attracting more than 107,000 attendees and more than 2,400 companies each year. For years now, event organizers have set up an ambitious environmental program where participants can contribute directly by offsetting their carbon footprint, recycling their badge, and minimizing the impact of their travel and on-site participation. The congress has been certified carbon neutral from 2014 to 2018 and was recognized as “the world’s largest carbon neutral trade show” by Guinness World Records in 2017 and 2018.

On a larger scale, the carbon neutrality program aims to reduce the impact of business on the environment, including at the office. Again, these goals were achieved through strong local partnerships with area authorities, such as the Barcelona City Council, L’Hospitalet de Llobregat City Council, and Fira Barcelona.

Meanwhile, an interesting initiative that provides tangible legacy impacts on local social and cultural entities is the MWC Donation Room, where all exhibitors can donate materials from their stands to local socially responsible organisations. In 2018, 31.5 tons of materials were collected and redistributed to 20 selected local organizations.

The MWC is also an interesting case to look at from a population perspective. Not so long ago, legacy programs became a priority in the city following the negative press coverage of residents protesting against the increasing number of visitors that were not just as a result of tourism, but also due to large events.

Legacy may be realistically seen as a future “must” for associations. And if organizers have the budget to lead the way, sometimes supported by consultancies, smaller associations can actually knock at the door of convention bureaux and local authorities to inquire what simple actions can be taken.

The millennial generation entering the association workforce may also play a strong role in the development of new kinds of association social responsibility policies. They will undoubtedly help organizations turn their vision and mission into tangible realities.