Usually you can accuse a corporate marketing team of overselling things, but when it comes to Universal Orlando Resort’s “meeting enhancements” program, the opposite might be true. When you’re talking about huge, anthropomorphic cars-turned-robots, or the pudgy, bright-yellow, pidgin-French-speaking stars of a beloved animation franchise — maybe something more than “enhancements” is called for.

Transformers and Minions both made the scene during a press trip hosted by Universal Orlando Meetings & Events and tied to digitalNow, which was held at Universal Orlando’s Loews Royal Paciﬁc Resort on May 9–11. The goal was to show off the sprawling theme-park resort’s ﬁve (soon to be six) on-site hotels, all Loews properties, as well as the many attractions and experiences that can enhance — okay, yes, enhance — group programs. Mission pretty well accomplished. Designed to look like the eponymous property on the cover of the Eagles’ “Hotel California” album, the Hard Rock Hotel Universal Orlando has 650 rooms and a palm-lined swimming pool. (Universal Orlando Resorts)

Soon to be Six

Universal Orlando encompasses two theme parks (Universal Studios Florida and Islands of Adventure), a brand-new water park (Volcano Bay), a dining and entertainment complex (Universal CityWalk Orlando), and those ﬁve hotels — most of it sitting on or around an artiﬁcial bay, making water taxis a convenient and fun way to get around. So that’s how we began, cruising from the Loews Royal Paciﬁc, our host hotel, to the Loews Portoﬁno Bay Hotel.

Each property has its own theme. Royal Paciﬁc’s is South Seas, and Portoﬁno Bay’s is, well, Portoﬁno — complete with a recreation of the gorgeous Italian ﬁshing village’s historic harbor. An aria from “Rigoletto,” recorded from Portoﬁno Bay’s live “Musica della Notte” program and piped throughout the harbor-side piazza — and a tray of cold Bellini cocktails — greeted us as we docked. With 750 guest rooms and suites but “just” 42,000 square feet of event space, Portoﬁno Bay is a “boutique” option, Director of Conference Management Bridget Jackson half-jokingly noted, compared to some of Orlando’s mammoth event facilities. Another ride on the water taxi, and we were arriving at the Hard Rock Hotel Universal Orlando, which is designed to look like the eponymous property on the cover of the Eagles’ “Hotel California” album. It’s another relatively intimate venue, with 650 guest rooms and suites and 7,000 square feet of event space. Meetings can take advantage of rock-star touches such as name badges that look like backstage concert passes and an outdoor space called the Woodstock Lawn, plus the Hard Rock brand’s usual eye-popping collection of rock-and-roll bric-a-brac.

From the Hard Rock we sailed to the Loews Sapphire Falls Resort (theme: Caribbean), where we met with Vince LaRuffa and Eric Marshall, senior vice president of resort marketing and vice president of park sales, respectively, for Universal Orlando. The two provided an overview of the company’s meetings and events portfolio: ﬁve hotels with a combined 5,408 guest rooms and suites and 295,000 square feet of indoor meeting space; a sixth property now under construction — Hotel Aventura — and scheduled to open next summer with 600 guest rooms; and options like a New York City block party (at Universal Studios Florida), attendee rides on the Hogwarts express (between Universal Studios’ and Islands of Adventure’s Wizarding World of Harry Potter attractions), and visits from Transformers, Minions, and other branded characters. 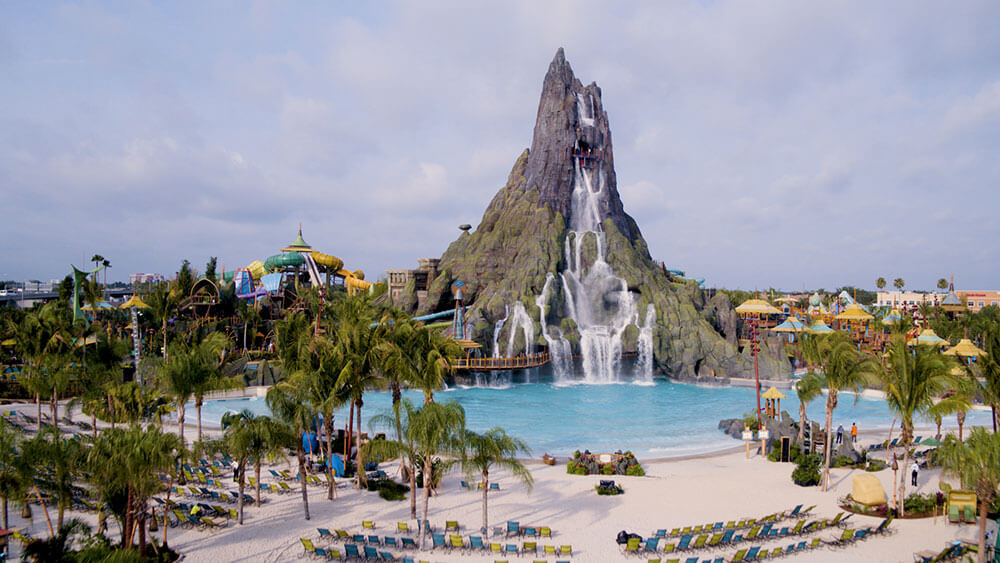 Could this be magic?

The next morning, we spent a few hours at digitalNow, then headed off to truly experience Universal Orlando. A shuttle bus took us through a back entrance to Islands of Adventure — an option available for groups — and dropped us behind the scenes. We walked to the Wizarding World of Harry Potter – Hogsmeade, a fanatically detailed recreation of the British village featured in the globally famous books and movies, with shops and attractions that will please Potterphiles and neophytes alike. Parts or all of Hogsmeade are available for fully themed private events.

At Hogsmeade Station we boarded the Hogwarts Express for a ride to Universal Studios’ Wizarding World of Harry Potter – Diagon Alley. The train ride is itself an attraction, with riders facing one another in an old-style passenger cabin and watching a dramatic story unfold through the windows. We disembarked at King’s Cross Station and entered Diagon Alley — another ﬂawless imagining, this time of a crowded London street that exists in the shadow of the non-magic world.

We rode Diagon Alley’s featured attraction, the thrilling “Harry Potter and the Escape From Gringotts;” sipped butterbeer, which registers notes of cream soda, butterscotch, and short-bread; and strolled through foreboding Knockturn Alley and into the Leaky Cauldron tavern.

Then it was time to return to the Muggles. (Look it up, non-fans.) We exited Diagon Alley and headed for Universal Studios’ New York City streetscape, a back-lot Little Italy where groups can hold themed block parties with newsboys, gangsters, and speakeasies. The theme park’s newest ride is also there, and we got to ride it: “Race Through New York Starring Jimmy Fallon,” a 3D motion-simulator that whips you around and above Manhattan with the “Tonight Show” host. Even that has something special for groups — the Jimmy Fallon VIP Space, a corner room on the second ﬂoor of the New York area’s 30 Rockefeller Plaza building, where we had lunch served from buffet stations that included an avocado bar, sushi, pasta, and other fresh, delicious offerings.

The Wizarding World of Harry Potter – Diagon Alley is filled with incredible entertainment experiences for the whole family, including the Leaky Cauldron restaurant. (Universal Orlando Resort)

That evening, we took a shuttle to CityWalk and got to see how groups might use the entertainment complex — taking over some or all of it for a block party, or having a private event at a restaurant like the NBC Sports Grill & Brew, Antojitos Authentic Mexican Food, or Pat O’Brien’s, an exact replica of the famous New Orleans bar that gave the world the hurricane cocktail. For dinner we ended up in a private room at the Toothsome Chocolate Emporium & Savory Feast Kitchen, a steampunk-inﬂected wonderland that serves up savory entrees and decadent desserts.

We spent the next day at digitalNow, then regrouped at Universal Studios for digitalNow’s evening reception, which started with dinner at Jurassic Park’s Thunder Falls Terrace, followed by exclusive access to the stunning “Skull Island: Reign of Kong” ride. Dessert was a short walk away, in Marvel Super Hero Island, with more exclusive access — to “The Incredible Hulk Coaster,” “Doctor Doom’s Fearfall,” and “The Amazing Adventures of Spider-Man” ride. Best of all, digitalNow had the entire space to itself, which, like the rest of our time at Universal Orlando, made for a truly enhanced experience.