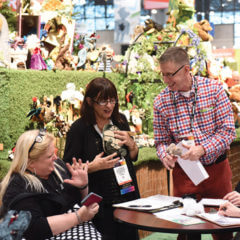 The North American International Toy Fair is held each February, but for many attendees the event never ends. That’s because The Toy Association, which hosts the 30,000-attendee trade show at the Javits Center in New York City, created ShopToys365.com: a free platform that lets buyers and sellers build relationships year-round, without (gulp) needing to wait for a trade show. So doesn’t that undermine the very idea of a trade show?

“I would argue the opposite,” said Kimberly Carcone, vice president, market events, for The Toy Association. “People still crave the face-to-face experience. And seeing a product, and touching it, is different than looking at it online. But Toy Fair is just four days out of the year. ShopToys365 provides the opportunity to connect, to buy and sell products, to develop relationships, year-round. It’s a way to keep things going.”

Seeing new products is the Toy Fair’s biggest draw: The event attracts more than 1,000 exhibitors showing roughly 7,000 products across 440,000-plus square feet of space. “The focus is for buyers and sellers to conduct business and for the media to see what’s new and report on the trends,” said Carcone. The Toy Fair also offers some educational sessions and the Toy of the Year Awards, but innovative ideas like the web platform, she believes, are a big reason why overall attendance grew 12.6 percent from 2015–2017 and international attendance rose more than 30 percent. “ShopToys365 isn’t a threat to the Toy Fair,” she said. “It’s an enhancement.”

One reason for the growth of international attendees is a robust global-outreach program. The association works with a PR agency headquartered in the U.K. that Carcone communicates with almost daily. Their efforts include advertising campaigns and editorials; Q&As with the association’s president, Steve Pasierb, have appeared in trade magazines in Europe, Asia, South America, and the Middle East.

The association also hosts an international media delegation at Toy Fair. The roughly 20 editors, primarily from trade publications, experience the show first-hand, attend trend sessions, and participate in an exclusive press conference with Pasierb. “They share their insights with readers all year long,” Carcone said. “I think we’ve seen a lot of success on the international front because we’ve taken the time to share the Toy Fair’s relevance.”

The event attracts more than 1,000 exhibitors showing roughly 7,000 products across 440,000-plus square feet of space.

New companies often launch their first product at Toy Fair, and Carcone is committed to helping what they call the “freshman class” succeed. Services include special webinars and a freshman-class advisor who communicates with newbies every week. On the Friday before the exhibit floor opens, Carcone and her colleagues host a one-hour Rookies and Cookies orientation for first-time exhibitors, where they enjoy, yes, cookies and milk. “It’s an opportunity to ask any last-minute questions and meet the team that has been supporting them,” Carcone said, “whether it’s the Toy Association staff, the Javits Center staff, or our general contractor staff.”

First-time exhibitors are placed in their own dedicated hall called Launch Pad, a Toy Fair feature for a number of years. By locating them in one neighborhood, they enjoy camaraderie and exposure. “We make it well-known to buyers and to the media where their first stop should be,” Carcone said, “because in the Launch Pad you’ll see things you’ve likely never seen before.”

Toy Fair features specialized product zones, which helps buyers and the media find what they need. “If reporters want to write about dolls or outdoor toys, they can go to specific zones on the floor,” Carcone said. The association also has a buyer-relations program to obtain input and maintain contact throughout the year. “There are a lot of other smaller, regional, more specialty-focused events, but Toy Fair is the granddaddy of the toy- and play-industry marketplace,” she said. “We want to make it as easy and enjoyable as possible.”

Enjoyment is a key part of the Toy Fair experience. “When you come into the Javits Center before the move-in, it’s this cavernous, empty place,” Carcone said. “And within a few days it’s a colorful playground. People smile when they walk the floor. I’m sure that sounds corny, but it’s not. I’m sitting here talking about this and my eyes are watery and I’m sniffling, because I’m part of an industry that can change a person’s life, can make a bad day good, can make a childhood bright. I have the best job in the world.”

Attendance at the Toy Fair is limited to buyers and sellers: No kids allowed. But with the rise of events like Comic-Con, where fan experiences boost brand loyalty, The Toy Association knew it was missing out on an opportunity to help companies connect with their actual consumers. The result? Play Fair, a weekend consumer event that launched in 2016.

“Families show up an hour-and-a-half before the doors open,” said The Toy Association’s Kimberly Carcone. “It’s an opportunity for brands to play with their customers and create more of a fan experience.” Activities range from touring a Lego sculpture garden to seeing the world’s largest pool of slime. How successful is it? The second Play Fair, held Nov. 4–6 at the Javits Center last year, attracted 20,000-plus kids of all ages.

Learn about the Toy Fair at toyfairny.com. Go to shoptoys365.com to see the platform for attendees.