When I landed at Palm Beach International Airport in early December for a familiarization trip hosted by Discover the Palm Beaches — which represents 39 diverse communities in Southeast Florida — I had no preconceived idea about what kind of experience awaited me. My previous travels to Florida hadn’t extended far beyond Orlando’s Walt Disney World, and so I’d never had a chance to see the Sunshine State’s other offerings.

Once we arrived at the serene Waterstone Resort & Marina in Boca Raton, the first of two hotels I’d be calling home during my four-night stay, I realized I’d be seeing a whole different side of Florida. The 139-room, Four-Diamond boutique hotel, which features 8,500 square feet of flexible event space, towers over the tranquil Atlantic Ocean and Intracoastal Waterway.

I only had moments to check in to my room before I was whisked away to see the Intracoastal Waterway up close, as I took my first ride on a catamaran courtesy of Palm Breeze Charters. I got to know my fellow fam trip attendees — press from all around the U.S. — as we oohed and aahed over the stunning mega mansions lining both sides of the Intracoastal. As the sun set, the properties twinkled with Christmas lights outlining roofs and wrapped around palm trees, a holiday scene unfamiliar to this Northerner.

We returned to Waterstone and chased away the chill from our breezy boat ride with cocktails and a meal at Boca Landing, the hotel’s luxurious waterside restaurant I ordered the black truffle ravioli as Chef Kelley Randall prepared fresh, creamy mozzarella tableside to accompany our meal. I went to bed thinking that if the rest of the trip was half as lovely as that Intracoastal ride and half as delicious as that insanely good mozzarella, I would be very happy. 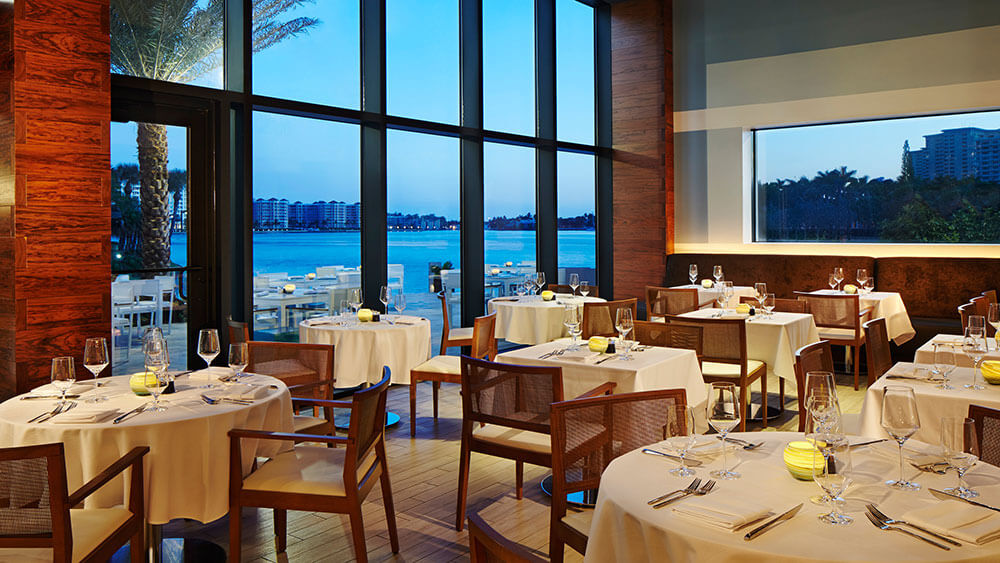 We began our only full day in Boca Raton with the activity that had excited me the most when I had first seen our fam itinerary — taking an “off-the-grid” VIP tour of Lion Country Safari, America’s first drive-through wildlife preserve that was founded in 1967. In our own van, ideal for private groups, we got up close and personal with majestic lions, petted rhinos, and observed the heart-warming ways the caretakers interact with the preserve’s biggest personalities, the chimpanzees. It was this animal lover’s dream come true.

After a full-on safari, we’d worked up an elephantine appetite. Larry, our trusted driver for the duration of our time in the Palm Beaches, blasted showtunes (which had us humming The Osmonds music for days). We grazed on incredibly fresh, healthy lunches at Farmer’s Table, including wild-mushroom and goat-cheese flatbread, and arugula and roasted-beet salad, paired with alcohol-free elixirs made with organic fruits and turmeric.

At our next stop, we continued the thread of wildlife preservation at Gumbo Limbo Nature Center, which serves as a rehabilitation center for sea turtles who have been injured by boats or have consumed such hazards as plastic or fishing hooks. We met sea turtles Peter Parker and Odin and learned about the organization’s extensive sustainability efforts in Palm Beach County. Gumbo Limbo teams up with 4Ocean — a Boca Raton–based organization that sells bracelets made from recycled materials to help fund trash-removal from the oceans and coastlines — for beach clean-ups, which can be incorporated into a CSR activity for event groups visiting the Palm Beaches.

After a day spent mostly among nature, we all slipped into something a little more formal for a night out on the town. We ate homemade Italian cuisine at Louie Bossi’s, a dark and cozy Italian restaurant in downtown Boca Raton where I enjoyed a classic spaghetti dish. As we clinked glasses of grappa, we toasted to our full and memorable day. Visitors can get up-close-and-personal with animals at Lion Country Safari in Loxahatchee, Florida.

A Little Piece of History

The second half of our trip, in West Palm Beach, was unexpectedly historic. The area, first designed as a travel destination for affluent tourists in the 1890s, continues to be a hotspot for the rich and famous, with both a “Millionaire’s Row” and “Billionaire’s Row” on Palm Beach Island. For those who are not in the know, the millionaires get a view of the ocean, while the billionaires are surrounded by water views of both the ocean and the Intracoastal.

Our accommodations were on an island in the town of Manalapan, in the Eau Palm Beach Resort & Spa. I was struck by the glamorous vibe of the Five-Diamond resort as soon as I walked into the lobby. The property sits on what was once La Coquille, a private club where the Vanderbilts and Rockefellers socialized and Frank Sinatra performed. While the original property was knocked down and rebuilt as a Ritz-Carlton in the 1990s, this resort still has managed to retain the original club’s elegance, which was carried over once again when the property became Eau Palm Beach Resort & Spa in the early 2000s. Decorated by renowned designer Jonathan Adler, the resort’s 309 guest rooms pop with vibrant blues and yellows — echoing the hues I saw at sunrise from my balcony overlooking the ocean. I spent a good deal of time in that spot, on a hanging egg-swing, over my two days on property.

We started off in West Palm Beach with a driving tour of the Downtown Convention District. Life coach Tony Robbins was holding an event at the Palm Beach Convention Center while we were in town, so security concerns prevented us from stepping inside. But that didn’t stop us from seeing how connected and walkable the Downtown Convention District is: Attendees strolled over to the convention center from nearby hotels, or took a break from the event across the street at Rosemary Square, a town center with dining and shopping outlets, apartments, and a Brightline station — a high-speed train (soon to become Virgin Trains) that connects West Palm Beach to Fort Lauderdale and Miami.

We ended our tour with lunch at a rooftop restaurant above the four-story, 800,000-square-foot Restoration Hardware — yes, the furniture store. The retail space itself is impressive, with opulent light fixtures and gold mirrors hung throughout, but the restaurant is even grander: A fresh, French-inspired, black-and-white affair, with marble floors, relaxing fountains, and views of the city. It looked like a mirage, but that could have been because we were hungry — which was quickly fixed after we deliberated over whether the scrambled eggs or avocado toast sounded better. They were both delicious. Getting in the Spirit(s)

It was then time to take a behind-the-scenes tour of Steel Tie Spirits Co., the largest distillery in the Southeastern U.S., followed by hitting the links at Drive Shack, a golf entertainment center that can accommodate up to 1,200 for a private event. Our virtual golf game scores were weak — perhaps because the rum and vodka tastings we had at Steel Tie Spirits Co. just shortly before, were strong. We headed back to the hotel to freshen up and prepare for dinner at Angle, described by the resort as “farm to very elegant table.”

That description did not disappoint. We sat at the dining room’s centerpiece, an under-lit onyx and amber table, as the resident pianist played classic and contemporary tunes for us. As we called it a night, I wondered how different the lobby looked compared to the days when the Vanderbilts frequented the original property. Probably not much, even though dress styles have changed. The space was filled with gentlemen in tailored, colorful suits and women in evening gowns, ready to enjoy exclusive parties in the property’s 30,000 square feet of event space. I eased into my final day by getting a facial treatment at Eau Palm Beach’s 42,000-square-foot spa, an experience that started with lighting a candle and letting it float away as I made an indulgent wish for myself and ended in absolute serenity in the “Self-Centered Garden,” a courtyard filled with hanging chairs and dipping pools.

Feeling renewed, I ventured out with my group to Grandview Public Market, a modern take on a food hall and the latest addition to the area’s up-and-coming Warehouse District. I mulled over my options carefully — including poké, pizza, and fried chicken, among other food vendors — and ultimately settled on Mexican before taking my meal out to the hall’s expansive outdoor seating area. It was the ideal weather — a perfect 70 degrees — and spot to enjoy our final lunch outing. We discovered what’s new and next in West Palm Beach by taking a hardhat tour of The Ben, an Autograph Collection hotel. When it opens this month, the 208-room boutique hotel will have the only rooftop ballroom downtown, offering views of the Palm Harbor Marina and Intracoastal Waterway.

For our final meal, we were given a tableside pimento cheese demonstration at The Regional Kitchen & Public House. It mirrored my first evening in Boca Raton, watching mozzarella be prepared for our group, and it was hard to believe that my trip was ending. The visit wasn’t half as good as that catamaran ride I took and mozzarella I enjoyed on day one — it was twice as good.