Nutritionist Haleh Moravej combines teaching and cooking as a way to get her students excited about sustainability, health, and wellness. (MetMUnch photos)

Haleh Moravej, a senior lecturer in nutritional sciences at Manchester Metropolitan University (MMU) in Manchester, U.K., started MetMUnch, an award-winning student social enterprise, nine years ago as a way to get her students excited about sustainability, health, and wellness across the university and the city of Manchester. Moravej, an entrepreneur and registered nutritionist who formerly operated a clinic, was betting that if students cooked and served locally sourced food at imaginative pop-up events, they — and the public — would learn about nutrition and sustainability in ways that were likely to make an impact.

The organization started out small — with just one table, one tablecloth, and a budget so tiny that cabbage soup was the only dish it could afford to cook, Moravej recalled. But the MetMUnch students, under Moravej’s direction, served the soup with such panache that within two months, the Manchester Children’s Book Festival commissioned the organization to provide sustainable catering at its annual children’s event.

“If you can make cabbage soup sexy,” Moravej told Convene, “you can do anything.” The organization grew steadily from the beginning, “almost like an underground movement,” Moravej said, and within three years, had won the top international award from the U.K. and Ireland’s Alliance for Sustainability Leadership in Education. Award judges cited MetMUnch’s creativity and its ability to engage its audience. “We don’t do ordinary!” has become the MetMUnch motto.

Over the years, that has translated into events at universities, galleries, and shopping centers, as well as demonstrations at festivals and science museums, ranging from an art installation made from fair-trade chocolate handprints to a sushi-making workshop featuring edible insects. MetMUnch also works with conferences that come to the university, including designing and presenting a kimchi-making workshop for 400 attendees at the 35th International Conference on Geochemistry and Health (ICGH), held at the university’s Business School, July 1–5, 2018. Kimchi made by attendees at an international geochemistry and health conference in the MMU Business School.

During the workshop, students led participants in learning about the science and nutrition of fermentation, as they got their hands messy making kimchi with cabbage and other vegetables, and vinegar, sugar, and soy sauce. Moravej, whose university appointment is evenly split between academic staff and university facilities and services staff, both presented a keynote at the lecture and worked with students to organize and present the workshop.

“Food is a great connector,” Moravej said. “Especially for younger people, I think when it’s the first-ever conference,” she said, or for academics who are in the early days of their research, a conference can be “quite a daunting place. I think it is quite a scary thing, especially if you’re not the master of networking to start with.”

The experiential, interactive workshop also served a learning purpose, making the conference more memorable, added Moravej, who has received numerous teaching awards. The feedback she got from ICGH organizers was that, following the success of the kimchi-making workshop, they planned to add more interactive elements to their upcoming conference in China, as an alternative to lecture-based, classroom-style sessions. With the ubiquity of webinars and online learning, “conferences have become places, that when people are there, you have to make it different,” Moravej said. “We have to do a lot more to make it interesting and engaging. People have to have something to remember in order to take the event away.” 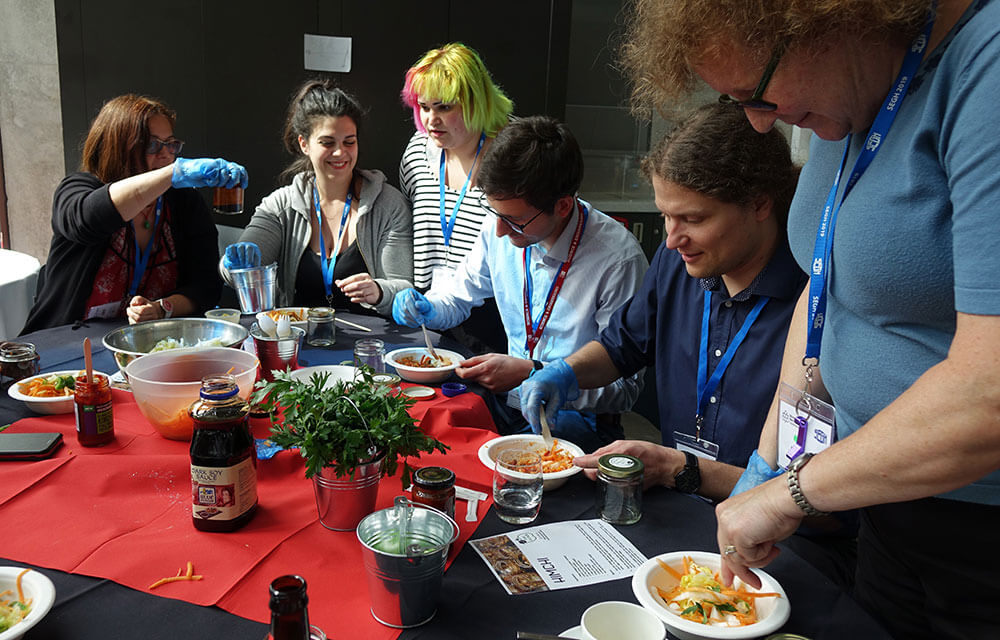 Attendees at an international geochemistry and health conference make kimchi in the MMU Business School.

Convene talked with Moravej during a press trip to Manchester in the colorful, plant-filled Grow Café that opened last fall in MMU’s Business School atrium, as a partnership between MetMUnch and the university’s catering services. The new space will expand MetMUnch’s ability to collaborate with university catering and facilities staff to offer interactive workshops and sustainable food service for conferences, Moravej said.

Students worked with the university’s executive chef to develop meat-free, vegan, and vegetarian menus, and designed the interior, filling it with communal wooden tables made of recycled scaffolding. (Students wanted to build the tables themselves, but lawyers nixed the idea for safety reasons, Moravej said.) The chairs also are recycled, handed down from the local city council chambers, and repainted in shades of orange, turquoise, pink, yellow, and spring green. Herbs planted in tin pails sit on the tables.

MetMUnch events celebrate food, Moravej said, “but also that massive creative element that really gets people excited. There’s nothing wrong with getting people to do a bit of the cooking [at conferences]. You could do something that maybe is raw; you could make some protein bowls really quickly. I think people are so driven by computers and things like that,” she said, that they “get really excited” when they are allowed to engage.

“We just want to kind of take it to that next level” with conference food, Moravej said. “I think it’s time for a bit of a revolution, for pushing the boundaries and doing things differently.”

The Grow Café and Moravej’s interactive programs allow MMU to embed the university’s research and expertise into the events held on campus, including its emphasis on sustainability, said James Charnock, MMU’s sales and marketing officer for conferences and events. In alignment with the city of Manchester, MMU has set a goal of being a zero-carbon university by 2038.

“Sustainability in a playful way is going to be so much more effective, I think, than if we punish people,” Moravej said. “Behavioral change has to happen in an interesting, maybe even subconscious, way,”

Attendees and organizers of conferences held at the Manchester Metropolitan University (MMU) have a seamless way to make a meaningful impact on the local city. For every event, £1 ($1.31 U.S.) a day per delegate goes to the Big Change Street Support Network, a central city fund that supports the needs of homeless individuals in the city. For example, for a 300-person event held over three days, £900 would be donated to the fund, MMU’s James Charnock said.

The fund is part of the city’s Manchester Homelessness Charter, created by nonprofits, city government, police, health, community and faith groups, along with businesses, universities, and concerned citizens — and including people who have experienced homelessness, who help make decisions about how the money is spent.

“It’s a scheme I’m really proud of,” Charnock said, “as it really helps people on a day-to-day basis. Imagine not being able to afford a toothbrush, or sanitary products, or a bus ticket?” Got to the the Big Change Street Support Network for more information.