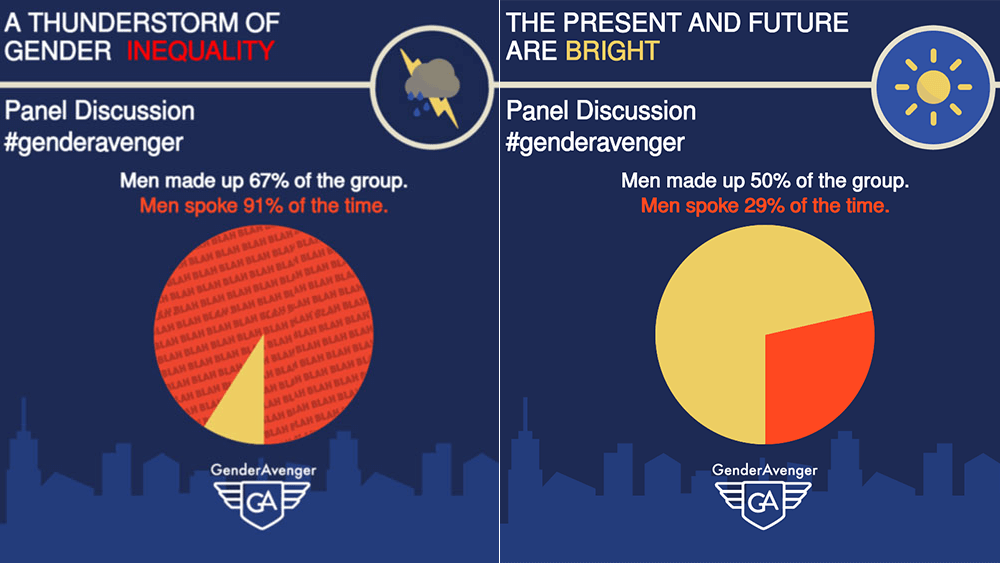 The Gender-Avenger Tally app records and reports on gender balance and imbalance at conferences and other public events.

Earlier this year, there was a big drop-off in the use of the Gender-Avenger Tally app, a gender and inclusivity calculator used to record and report on gender balance — and imbalance — at conferences and other public events. The app was created by GenderAvenger, a five-year-old initiative founded to make sure that women’s voices play a part in public conversations.

That dip undoubtedly reflected the decline in events — when Convene surveyed meeting professionals in early April, 87 percent had canceled an event as a result of the pandemic — as well as the way that the spread of COVID-19 around the world profoundly reshuffled our lives.

But the use of the Tally app — which can be used to record the number of men, women, women of color, and non-binary persons on a panel or on a speaker list — has picked up again as all manner of meetings have moved online, reports Gina Glantz, GenderAvenger co-founder.

And some users are not liking what they see in terms of gender balance. One female executive, Dana Denis- Smith, a former lawyer, journalist, and CEO of Obelisk Support in London, said this via Tweet in early May: “[S]ince lockdown and the new Zoom world, I have certainly seen a rise of manels in all sectors, as if [when] we are all at home and not in one big conference center, we can’t see what’s coming across the screen.”

It’s imperative that conference organizers and participants stay vigilant about equity and inclusion in the virtual meeting space, Glantz told Convene during an interview conducted on Zoom. “There really are no excuses why there shouldn’t be gender balance.” Some of the excuses that conference organizers have used in the past — including that women are reluctant to travel — vanish when it comes to virtual events, she said. Women can participate in conferences in front of their laptops, without the need to invest the time in travel, Glantz said. Organizers who create agendas that aren’t inclusive aren’t being smart or aren’t working hard enough, she added.

Glantz said she has seen a shift over the years from organizations either dismissing or ignoring criticism when their inequities are pointed out to now taking them seriously. But she has noticed, she said, “there seems to be some tendency towards returning to men as the default authorities in a time of crisis. I just don’t want to see the transitions we’re going through to result in any backsliding,” she added, in that progress.

Even if there are more women on the agenda, it doesn’t necessarily mean they will have an equal voice, Glantz pointed out. “We’ve found in the past that there could be a 50/50 gender balance, but that men would talk 75 percent of the time,” she said.

Those gender disparities are even more striking online, according to Deborah Tannen, a professor of linguistics at Georgetown University who has been studying how men and women speak for decades. “The bottom line,” Tannen said in a recent New York Times article about men dominating online conversations, “is everything we think is going to be an equalizer turns out not to be.”

GenderAvenger designated May as “Who’s Talking?” month and encouraged app users to record and report how much time women have the floor during meetings. “For generations, women’s voices have been silenced or quieted by manels and men dominating the public dialogue,” Glantz wrote. “This new and growing culture of virtual events is an opportunity for all of us to upend gender imbalance both now and for a stronger, better future.”