It wasn’t the elephant in the room so much as the elephant and donkey in the room. Convene participated in a press trip to Little Rock, Arkansas, that began on Nov. 9 — the morning after Election Day. In the immediate aftermath of the long and contentious presidential campaign, it was a little surreal to land in a city where the Clinton name is everywhere, from Bill and Hillary Clinton National Airport, to President Clinton Avenue, to the William J. Clinton Presidential Center and Park.

But such are the graciousness and hospitality in Little Rock that it simply wasn’t an issue. We were there to experience the destination as guests of the Little Rock Convention & Visitors Bureau (LRCVB), and politics never came up. What was important was that we enjoyed ourselves and discovered the city’s unique offerings. And we most certainly did. After checking in to the stately, handsome Capital Hotel, our small group of journalists met up in the lobby, where the dominant theme of the trip immediately revealed itself: food. It was lunchtime, and our hosts, LRCVB Vice President of Marketing and Communications John Mayner, CDME, and Communications Manager Libby Doss Lloyd, took us straight to the hotel’s Capital Bar & Grill, well known for its modern takes on Southern comfort food, such as fried chicken and red beans and rice.

With lunch stuck to our ribs, we drove up President Clinton Avenue, through the River Market District, formerly a desolate stretch along the Arkansas River, today a revitalized 10-block neighborhood anchored by the Clinton Presidential Center. Built on a brownﬁeld site that’s now an oasis of green parks, the LEED Platinum–certiﬁed center is home to the Clinton Presidential Library and Museum, the University of Arkansas Clinton School of Public Service, and the Little Rock offices of the Clinton Foundation. The long, boxy, glass and steel building — designed to echo the six bridges stretching across the Arkansas River — also offers a variety of indoor and outdoor event spaces, including the 5,107-square-foot Great Hall and terrace and the 18,188-square-foot Scholars Garden. A short walk found us at the headquarters of Heifer International, whose self-described mission is “to work with communities to end world hunger and poverty and to care for the Earth.” Also LEED Platinum–certiﬁed, Heifer’s campus sits on the same brownﬁeld plot that was rehabbed for the Clinton center, and now supports thriving wetlands. The offices are a marvel of sustainability and style, built almost entirely from materials found within 500 miles of Little Rock, and offer not just traditional conference space but experiential learning facilities such as Heifer Village, a hands-on education center for people of all ages, and Heifer Farm, whose vegetable gardens and animal products are used on site at the Café@Heifer.

Another easy stroll and we were at Rock Town Distillery, an award-winning craft distillery that’s taken over a building in East Village, Little Rock’s old warehouse district. Rock Town is another locally sourced success story, using bottles and barrels made in Arkansas, and grains grown there. Between invigorating sips of small-batch bourbons, gins, and vodkas, we learned that the distillery is available for groups and private events, including bottling parties and receptions.

We had an hour or so to decompress back at the Capital Hotel, after which the Southern spirit demanded that we be fed again. On our way to dinner, we stopped at the Esee Purse Museum, a small, quirky space on Main Street that uses handbags and their contents to explore “the evolution of the 20th-century American woman.” And yes, it’s available for private groups. 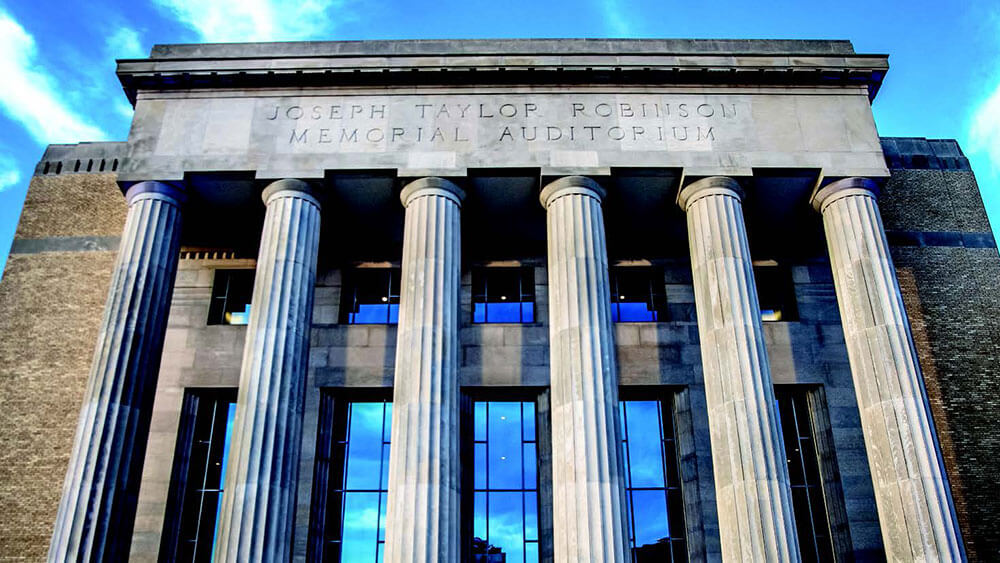 The impetus for the press trip was the grand reopening of the Robinson Center, Little Rock’s premier performing-arts venue. But ﬁrst, we had to eat. After breakfast at the Capital Hotel’s elegant One Eleven (buttermilk biscuits with sausage gravy, if you must know), we toured the property — a grand dame built in 1870, with 94 guest rooms and suites, ﬁve meeting rooms totaling 6,400 square feet, and an abnormally large elevator into which Ulysses S. Grant is rumored to have ridden his horse.

The conference center connects directly to the DoubleTree by Hilton Hotel Little Rock, which was our next stop, ﬁrst for lunch, at Bridges Restaurant & Lounge (me: shrimp and grits; very good), then a tour of the property, with 288 guest rooms and 20,000 square feet of meeting space. We went from there to another beautiful downtown property just two blocks away: the Little Rock Marriott, offering 418 guest rooms and 34,000 square feet of event space. And the Marriott has its own direct connection — to the Statehouse Convention Center, in the heart of downtown, with 220,000 square feet of meeting and exhibit space.

That evening, we returned to the Robinson Center for a Clinton School Speaker Series panel discussion featuring Stodola, Hall, and members of the architecture team that worked on the renovation project. After a post-discussion reception on the Robinson Terrace, where we were dazzled by the LED lights that nightly illuminate the three downtown bridges over the Arkansas River, it was back to the Capital Hotel — for, you guessed it, something to eat.

Dinner was in the Capital Cellar, the hotel’s wine cellar, which is accessible through the kitchen. The intimate, romantically shadowed room is available for select small groups, with a custom menu that’s guaranteed to please, if the beautifully grilled steak I enjoyed is any indication.

SEGWAY TO THE PAST

Our ﬁnal day in Little Rock began, oddly enough, with a meal. @ The Corner is a diner that uses seasonal local ingredients in its hearty plates, including — to pick an example at random — the Big Dutchman Burrito, with sausage, eggs, onions, peppers, potatoes, and red-pepper jelly.

That gave us enough fuel for the ﬁnal item on the agenda: a Segway tour, conducted by Segway of Arkansas. After a short training course, our group was off, gliding through the River Market District to Heifer International and the Clinton Center, then halfway across the Arkansas River on the Clinton Presidential Park Bridge, previously the Rock Island Railroad Bridge, now open to pedestrians and cyclists. From there we linked up with the Arkansas River Trail, which we followed up to the site of the original stone outcropping that gave Little Rock its name — La Petite Roche, as a French explorer termed it in the early-18th century. The Clinton Presidential Park Bridge, previously the Rock Island Railroad Bridge, spans the Arkansas River and is open to pedestrians and cyclists.

Our ﬁnal stop in Little Rock was also historical — not nearly so old, but tremendously signiﬁcant. On our way to the airport, we visited Little Rock Central High School, where in 1957, nine African-American students integrated the Arkansas public-school system, sparking riots, mob violence, and a standoff between the Arkansas National Guard and the U.S. Army. Today, Central High is a historic site operated by the National Park Service, and also a fully functioning, fully integrated high school. Change and progress are possible, even as they co-exist with the past, as we learned everywhere we went in Little Rock.