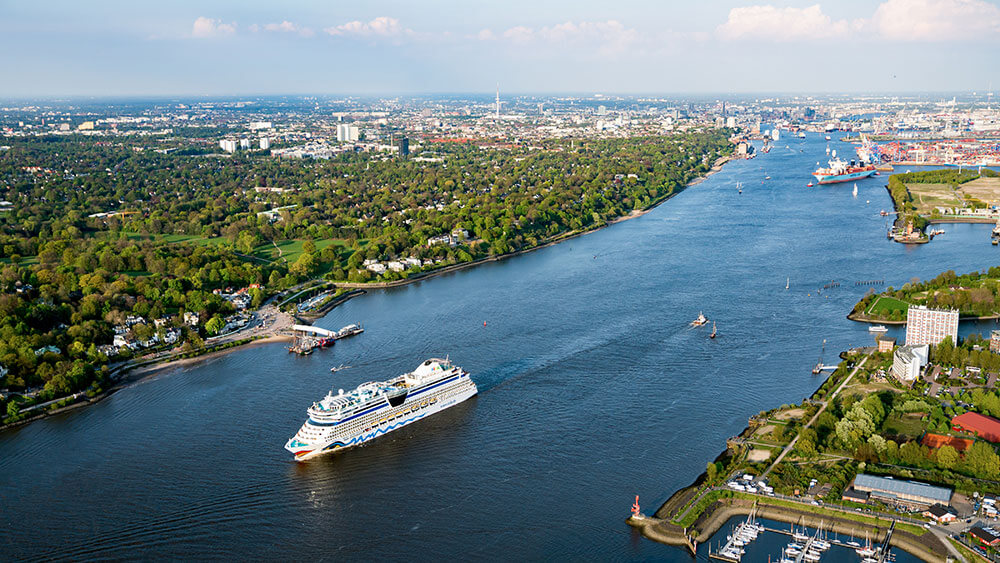 A cruise ship sails along the Elbe River. The first-ever luxury cruise ship set sail from Hamburg to New York City at the turn of the 20th century, nearly 120 years ago.(Andreas Vallbracht)

It can be said that Hamburg’s place in history started with a farewell wave. Germany’s second-most populous city’s reputation as a global port is rooted in the departure of the Prinzessin Victoria Luise, the first-ever luxury cruise ship, which set off for New York City in January 1901. More than a century after that vessel left its port, Hamburg continues to thrive, welcoming approximately 900,000 passengers in 2018.

But these days, travelers are finding it worth their while to drop their anchors and visit awhile. In mid-August, the German Convention Bureau and Hamburg Convention Bureau showed me—along with 11 meeting planners from North America — why, with an educational trip through Hamburg’s past, present, and promising future.

I flew into Hamburg, but my first taste of the city began, fittingly, near the water’s edge at the Elbphilharmonie. Located on the Elbe River and towering over the HafenCity district, the building — which features a concert hall, residential units, the Störtebeker brewery and restaurant (try all of the beers, seriously), and the 205-room Westin Hamburg — glimmers with 2,000-plus individually shaped window panels below a wave-like rooftop. The design has earned worldwide acclaim and inspired Architectural Review’s Charles Jencks to call it “a civic masterpiece … [that] will turn into Hamburg’s enduring pride.”

After a journey up Western Europe’s longest escalator — more than 250 feet — to soak in the 360-degree views from the wraparound terrace, our group discovered why the experience inside the building also is a source of pride. The 2,150-seat Grand Hall is lined with 10,000 fiber panels that are designed to reflect sound waves throughout every corner of the room. The paneling — which looks somewhat similar to an ocean reef — is called “white skin,” and the Romanian Youth Orchestra wrapped the audience in a layer of perfect reverberation.

The echoes of that performance were still humming in my head when we arrived at our first host hotel, the Grand Elysées, a five-star property with 30 conference rooms, more than 13,000 square feet of meeting space, and 511 luxurious rooms offering such a sense of tranquility that it could ease even the strongest case of jet lag — which, luckily, turned out to be my experience. 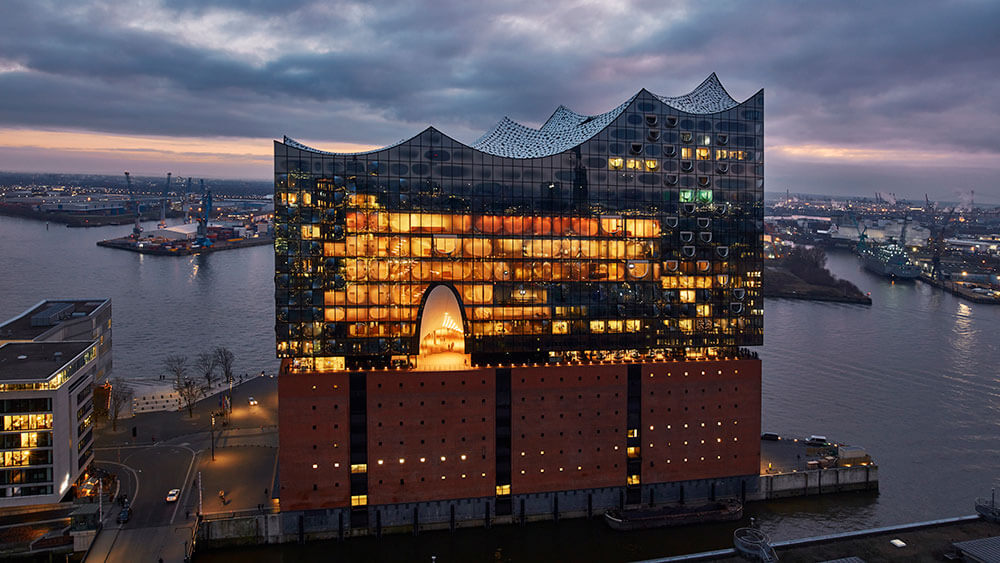 Chanterelles and Halibut, Old and New

I awoke the next morning after a sound sleep with a mission. We met Andreas Block, executive chef at the Fairmont Hotel Vier Jahreszeiten, at the Isemarkt, a bi-weekly farmers market underneath the city’s U3 subway line, for a morning grocery gathering expedition. After checking off the ingredient list — in-season items including chanterelle mushrooms and plums, along with halibut and herring — we enjoyed some behind-the-scenes culinary lessons at the 156-room property, built in 1897, and nestled on Inner Alster Lake. The hotel’s recent renovation gives it a sense of modern luxury while preserving its iconic historical architectural details.

RELATED: Hamburg From Market to Table — Every Step of the Way

Our food market and team-building exercise was a first for the kitchen, but it was easy to see how this activity — which culminated in a private dining room where we enjoyed the upscale lunch that we helped prepare using the ingredients we selected — would be an ideal fit for board meetings and other intimate groups looking to make their meal experience more meaningful. The members of our groups weren’t the only ones who were fans. “For us in the kitchen, we rarely get to interact with guests,” Block said. “So this is extra special to get to invite you in to the place that feels like our home and share the experience.” From Block’s “home,” we took a five-minute ride to the other side of the Alster to explore the Hotel Atlantic. The five-star property has eight meeting rooms, highlighted by the Grosser Festsaal’s lofty, 25-foot-high ceiling that transports guests to its early 20th-century opulence when it served as a hub for cruise ship passengers. The Atlantic — with freshly renovated rooms and a nearly completed overhaul of its iconic lobby bar and outdoor terrace — is set to begin a new chapter in 2021 when it joins Marriott’s Autograph Collection.

When we stepped out the property’s front door, we took a step back in time for dinner aboard the St. Georg — the oldest and only true steamboat on the Alster. We made our way through Hamburg’s network of canals, sharing the water with a crowd of rowers and sailing enthusiasts riding out the fading days of summer. “In a way, Hamburg has been a hidden gem for quite a long time,” said Nele Aumann, head of conventions at the Hamburg Convention Bureau, as she toasted the evening.

“Now, it’s ready to be revealed.” Those revelations continued to be made to us throughout the week — while enjoying a feast on the rooftop of our second host hotel, the 275-room Le Méridien whose 11,000 square feet of meeting space has been attracting organizers of automotive and pharmaceutical events; toasting a highball in the Reeperbahn, a street and entertainment district in the St. Pauli district, steps away from some of the bars where The Beatles cut their teeth; exploring the architecture of the warehouses in the Speicherstadt, a UNESCO World Heritage site; and sampling the Michelin-starred (two stars, actually) menu from the kitchen at the five-star Hotel Louis C. Jacob.

All those attractions have played a role in elevating Hamburg to the top of consideration lists for meetings and events business. In June, the city welcomed more than 24,000 attendees for the Rotary International Convention. That crowd seems like a preview of what’s to come.

In August 2020, the Congress Center of Hamburg (CCH) will open its doors for the first time since 2017 to show off a €230-million renovation that will make it the largest convention center in Germany. I stopped by the CCH, but since it’s an active construction site, I wasn’t able to take a hard-hat tour. Instead, I got an alternate version: a virtual reality roller coaster ride that whipped me through the center’s nearly 130,000 square feet of exhibition space, approximately 130,000 square feet of open foyer space, 12,000 seats spread across about 50 halls and rooms, and a sprawling open green space that overlooks a neighboring urban park.

I didn’t need any VR goggles to augment the views of Hamburg, which I drank in during my 20-minute taxi ride to the airport for my return to Chicago. No matter how attendees arrive in Hamburg in the future — cruise ship, airplane, self-driving car, or teleportation device — they will find many excellent reasons to stay. The nearby city of Lubeck, which prospered in the Middle Ages, is filled with stunning Gothic buildings. (David McMillin)

The Center of the 13th Century

In addition to an immersion in the sights, sounds, and flavors of Hamburg, our group took a one-hour shuttle northeast for an excursion in Lübeck.

Founded in 1143, the city served as the capital and Queen City of the Hanseatic League, a network of towns in Northern Europe that prospered throughout the Middle Ages. “Lübeck,” our guide toldus, was “the New York City of the 13th century” due to its ability to get “filthy rich” from mining and trading salt.

With a population of around 210,000 today, the city certainly feels more intimate than a 21st-century global financial center and no less captivating. We chartered boats for a journey along the Trave River. The skyline features seven distinct church towers, and the Gothic architecture of the city gates could easily have served as the backdrop for a “Game of Thrones” episode.

The ability to preserve the past earned Lübeck the honor of being updated a UNESCO World Heritage site, but two of the city’s meeting venues — the Music and Congress Center (MuK), which hosts more than 300 annual events in more than 12,000 square feet of meeting space, and the Media Docks Business & Conference Center, with space for up to 450 attendees — have ushered the city into the future of business events.