Technicians set up a room at the Wisconsin Center for live-streaming. Shifting their services and expertise to meet the demands of the hybrid-meeting boom is just one way DMOs are redefining their role.

There’s no question that 2020 has been crushing to the DMO. U.S. destinations have endured wiped-out funding as a result of nonexistent hotel occupancy, en-masse event cancellations, and double-digit layoffs — not to mention the added challenges of social unrest and for some, natural disasters. In so many ways, this year has brought the DMO to the brink. “It has been incredibly challenging. The city that never sleeps, just kind of went to sleep for a little bit,” said NYC & Company President and CEO Fred Dixon, in a phone interview in October. New York City was the epicenter of the COVID-19 outbreak in the U.S. and then became known as one of the safest in terms of public health. It has been a rollercoaster of a ride. At one point, in August, occupancy rates dropped 80 percent.

Throughout and after the crisis, NYC & Company dug deeper into its role as a disseminator of information, spelling out a deliberate path forward for the city in “ALL IN NYC: The Roadmap for Tourism’s Reimagining and Recovery” campaign, as well as launching resources like a citywide listing of virtual site tours for organizers and a monthly webinar series for the travel trade. “The best thing we can do as a DMO is be that consistent source of information and keep the conversation positive and the momentum [moving] forward. I think the DMO model is as important as it’s ever been … here in New York,” Dixon said. “And I’m sure that’s the same for other destinations across the country and around the world. Because information is key right now; content is king. And the DMO really finds itself at the center of those conversations in every way, especially in a moment when you have so many businesses that are challenged.” 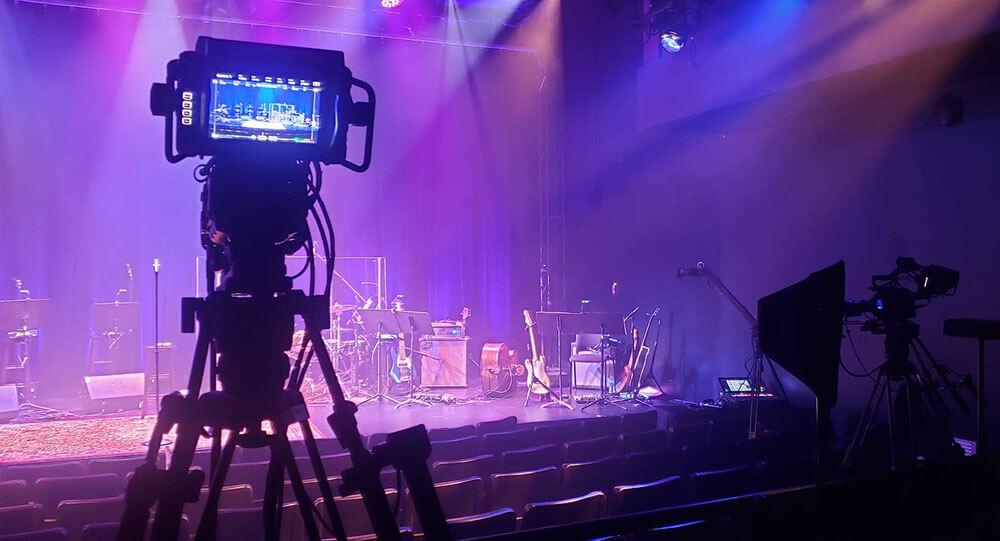 Shubert Virtual Studios in New York City is one of many venues with hybrid capabilities promoted by NYC & Company.

During the pandemic, Los Angeles Tourism & Convention Board’s 1,100-plus members “have really turned to us as being the central source for reliable information, and I think that’s one of the things that’s going to continue,” said Adam Burke, the bureau’s president and CEO, during the “‘After’ Tourism — What’s Next for Travel?” session at this fall’s WRLDCTY virtual event. Held Oct. 22, the panel of DMO executives discussed what destinations will look like in the decade ahead, and how that evolution may reshape the the role of the DMO.

In the short term, it’s clear that role for most will include acting as an information liaison. LA Tourism played an integral part in coming up with guidelines and protocols outlined by the county’s economic resiliency task force along with the county’s department of public health and county commissioner’s office. This period of intense collaboration between the DMO and local municipalities, Burke said during the panel, has been “a silver lining.” In VISIT Milwaukee’s case, organizers as well as supplier partners relied on them so heavily that the bureau began hosting weekly webinars to cover frequently asked questions. This weekly connection with local partners and stakeholders also led to new ideas — including new packages to entice visitors and staycation-ers, and a new meetings campaign called, “Bring it Home.” “It’s targeting our local decision makers to empower them to do their civic duty and keep their meetings here in Milwaukee,” said Leslie Johnson, vice president of sales for VISIT Milwaukee.

Johnson started her role in January 2020 — right as Milwaukee was set to kick off a banner year of events, including the Democratic National Convention, the Ryder Cup, USA Triathlon, and International Moose Convention. “It was something Milwaukee had never seen before,” she said. Now, “the sales side of it has changed so much; we just became even more and more of an advocate and partner for our clients and our hotels to try to bridge that gap in communication. [Because] there are just as many moving pieces when you’re trying to move or cancel the business as there are when you book it.” “With things changing so quickly, everybody has questions. How do we understand this language? What did these new regulations mean? How does it impact me?” said Leslie Johnson, vice president of sales for VISIT Milwaukee, on how her DMO became a go-to resource for the local hospitality community during the pandemic.

In the spring, the Monterey County CVB had to make difficult decision of laying off 80 percent of its staff. Short-term group business dried up — however, that didn’t mean conversations completely stopped. “We never lost sight of the fact that the business is still happening,” said Rob O’Keefe, president and CEO at Monterey County CVB. “There wasn’t an on-off switch for planners, where it just disappeared. Meetings are being discussed, leads are being sent, business is being booked — just at a greatly diminished rate compared to before.” In late October, the bureau was able to hire a new vice president of business development, Teresa Savage, formerly vice president of sales for Visit Napa Valley. “There’s been sort of an immediate transformation in terms of the services that we provide to planners,” O’Keefe said. Often, they’ve had to step in and assist organizers when suppliers, lacking staff, could not. Johnson at VISIT Milwaukee said that her team also fielded many requests from organizers as hotels struggled with downsized sales teams. “We’ve seen planners who, in the past, may not have used the CVB for anything, or maybe undervalued a CVB’s services, come around and find that, ‘Wow, we’ve got a one-stop shop for everything I need,’” O’Keefe said.

During the WRLDCTY panel, DMO leaders pondered the ways they can help organizers address the challenges of meeting in our new reality. “I think part of the changed responsibilities of DMOs is working with event organizers to find new concepts of operation,” said Keith Tan, CEO, Singapore Tourism Board. He pointed out that rapid testing for larger events, like the Singapore Grand Prix, “even a turnaround time of 15, 20 minutes doesn’t work,” referring to the event’s 268,000 spectators. “So how do we then create an experience that still makes sense for visitors coming in? We’ve had to think out-of-the-box in every way for this.” In anticipation of more hybrid meetings, some DMOs are working with partners to upgrade their infrastructure. “We’re looking at incorporating tech and the notion of hybrid meetings as being a permanent fixture for the future accordingly,” said O’Keefe, adding that the Monterey Conference Center is considering installing a new level of technology that would support those kinds of meetings with a “super Zoom capability,” he said. “There’s innovation and then there’s forced innovation when you don’t have a choice. And I think we’re in that era.”

The expected onslaught of groups converting to hybrid formats has opened up new possibilities for destinations like Monterey County, he said. Groups that had been too large for the destination will now be within their reach. For example, a group with 2,000 peak room nights normally would be a stretch — but if half of those attendees tuned in virtually, that makes hosting that group feasible. “We are going to position ourselves to be able to do hybrid … and now put larger pieces of business on our radar,” O’Keefe said. “It’s being opportunistic with the natural trends that are taking place.”

For some DMOs, this impending hybrid boom means a shift in the kinds of staff and services they offer to organizers. Johnson said that VISIT Milwaukee has been redirecting some members of its event experience team to become virtual/hybrid event experts, telling them “You guys need to dig in, figure out [what] resources we have in the community, who are the right partners, so we already have all of that dialed in for [organizers].” And since they recently navigated that very challenge during the DNC, they’re already several steps ahead. “It was one of the first major virtual [events] to take place,” Johnson said. “We were able to learn a lot right away and put a lot of that in place.” In California, Long Beach is jumping headfirst into hybrid. In October, the Long Beach CVB along with the Long Beach Convention & Entertainment Center (LBCEC) introduced a new program, called Long Beach Live, that sells itself as a “turnkey solution to blended in-person and virtual conventions, conferences, meetings, and events.” To boot, the CVB has created a new position solely dedicated to helping groups navigate this new medium — a director of creative initiatives. “We believe that there’s no turning the clock back,” said Steve Goodling, president and CEO of the Long Beach Convention & Visitors Bureau. “COVID forced all of us to accelerate our acceptance of digital technology and, therefore, broadcast technology. And what really is clear is people want to broadcast, but they want it to be interactive.”

Goodling says he sees the LBCEC campus as one big studio that offers a unique solution for large hybrid programs, where they can offer a level of production and creativity on par with the TV and film studios that the destination has long been known for. This high-quality, immersive experience is important, he said, to ensure the virtual attendee doesn’t feel like a passive observer. “You have to feel that your questions will be heard,” Goodling said. “They have to think of you as an involved remote viewer.” The Netherlands’ Maeslant Barrier has the largest moveable parts of any flood barrier in the world. “This functional inventiveness and innovation is still very visible and apparent in our DNA today,” said Jos Vranken, managing director at NBTC Holland Marketing.

Stewards of Their Destination

Right now, some DMOs are also putting increased emphasis and effort into their roles as guardians of their destination. Many have reduced or cut membership fees, or are creating new programs to give local, especially small, businesses more visibility and support. VISIT Milwaukee has made a point to demonstrate their value to their members, offering them payment plans if necessary. “While our organization has made some cuts because of reduced hotel occupancy, we know that the partnership business is struggling too,” Johnson said. Burke said that LA Tourism waived membership dues for 2020 because “probably 60 percent of our membership are small businesses,” and adjusted programming to include take-out and delivery options, scratching participation fees for those restaurants as well. “I do worry about how many of those small businesses are going to have to shut down because of the pandemic,” he added.

“You see CVBs and DMOs transforming from marketing and sales entities towards stewardship and guardianship and destination management. Therefore, the governing and funding model should transform in order to allow [them] to play that role — and that’s an interesting development,” said Jos Vranken, managing director at NBTC Holland Marketing.

“This is the area that keeps me up at night,” said Scott Beck, president & CEO of Destination Toronto, during the WRLDCTY panel, when the conversation shifted to fear around small businesses dying as a result of the pandemic. “Some businesses might close, but where my optimism comes into play is that they’re going to come back. That’s what travelers demand. It is so important to the destination experience.” Beck continued on to say that it’s part of a DMO’s responsibility to advocate on their behalf for small business loans, tax relief, and other types of support. “We should be using every arrow in our quiver to make that recovery happen.”