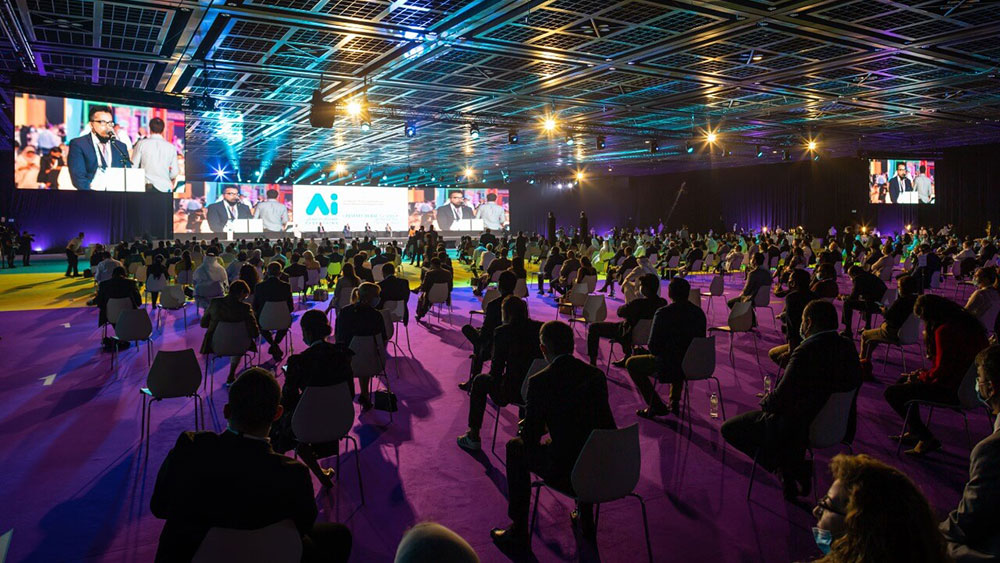 Socially distanced attendees listen during a session at the AI Everything conference in July at the Dubai World Trade Centre. The region’s first in-person business event since March showcased the effect of artificial intelligence on the UAE’s recovery and included temperature screening and contactless transactions.

The pandemic has made this year seem interminable — days, weeks, and months blur together. But the period between the last COVID-19 Recovery Dashboard, conducted Oct. 19-22, and the survey we sent out Nov. 16-19, has been punctuated by a few major events. In the U.S., the election took place and we (seem) to have a new President and administration come January. And as we were sending out the invitation to participate, the world had just gotten word of the second highly effective vaccine: Moderna announced a week after Pfizer that its vaccine has proven to be around 95-percent effective in trials, similar to Pfizer’s results.

At the same time, coronavirus cases have been spiking throughout the U.S. and in pockets around the world. Experts warn that we need to hunker down for a long winter and keep social contact to a minimum.

On the one hand, we have reason for optimism. On the other, we are resigned to the fact that there is more sickness, death, and heartbreak in store before we come out the other side of this crisis. Which seemed to follow the way 570 participants — 363 planners and 207 suppliers —responded to our survey this month: In some ways they were more and in other ways they were less hopeful.

In October we asked respondents to share how they were feeling in general, and for planners, this question elicited more hopeful responses than last time — 43 percent reported feeling hopeful compared to 33 percent in the last survey. Around the same percentage of suppliers (38 percent) checked off “hopeful” as in the last survey, but 6 percent more this time said they were doing their best to get by (42 percent vs. 36 percent last month).

With our new question this month — In the wake of the U.S. election, has your business outlook changed? — we wanted to see if this current event has changed our industry’s sentiment about a recovery. Around half of both planners and suppliers said they were more optimistic following the election, and a higher percentage of suppliers than planners reported feeling less optimistic: 20 percent vs. 14 percent. For 34 percent of planners and 29 percent of suppliers, the election results had no impact on their outlook.

Here are some differences that stood out to us when comparing the results from this month to last month.

Shifting emphasis on reskilling — A higher percentage of planners are focusing their reskilling efforts on designing live experiences in post-COVID-19 physical environments this time around: 66 percent vs. 57 percent last month, suggesting that planners are preparing for hybrid as well as digital events. And six percent more suppliers this month said they are developing new business models (46 percent vs. 40 percent last month), as the pandemic wears on and our traditional ways of doing business continue to be unfeasible for the near future.

Greater satisfaction with tech solutions — A higher percentage of planners this month reported feeling satisfied with their tech solutions for the digital events: 58 percent vs. 46 percent. Those who were unsatisfied expressed the desire to find a platform that served as an all-in-one solution and offered features that improved virtual trade-show and networking experiences.

Not all that worth it — When we asked if the face-to-face events that respondents had recently attended had been worth all of the precautions and safety measures necessary, suppliers were less enthusiastic this time around: 72 percent said yes vs. 82 percent last month, and slightly more said they didn’t see it as a viable option for most groups (23 percent vs. 18 percent last month). Their in-person experience convinced 34 percent of planners that it wouldn’t work for groups compared to 30 percent last month.

A greater unwillingness to travel themselves for business — Perhaps in response to spikes in coronavirus cases over the past month, both planners and suppliers seem less inclined in this survey to travel at all to a business event until there is a widely distributed vaccine. Thirty-nine percent vs. 33 percent of planners last month said they would not travel and 27 percent vs. 18 percent of suppliers last month said the same.

Seeking support — This month, a smaller percentage of both planners and suppliers reported joining online community groups to help navigate the crisis, and those who joined a group did so for different reasons. The vast majority — nearly 90 percent — of both planners and suppliers continue to seek out community groups for idea-sharing, but the objective for 35 percent of planners (vs. 24 percent last month) is reskilling, whereas 20 percent of suppliers — vs. 12 percent last month — said they are job seeking.

This supplier respondent had a suggestion for his peers: “Anyone with audiovisual production skills, get ready to see a huge, sudden spike in demand for your skills to help corporations make the transition to hybrid meetings.”

Please download a PDF of the full November Recovery Dashboard results by clicking the link below.