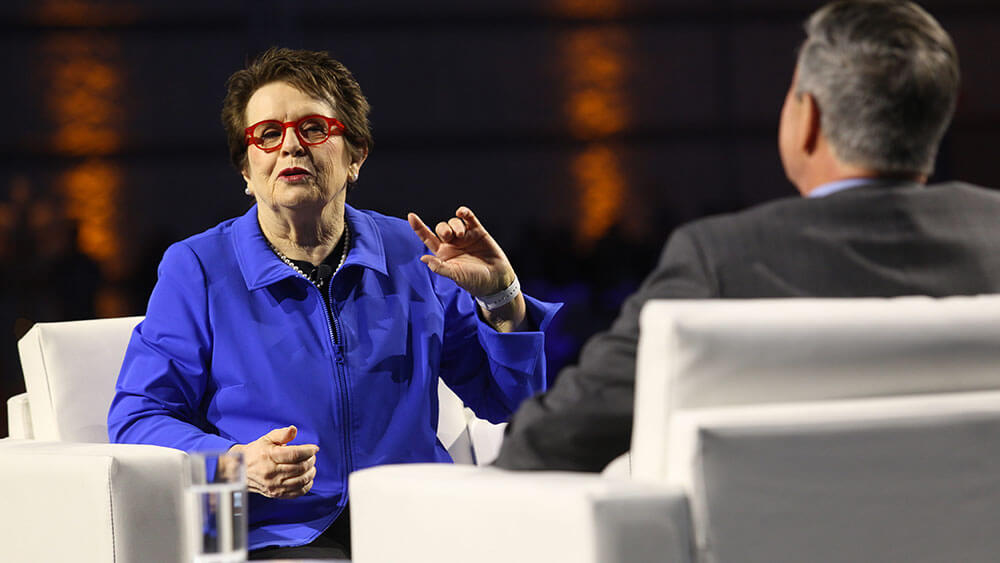 Even if you were not familiar with Billie Jean King’s monumental tennis career until she took the stage Jan. 8 for PCMA Convening Leaders’ Main Stage event, you are probably now a fan. And not just for her athletic achievements.

The fiery 75-year-old spoke candidly about her famous 1973 “Battle of the Sexes” tennis match, and her years advocating for social justice and equality, including forming the Women’s Tennis Association and her nonprofit organization dedicated to creating diverse, inclusive leadership in the workplace.

Even as a child, when she was first introduced to tennis, she realized “everyone wore all white and were white,” she said. “Where’s everybody else? So, I promised myself for the rest of my life I’d fight for equal rights for everyone.” A childhood friend, Susan Williams, introduced her to the sport.

“Susan asked if I wanted to play, and I said, ‘What’s tennis?’” King said. “She said you get to run and jump and hit a ball, and I said, ‘Those are my three favorite things!’” The second time she picked up a racquet, she said, “I knew I’d be number one in the world.”

Her biggest opportunity to make a difference in gender equality came when she defeated Bobby Riggs in the “Battle of the Sexes” match. By then, King had won 33 of her eventual 39 Grand Slam titles and already was a potent symbol of the women’s rights movement. But with roughly 90 million people tuning in to the match, King understood how much was hanging in the balance: Title IX had been passed just the year before, the women’s rights movement was just getting started, and women’s professional tennis was only in its third year.

“I had to win this match,” King said. “I told Bobby that it’s not about the money. It’s about history. It’s about change.”

Off the court, King relentlessly has pursued her quest to change the world.

In 2014, she founded the Billie Jean King Leadership Initiative, a nonprofit dedicated to promoting inclusion and diversity in the workplace. For society to become truly equal, everyone must be their authentic selves and support and teach each other, she said.

“Every single person here is an influencer,” King said. “When you wake up and have a fire in your belly, you can make a difference and change the world.”