On a recent media trip hosted by VISIT JAPAN Travel & MICE (VJTM) and Japan National Tourism Association (JNTO), I traveled to Osaka for the jointly held VJTM 2019 and Tourism EXPO Japan (TEJ) 2019, held at INTEX Osaka from Oct. 23–26. On the heels of the events, JNTO hosted our group of travel writers on a fam to Hokkaido.

Approximately 800 industry buyers and sellers gathered for the annual VJTM four-day conference that promotes both inbound travel to Japan. For the first time in VJTM’s six-year history, the event was held outside of Tokyo, in the port city of Osaka, Japan’s third-largest city, on the island of Honshu. TEJ, a global tourism event, attracted more than 150,000 visitors. 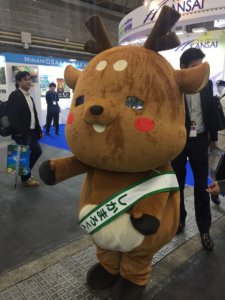 As I joined my fellow fam-trip participants at TEJ, the first thing I noticed was how many larger-than-life mascots — representing every kind of organization, from banks personified by cuddly bears with red cheeks, to stylish, humanoid cats representing cities — were wandering the trade-show floor.

After choosing from a variety of options — ramen bowls? curry? dumplings? — at the expo’s food court using my daily voucher, I maneuvered around the lovable mascots to explore the booths, each one more creative than the next. A booth promoting tourism to Hong Kong played up the glittering metropolis with bright, neon signage, while Thailand’s booth included performers hand-painting flowers and playing instruments while dressed in traditional Thai clothing. I tried wine from Georgia (the country, not the state), and played basketball, albeit poorly, at a booth promoting Maishima, a man-made island in Osaka Bay known for its sports tourism.

As media, we spent several mornings having one-on-one meetings with domestic VJTM sellers, where I learned about places including Taiki, a town in the Mie Prefecture’s countryside, which is now attracting new tourism through programs like “mountain yoga” and “sea yoga,” by taking advantage of the wellness trend along with the town’s natural surroundings. At the end of the day, we took a shuttle back to the five-star Hotel New Otani, just 20 minutes away from INTEX Osaka. My view from the 17th floor was breathtaking, but better yet was the sky lounge on the 18th, where a welcome reception from the hotel was held.There, I had tranquil views of Osaka Castle and its surrounding park — the perfect antidote to a long, bustling day.

We spent our final night in Osaka taking a trip to the Kansai Region. I visited the ancient town of Nara, which is less than an hour away from Osaka via bus. We made sumi ink sticks by hand at Kinkoen, one of the very few traditional ink makers left in Japan. For dinner, we enjoyed Hirasou Nara’s specialty, kakinoha (persimmon leaf-wrapped) sushi, while seated on tatami mats.

Mascots made an appearance again — our tour guide Tomo had three of them at the end of the pointer with which he led our group. One was a Japanese-style lantern; another was Western-style — a grinning, orange jack-o’-lantern. Having them both created a bridge between two cultures, he explained. The third was a brown deer with antlers — Nara’s official mascot. Mascots, or yuru-chara, I learned, are a popular tradition in Japan, often used to promote a place — so it was no wonder they kept popping up in my travels.

Following our time in Osaka, we took a two-hour flight to Hokkaido, the northernmost of Japan’s main islands, known for its volcanoes, natural hot springs (onsen), and ski areas, and a popular destination for extending business trips. I didn’t know what to expect, but I was hoping Hokkaido would live up to what I had seen of it on Instagram — Mount Yōtei blanketed in snow, the rainbow meadows of Furano in fall, and the Otanu canal at night, dotted by blue lights.

After landing at New Chitose Airport, our group took a shuttle to Northern Horse Park. Our tour was led by Yasushi from Tour Guide Tokyo, which provides licensed, English-speaking tours in Tokyo and the surrounding areas. After a pork entree and a whipped dessert concoction at the park’s BBQ Restaurant, we were set loose to explore on our own. Northern Horse Park has 12 zones, including two restaurants, a kids’ park, and the Palazzo Vega, which includes a horse museum and activities like cycling and archery, but I took off for the stable.

While I was getting acquainted with my new Palomino friend Gold Rush, I heard a drumroll in the distance and watched a parade — including a procession of costumed ponies, horses, and dogs — wind through the park in celebration of its 30th anniversary. I tagged behind back to the entrance, where my group was already waiting.

Next up was Upopoy National Ainu Museum and Park, close to Lake Poroto, which is set to open in April 2020. This past February, for the first time in history, the Japanese government officially recognized the Ainu people of Hokkaido as an indigenous people of Japan. The National Ainu Museum has been established to celebrate and preserve Ainu culture, and will include archival material such as oral literature, animations, and more.

Miyuki Muraki, an Ainu descendent who greeted us upon arrival, stressed how “very important” it is for her people to have a national museum, “because that means the country of Japan admits we have different ways,” Muraki told us, as we stood at the entrance of the sprawling, modern structure. “It’s important for the Japanese government to recognize the native people.” Before we left, Muraki gave us a taste of Ainu culture with a lovely performance on the mukkuri, a reed instrument similar to a jaw harp.

Later, we had dinner at SOMOZA, a restaurant farmhouse in Hokkaido’s Niseko region, known for Alpine skiing. SOMOZA includes a chef’s table, gallery, and can also function as an exhibition and event space, overlooking the countryside with floor-to-ceiling windows. When we arrived, the chef’s table was already loaded with a variety of small plates, from sushi and salad to cheese and freshly baked bread. After a Champagne toast to our arrival with delegates from the government of Hokkaido, we ate in the adjoining room, where traditional arts and crafts were on display and available for purchase.

Post-dinner, I made my way up to the top floor of SOMOZA, which can be used as a space for creative workshops. I felt a bit unbalanced, not only because the attic gave way to a precipitous drop below, but also because between the traditional tatami mats, the elegant, exposed beams, and the Buddhist statue, I felt as though I had stepped into another world entirely.

We were staying that night at the Hilton Niseko Village. As soon as I arrived back at my room, I drew the curtains, taking in the night view of Niseko and Mount Yōtei in the distance.

The next morning, at Niseko Takahashi Farm, I threw dietary guidelines to the wind and got a farm-fresh vanilla ice-cream cone. The area surrounding the farm included sweeping mountain views and plenty of small artisan shops and cafes, which we had time to peruse on our own before my ice cream melted and we headed back to the bus.

Our next stop was Park Hyatt Niseko Hanazono. The brand-new hotel — not open to the public until Jan. 20 — held the recent G20 Tourism Minister’s Meeting that took place only a couple of days prior to our visit. At the meeting, held Oct. 25–26, 200 people from more than 31 countries and international organizations gathered to discuss trends in tourism policy, including sustainable tourism, and how technology and tourism intersect.

Our Hyatt hosts explained that Niseko is famous for its “powder” snow — drawing more international skiers from as far away as the U.S. and Australia each year. The off-season warmer months are more popular for nationals celebrating weddings, as well as for business events.

We made our way via shuttle to NIKI Hills Village. The restaurant was set on the secluded hills of Asahidai, overlooking Yoichi Bay and the vineyards. The panoramic view was breathtaking, and a few of us made sure to take a few pictures before heading inside for lunch. The three-course meal included white wine from the vineyard, along with a light salad, duck entree, and ice cream shaped like soba noodles. Between the views and the meal, I was thoroughly sated.

Our next stop was Tanaka Brewery, established in 1899, and specializing in local sake. Following a 15-minute tour of the sake brewing process — from rice milling to bottling — overlooking the factory floor, we returned to the store to enjoy tastings, from sweet and effervescent to clean and smooth. As part of the free tour, visitors are allowed to try up to 10 varieties of sake, but after the glass of wine at lunch, two was my limit.

We had dinner at Uomasa, a sushi restaurant and izakaya (Japanese-style gastropub) popular with locals, enjoying a 15-piece set of sushi in a traditional tatami room. The sushi was fresh and locally sourced — Uomasa prides itself on working with local farmers and fishers.

Dinner was followed by a visit to Grand Park Otaru, a four-star waterfront hotel with views of Yacht Harbour. The hotel is conveniently adjacent to Wing Bay Otaru, one of the biggest shopping malls in Hokkaido, with an arcade and movie theatre. Despite the mall’s convenient location, once again a lingering case of jetlag prevented me from exploring. I fell asleep with my curtains open to the harbor. Historic boats on the Okanu Canal. (Photo by Jasmine Zhu)

Our morning started off with sightseeing on the Otaru Canal. Our guides from Otaru Canal Cruise took us on a leisurely, 40-minute boat cruise around historical buildings and Instagram-worthy spots like the South Canal, where old warehouses were covered by crimson fall foliage.

When we docked, we had around an hour of free time to explore Otaru on our own. I set off for the famous Otaru Music Box Museum, and then met up with our group for a chicken lunch at Wakadori-Jidai Naruto Honten. We then took a 45-minute drive to Sapporo to visit Ōkurayama Ski Jump Stadium, site of the 1972 Winter Olympics — the first time the Winter Games were held in Asia.

As we took a lift up to the Mt. Okura Observation Platform — well over 400 feet up the slope — I watched the Winter Sports Museum get smaller and smaller. For the less adventurous and indoorsy types, there’s a VR simulation of the ski jump inside the Winter Sports Museum, along with historical exhibits and other hands-on activities. Back on solid ground, we visited Hokkaido University, known for its rows of gingko trees, then at the peak of their brilliant gold foliage. Partly because it was the last day of the fam, and partly because I couldn’t get enough of them, I took so many pictures of those trees that I ran out of space on my phone.

As we unwound on the tatami mats and enjoyed our last dinner together at Koropokkuru, where we had izakaya staples and highballs, our eclectic group of Italian, Korean, Russian, and American writers bonded for the last time. After having spent the past several days exploring and occasionally getting lost in and around Osaka and Hokkaido, we had grown close. And in spite of having seen so much, I felt like we had barely scratched the surface.

There was one question that I continually heard everyone asking each other that night: “When are you coming back?”