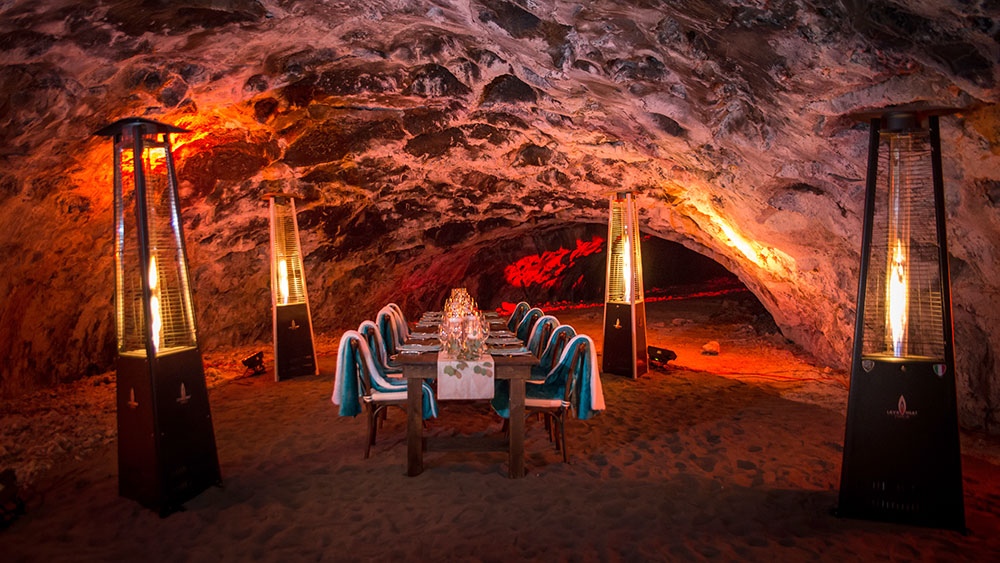 It’s not unusual for older buildings to be revamped and reimagined for use as special-event venues, but Pronghorn Resort in Bend, Oregon, has taken the practice to the extreme. The 640-acre resort now offers groups the chance to dine in ancient caves.

The caves, called lava tubes, were created by hot lava that flows under the surface lava, which hardens as it cools. Deschutes County in Central Oregon, where the resort is located, is home to between 500 and 1,000 lava tubes created several thousands of years ago when Oregon’s volcanoes were most active. Most of the state’s lava tubes are not open to the public except for guided tours, making the Pronghorn tube a special experience for groups meeting on the property. All dining supplies — including the settings and even the kitchen itself — are hauled to the lava tube for the dinner event.

The Pronghorn team has done dinners for up to 20 people in the lava tube, which is located on the Tom Fazio Championship Course, one of the resort’s two 18-hole golf courses. Because the cave isn’t near the main kitchens, all supplies and a portable kitchen are brought to the cave. Temperatures in the cave remain at around 50 degrees year-round, a spokesperson told Convene, so heat lamps are arranged in the subterranean dining room.

Guests enter a tunnel to get to the dining part of the cave. But don’t worry, there is no spelunking involved. The spokesperson said both tunnel and cave are tall and roomy so guests won’t be bending down or crawling.

The resort, located 15 miles north of downtown Bend, offers groups both indoor and outdoor meeting spaces — including the 7,000-square-foot Event Island and a new, 2,446-square-foot ballroom — and customized on- and off-site adventures for groups of up to 500.

The lava-tube dinners, however, are truly one-of-a-kind. They include locally sourced farm-to-table ingredients, customized menus created by Executive Chef Kevin Linde, and artisan-crafted cocktails featuring local spirits and juniper — inspired by the juniper-filled Deschutes National Forest that surrounds the property.

Event participants who dine in the lava tube and who stay in the newly opened, 104-room Huntington Lodge at Pronghorn Resort get additional volcano-related bragging rights: They will have eaten in and slept on top of another lava tube. According to the Pronghorn website, construction on the building was delayed because a roughly 2.5-acre cave was found beneath the site, requiring special construction provisions.

Perhaps it won’t be long before Pronghorn will be serving large banquets underground, too. Because the lava tube temperature remains a consistent 50 degrees all year round, standing heaters are used to keep the cave comfortable.