On May 16, I attended TWA Hotel’s first event, held just one day after its grand opening. Fittingly, the event was airline-related — JetBlue For Good, an annual dinner recognizing JetBlue crew members who have completed 150-plus hours of volunteer service during the past year. TWA Hotel hosted 400 attendees, who flew in from all across the U.S., the Caribbean, and Latin America.

There had been a buzz about the former TWA Flight Center at JFK airport that closed in 2001 and just reopened as the TWA Hotel, and I thought I had a pretty good idea of what to expect — a nice throwback to its roots as an iconic terminal built in 1962.

But the TWA Hotel, JFK’s first on-airport hotel, didn’t just pay homage to the ’60s — it felt like I had entered an actual time warp. With songs by The Beach Boys and Elvis Presley as the musical backdrop, I meandered from the hotel’s Sunken Lounge over to the mezzanine level above to check out the Paris Café by Jean-Georges before the event officially started. The hotel, which offers 50,000 square feet of event space, was very “Mad Men,” from an original split-flap departures board by Solari di Udine, to the midcentury modern features I saw everywhere, like egg-shaped lounge chairs and the building’s original shade of chili pepper red carpet. I did spot more than a few anachronistic blips — all seating at the chef’s table in the Paris Café includes discreet USB plugs, and some travelers were quietly working on their laptops near charging stations. Even so, I probably wouldn’t have blinked twice if I overheard someone talking about a Beatles concert that they were going to later.

When it came time for the event itself, I got a little lost. I went too far down one of the building’s wings and ended up taking the elevator down one floor. I got out and saw that I’d somehow ended up in Terminal 5 of JFK — the airport’s JetBlue Terminal that also serves as the airline’s main base — near baggage claim. The whole misadventure took less than a minute, and made me realize how convenient it must have been for the event’s attendees to make their way up, directly from their flights.

I hooked a left once I was back inside the 512-room hotel, and found my destination: the 7,000-square-foot prefunction area connected to the Starstream Ballroom.

Once again, I experienced a fab ’60s time warp, surrounded by attendees in snazzy white dinner jackets, colorful fringe dresses, and fantastic bauble earrings. I ended up sitting and chatting with one the attendees being recognized, Matilia Lopez, a JetBlue crew member who had fulfilled more than 300 hours of community service last year alone. Between bites of puff pastry during the cocktail-style reception, I learned that she’d flown in from Orlando, and it was her third year in a row of being invited to the JetBlue For Good annual dinner. Like the other crew members in attendance, she was staying overnight at the hotel. Matilia told me that she planned to keep her volunteer streak going in the foreseeable future, and that her favorite aspect of JetBlue’s volunteering program was the ability for her to work locally with organizations and missions she felt passionate about, including youth organizations and soup kitchens.

The seated dinner was held in the 15,000-square-foot Starstream Ballroom, whose ceilings soar 21 feet high. Along with other travel writers invited as guests, I learned about JetBlue For Good’s history, founded in 2005, which focuses 80 percent of the company’s giving resources on youth and

Bringing New York’s Hometown Airline back to the five boroughs for the JetBlue For Good event, after eight years in alternate destinations, speaks to the draw of this amazing, architecturally stunning venue complete with 50,000 square feet of meeting space and all the retro glamour a delegate could imagine.”

education, community, and the environment. This was the first time in the program’s history that its annual dinner was held in New York City. The attendees at this year’s event represent 1 percent of JetBlue’s crew, but had logged 67 percent of its total company volunteer hours.

Over roasted asparagus and steak, I watched as several award winners took the stage. Awardees earned honors in categories including Airports Volunteer of the Year, Customer Support Volunteer of the Year, and Support Center Volunteers of the Year. Among the crew members honored was Anthony Thomas (Technical Operations Winner, JFK), who spent Thanksgiving Day volunteering at Newark Penn Station feeding the homeless. Another winner, Kimberly McCommon, (Pilot Volunteer of the Year, JFK) volunteers with the JetBlue Foundation and with the Organization of Black Aerospace Professionals to introduce young people and students of color to careers in the cockpit.

I would have liked to have both saved some room for dessert and lingered in the ’60s at TWA Hotel a bit longer. There was so much still left to explore, like “Connie,” a newly renovated 1958 Lockheed Constellation airplane just outside the Sunken Lounge, which has been repurposed into a cocktail lounge, and the Reading Room, a combination bookstore and library featuring all Herman Miller furniture. But the next time I have a layover at JFK, I’ll know exactly where I’ll be heading.

Related: JetBlue for Good: Why This Airline Cares So Damn Much 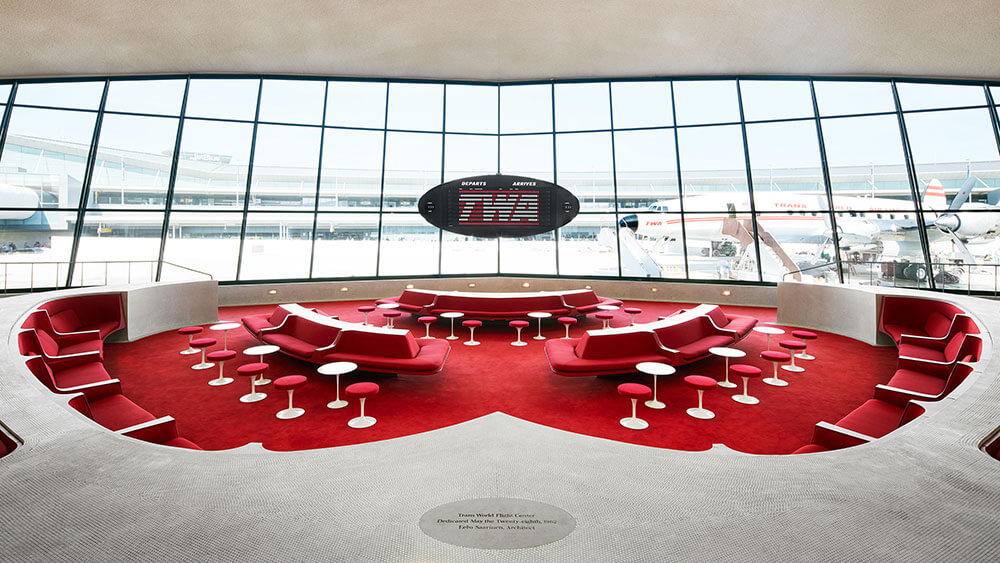 The Sunken Lounge at the TWA Hotel boasts a split-flap departures board by Solari di Udine — and a view of the hotel’s restored 1958 Lockheed Constellation airplane named Connie. (David Mitchell/TWA Hotel) The 1962 Room at the TWA Hotel has 4,200 square feet of meeting space and 15-foot ceilings. (David Mitchell/TWA Hotel) The signature Vulcain clock ticks on above the Eero Saarinen’s soaring terminal, which serves as the heart of the TWA Hotel. (David Mitchell/TWA Hotel) During the May 15 grand opening of the TWA Hotel, a performance of Beatles’ hits on the Flight Bridge got the crowd on its feet. (TWA Hotel) A collection of vintage TWA crew uniforms — including those designed by Valentino, Stan Herman and Ralph Lauren — are on display at the TWA Hotel. (David Mitchell/TWA Hotel)