Philip Jarvis, a software engineer on Microsoft’s HoloLens team, uses one of the devices on the job. Jarvis, who has Asperger’s Syndrome, came to Microsoft as part of the Neurodiversity Hiring Program. Read Jarvis’s story on the Microsoft blog. (Courtesy Microsoft)

In 2015, Microsoft announced a pilot program to hire people with autism. At the time, the technology giant’s reasoning for the launch was simple: “Microsoft is stronger when we expand opportunity and we have a diverse workforce that represents our customers,” Mary Ellen Smith, corporate vice president of Microsoft Business Operations, wrote on Microsoft’s blog in 2015. “People with autism bring strengths that we need at Microsoft, each individual is different, some have amazing ability to retain information, think at a level of detail and depth, or excel in math or code. It’s a talent pool that we want to continue to bring to Microsoft!” 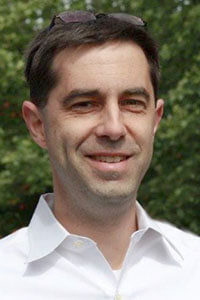 In the last six years, that program has grown to become its Neurodiversity Hiring Program and taken off — more than 150 neurodiverse individuals have been hired across Microsoft as full-time employees. At the same time, neurotypical team members have been trained to become more inclusive and think differently.

“In the last year, we have trained over 1,000 managers and employees on neurodiversity in the workplace,” said Neil Barnett, director of inclusive hiring and accessibility at Microsoft.

Barnett shared with Convene that the Neurodiversity Hiring Program has had a “tremendous impact” on the organization’s culture. “Managers who have hired talent from this program have shared feedback from employees that the culture feels more inclusive,” Barnett said. For example, he said, “managers are sending out meeting recap notes, providing feedback more often, and asking individuals [about their] communication preferences, which is being appreciated by everyone. We’ve also seen an uptick in employees and managers who were not originally part of the inclusive hiring programs reach out asking for team trainings to learn how they can be more inclusive.”

RELATED: Neurodiversity in the Workplace — and at Events

Including more diverse talent within Microsoft has also led to some major company breakthroughs, Barnett said, including innovations such as Eye Control in Windows 10, Seeing AI, Learning Tools for OneNote, and Xbox Adaptive Controllers.

“Our employees with disabilities bring unique perspectives and knowledge that has transformed our workplace and brought new ideas to life,” Barnett said. In addition, he said, they have made “contributions to the accessibility of our buildings, facilities, and transportation services.”