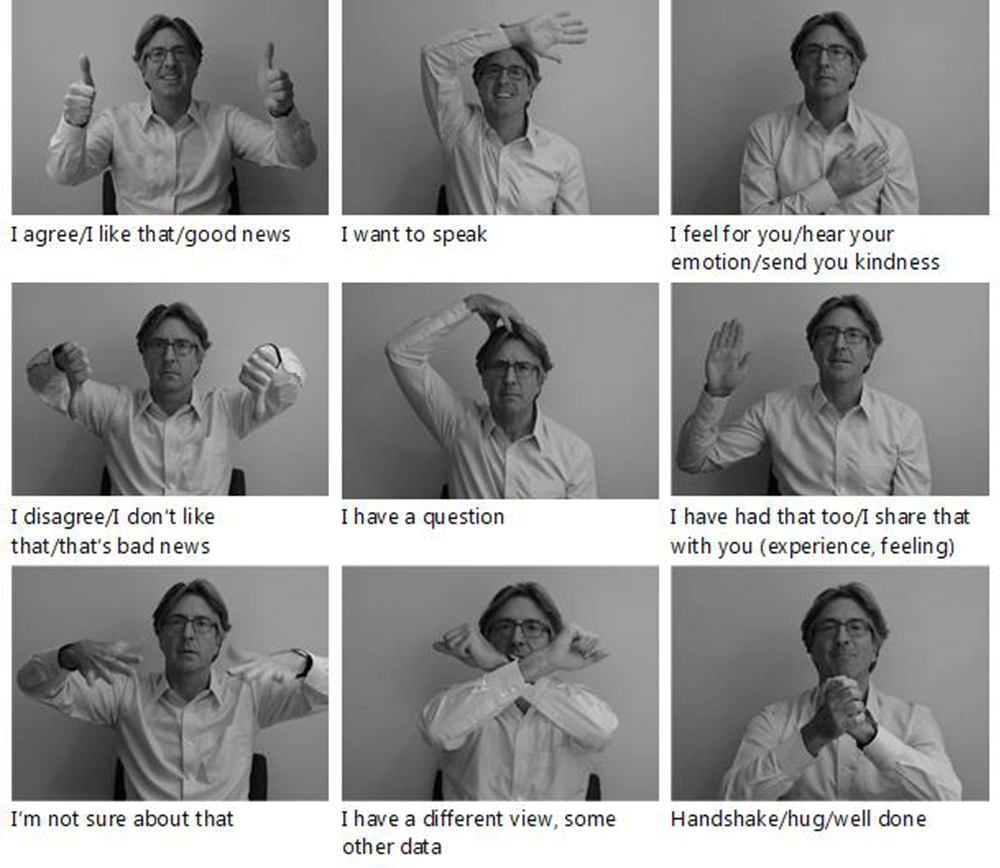 Paul D. Hills of University College London and one of the authors of a study on “video meeting signals,” demonstrates the nine hand gestures study participants learned to use while meeting online. (Creative Commons)

When researchers at the University of Exeter and University College London taught students a set of nine hand gestures to use while meeting online, some signals — like holding two thumbs up to show agreement or approval — were familiar and intuitive. But others, like putting one hand on the top of their head to signify they had a question, seemed less obvious.

Even so, according to the study — which was published in August in PLOS One, a peer-reviewed open-access scientific journal published by the Public Library of Science — students who used hand gestures reported that they had a better experience, learned more, and felt closer to others in their groups, compared with students who didn’t use the hand signals. The effect couldn’t be explained solely by giving participants a way to register their reactions — in a follow-up experiment that compared the use of hand signals with the use of on-screen emojis, researchers found that emojis not only failed to give users similar benefits to the hand signals, but in some cases, had worse results than if no signals were used at all, they wrote. “Something about the use of gestures specifically appears to help online interactions, whether it is the nuance of meaning they allow, or the physical action of performing or seeing them performed by others.”

Far from being a mere tagalong to speech, gesture is actually “the leading edge of our thoughts,” clarifying meaning for both speakers and listeners, writes Annie Murphy Paul in her book, The Extended Mind: The Power of Thinking Outside the Brain. When people are prevented from gesturing, they talk less fluently, and their speech becomes halting, she writes.

Numerous studies have shown that gestures increase learning significantly for those who are watching videos, she added. In one study, immediately after watching a video, subjects were 33 percent more likely to remember a point a speaker made if it was accompanied by a gesture, an effect that increased up to 50 percent over time. Yet it’s not an advantage that appears to be widely used: In a study that looked at 100 YouTube instruction videos, the instructors’ hands weren’t shown on screen 68 percent of the time.

Paul’s takeaway: “If we ourselves are called upon to teach online — or even just to communicate via Zoom or another video conference platform — we should make sure people can see our moving hands.”

What’s at the Heart of ‘Zoom Fatigue’