Hosts of The Boston Beer Company’s annual meeting and producers from Van Wagner Productions meet in the beer company’s Tap Room at Faneuil Hall, which was used as a broadcast studio for the live event.

The Boston Beer Company found itself in the same fluid situation as many companies and organizations when planning its Annual Meeting in 2021: COVID-19 made meeting in person out of the question just a few short months before the company’s three-day event in September, which typically attracts 800-1,000 employees, was supposed to take place.

The annual gathering didn’t lend itself to a Zoom call, said Kristen Early, the company’s purchasing manager, travel and events. “We needed to find a new solution — a way to present differently.” Ideally, Early said, the planning process for the company’s annual event starts at least eight months out, but because the COVID Delta variant “hit without warning, we were left scrambling to find a solution fast.” It was “by chance,” Early said, that the company connected with Van Wagner, a sports and entertainment production company that also produces virtual and hybrid events. Van Wagner’s sporting event production and broadcast experience “really caught our eye,” Early said. “This is what they do — they engage their audience. They’ve handled the Olympics, the Super Bowl, and the Kentucky Derby, to name a few. They know how to produce a show. We didn’t know the first thing about producing a show — we had no idea how to make this engaging.”

Selecting Van Wagner as its creative partner at the end of June, Boston Beer had around two months to plan a virtual experience that had as high of a production value as a television broadcast, complete with live demos, pre-recorded content highlighting the company’s brands, live Q&A and roundtable discussion sessions, company happy hours, and live performances.

Early said they conveyed their goals and objectives to Van Wagner — “what we needed to come out of the meeting. We really had to work together.” Their biggest concern was maintaining employees’ interest throughout the event. “Van Wagner helped us script the show where we needed to,” she said, “and were able to give us their advice on how to make each topic entertaining and engaging. It really was a collaboration from both sides.” Van Wagner Productions built a full broadcast control room inside the Tap Room to cut and stream the show on location.

Bringing the Brand to Life

One key element of the company’s annual event is brand plan presentations. “We had the brand director, who would normally be the presenter at the in-person event, work collaboratively with a Van Wagner producer to align on key messaging, goals, and objectives,” Early said. “Together, they would come up with a general concept for a ‘commercial’ fitting to each brand. The producers would bring each brand to life, making it fun and engaging by shooting at our local facilities with our own employees.”

The approach took them from the Annual Meeting’s typical in-person presentations with PowerPoint slides “to this really engaging 15-minute commercial for each of our brands,” Early said. “It communicated all the important points in an engaging way.”

“Boston Beer’s job is to educate their audience and present to them their mission,” said Bob Becker, president, Van Wagner Productions and executive producer for Boston Beer’s annual meeting. “Our job is to make it engaging and entertaining … something memorable that can be activated to help them reach their intended goals. Our team of producers, editors, and techs set out to bring their message to life using appropriate technology, set design, creative visual presentations, run-of-show development, overall scriptwriting, and show calling.”

The Van Wagner team put together a full two-day show, coordinating the program down to the minute, Early said. The Boston Beer Company’s executive leadership team presented live on a studio set at the company’s Tap Room in Boston’s Faneuil Hall.

Early said the virtual event was a big hit — the company’s employees “were in awe. No one knew what to expect because we hadn’t been in this position before, but they were blown away [by] the professionalism, the look, the quality, and the content — it totally stepped up our game.”

Boston Beer’s customers also have given the new video approach high grades. “Our wholesalers have watched the commercials in mini meetings with the same brand plan presentations, and their feedback was that they were above and beyond other supplier presentations. We were happy to hear that. We have quality products,” Early added, “so we want to present quality.” 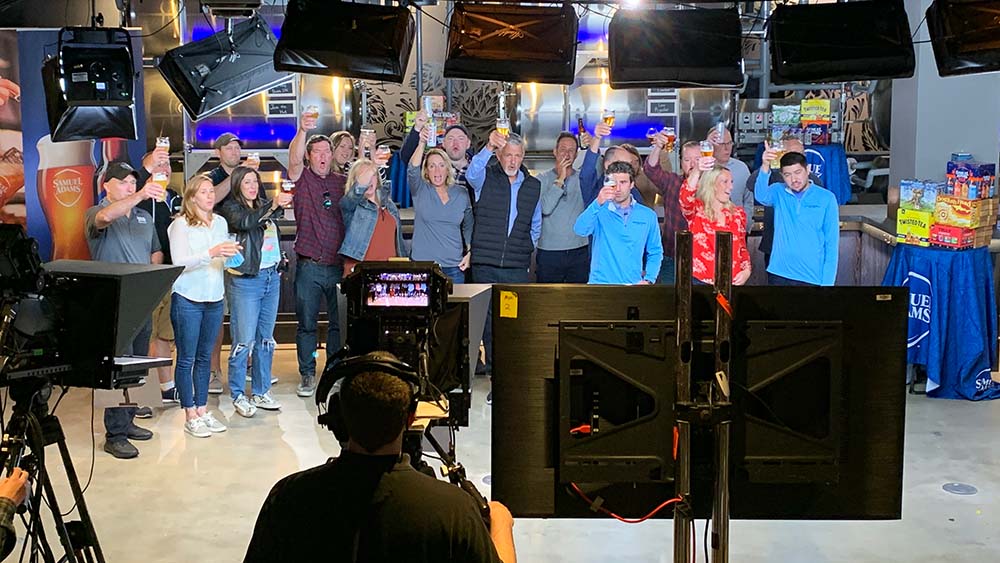 The event’s hosts raise their glasses for one final toast with audience members from around the country to close out the 2021 Annual Meeting.

‘We Can’t Go Back to Slides’

The lessons The Boston Beer Company’s team members learned about keeping their employees engaged from their virtual event will carry over to the way they plan their face-to-face annual meeting. “We can’t wait to get back in person,” said the company’s Kristen Early, “but we’ll never present the same way again. Because we can’t — we can’t go back to slides. … We’ll need to maintain this production quality and level of engagement as we approach in-person meetings.

“The engagement is key and that’s what we’ve all learned in the virtual world — that we’ve really upped our game because we have to when we are watching from a computer. But when we’re in person, we have to keep up that level of engagement. There’s no going back.”

Whether audience members are sports fans, employees at a company event, or participants at a business event, their takeaway should be the same, Van Wagner’s Bob Becker said. They should experience “a level of excitement and engagement that makes the event memorable,” he said, “to help build brand loyalty and a connection that sets the brand apart from others.”

On the Web: Understanding the difference between presenting and storytelling is critical for audience engagement. Read “What the Best Presenters Do Differently,” a recent Harvard Business Review article.