A recent in-person Executives’ Club of Chicago event included a discussion around The No Club’s theme of women doing dead-end work.

The award for speediest pivot to digital events after the COVID-19 lockdown should go to Executives’ Club of Chicago. “A lot of offices shut down that Friday and on the following Tuesday, we did a virtual program,” said Margaret Mueller, president and CEO of Exec Club, whose members are leaders at Chicago’s largest companies as well as civic and academic institutions. Before the pandemic, Exec Club held several in-person-only events weekly. When the pandemic hit, Mueller, who has led the organization since 2019, recognized right away that “no one knew what to do. They were all panicking.”

So, she worked to secure the former head of the Illinois Department of Public Health as the speaker to provide guidance for that first virtual event within days, which soon turned into a regular series of online events — “Coffee and Connects,” held four mornings a week and featuring experts in HR, finance, employment labor, and executive coaching. The programs were free to everyone in the business community, said Mueller, who has a Ph.D. in sociology, “to log on and connect and get help and guidance and support.” 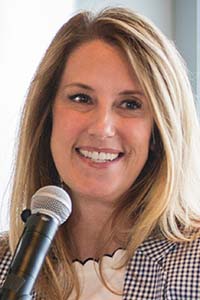 From there, “we exploded our programming,” doubling the online events and doubling Exec Club’s reach, she said. “We really leaned into our purpose, which is what I think most organizations who thrived through the pandemic did. I use restaurants as a great example — the purpose of a restaurant is not to have people come into a brick-and-mortar space and eat food, right? Restaurants that realized that their purpose was to bring people together through the enjoyment of food — and who did cool meal kits, carry-out, cook from home, Zoom live cooking with their chef, and all these engagement experiences — thrived.”

After an initial “48 hours of panicking like everyone else” after the lockdown, “we sat down and realized our purpose is not to bring people into venues,” Mueller said, “to eat lunch and drink iced tea and be talked at. Our purpose is to connect and grow the business community, and they need us more than ever. That’s what inspired these Coffee and Connect and advisory sessions.”

Mueller shared how pandemic-induced changes have made Exec Club a stronger and more successful organization than before COVID.

“This is a time when a lot of member organizations are struggling with membership renewals, and that’s why it was a little bit risky for us to make everything free to everyone because it could potentially devalue the membership proposition and the membership fee,” Mueller said. “But it ended up being the best thing we ever did because our members appreciated how much they had available to them for free. They loved connecting with people they’d never met, other people from the business community who were not members. And then for non-members, it became a sampling strategy — they hadn’t come to an Executive Club event before. They loved what they were experiencing, and then they would sign on for membership.”

The risk paid off. “That was the intent — to serve and just do the right thing and worry about the money later,” Mueller said. “And it did work out for us: We’ve doubled our membership in the last three years.” Part of that growth — there are currently 2,400-plus members — has come from acquiring a similar organization that was struggling. Mueller said the pandemic created an opportunity “to find a partner who can help you scale and help people do things when it was too difficult for them to do it on their own.”

Paying members access some events at no cost; for other programs, they pay an additional attendance fee at a much lower price than non-members. After the pandemic, Exec Club introduced a non-resident membership rate which gives them access to virtual programs only. If they come to Chicago and want to attend an event in person, they pay the non-member rate. Exec Club’s in-person events are designed to help make connections and are less focused on content, which can be delivered online.

The goal for the online programs from the start was to make them interactive, with an executive in residence speaker and curated open discussions. “We would put people together who we thought it would be good to get to know each other in Zoom breakout rooms” or other platforms like Sidebar, which Mueller called “a super cool drop-in video room technology.”

Having a stable of virtual programs has “allowed us to really expand our groups,” she said. Sponsors have been able to share the links to online programs with colleagues in other cities and other countries. “We had international people online, which never would’ve happened before,” Mueller said. Prior to the pandemic, Exec Club’s audience was “basically people in Chicago. And now we have a far-reaching audience all over the world. And it was easier for the speakers, too. We were able to get speakers [for whom] it would’ve been very difficult to fly to Chicago.”

So Exec Club will not be abandoning virtual events now that in-person events are back. Nor will physical events be livestreamed. The way Exec Club now approaches an event is that “if it’s really just about the content — if you’re going to pretty much be talked at, then we’re not doing it in-person,” Mueller said. “That’s a virtual event. You don’t need to come and be in the room to just receive information. But if there’s going to be an experience or something where you really want to be in the room and it’s not just about the content, that’s going to be in person. That’s a useful guidepost because no one wants to sit there and be talked at anymore. The rules have changed. People have much higher expectations now for what happens when they enter the room. They’re not going to have a very high tolerance for something that’s not engaging — they’ll think, ‘I could have just logged on from my computer.’”

In addition, Mueller has found livestreaming an in-person event creates too high of an attrition rate — “like 50 percent,” she said. When they held simultaneous events in the past, “people looked at their calendars right before the event and they’d say, ‘Ah, I don’t really need to go there. I can just log on and get the content the same way.’” You really need to be able to motivate people to come in person “because it’s too easy to just log on.”

Changes in work routines have led to shifts in the time of day when Exec Club in-person and online programs are offered. “After you’ve been working all day, the last thing you’re going to do is log onto a Zoom at 5:30 or six at night for a cocktail thing. You’ve got to get to your kids or your personal life or other responsibilities. I think the pressures are just tremendous. We’re also finding lunchtime is not a great time for in-person events anymore, because people are only in the office now, on average, two-and-a-half days a week, and those days are very heavy — they’re meeting with their teams, they’re meeting with clients. They no longer have time to take three hours out in the middle of the day. And the morning is really tough because of childcare and school and everything.

“We’re finding that sweet spot is 4 to 6 p.m., and that is a timeslot we had never considered before. We’ll have the networking, registration at 4 to 4:30, program at 4:30 to 5:30, and then a little reception after. Then people can get back home, and they haven’t missed a beat. Expectations have shifted — there are a lot of people who have said, ‘I’m not giving up dinner with my family anymore. I didn’t realize what I was missing, and I don’t want to do that.’ And honestly, hybrid work is a real thing. If you’re not already downtown, you’re not coming downtown just for an event. You’re just going to skip it.”

What the pandemic reinforced for her, Mueller said, is that organizations need to meet their audience where they are. She referred to a tweet by author John Hodgman: “Help in the way you’re asked to help,” adding, “not in the way you would like to help them.” 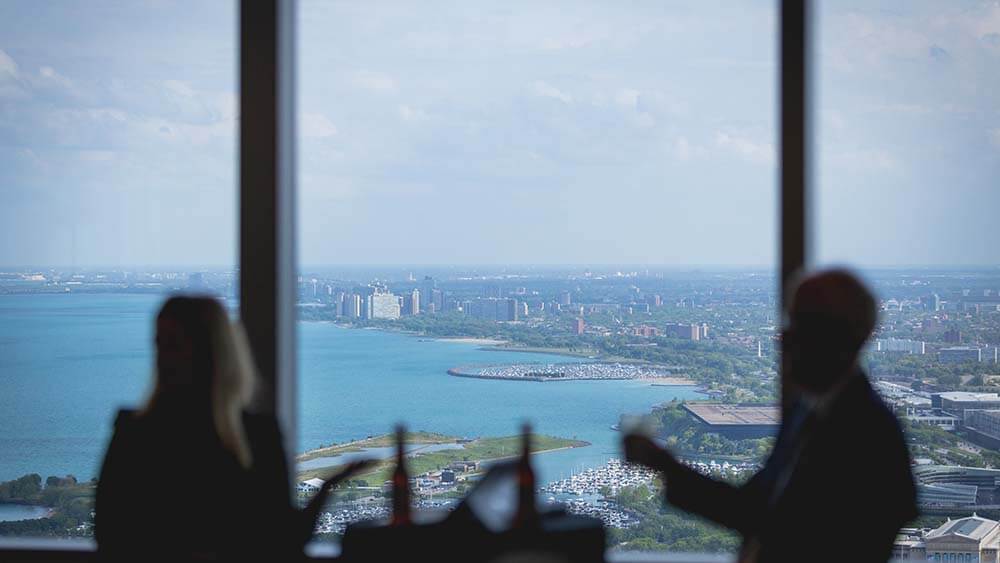 In-person events make the most of the Chicago location, while online events have cultivated a global audience.

The fear that you will miss something by not attending an event in person — “this whole FOMO concept,” said the Executives’ Club of Chicago’s Margaret Mueller, “has been turned on its head. The idea that you’ve got to show up, and you need the face time in the room. I think that has been completely disrupted. I think people don’t believe that anymore, and they’re being much more intentional and purposeful” about attending in-person events.

That’s challenging for event organizers, “because I don’t think people believe to the same extent they did before the pandemic that if they’re not there, they’re going to miss out,” she said, and she is continuing to “process what that means. I do not expect our events to get back to pre-pandemic levels for years — we’re coming back, but the event size is smaller. And I think that’s going to last for a while. It’s shifted. And in many ways, this is good. People want smaller, really. Although our sponsors don’t — they and our speakers want broader reach. But if you think about your members and attendees, they love walking to a room of maybe 50 to 100 people. That’s an amazing experience versus walking into a room of 500 people, and now you’ve got to try to work this room and see who’s here.”