THE PLATFORM FOR THE BUSINESS EVENTS INDUSTRY
Author: David McMillin Bubba Wallace, the only Black NASCAR driver and a key force in advocating for inclusion in racing, was one of the featured speakers at AFROTECH 2022. (Photos courtesy of AFROTECH™)

When AFROTECH™ launched in 2016, the conference — owned by Blavity, Inc., a technology and media corporation — aimed to show companies in Silicon Valley that there are plenty of Black people they could hire. A lot has changed since that inaugural conference. While around 650 attendees came to the first event, the AFROTECH™ audience has experienced exponential growth: 25,000 people participated in activities at the most recent edition of the conference. Another big difference is where they picked up their badges. While the conference had always taken place in California before the pandemic, AFROTECH™ organizers decided it was time to relocate to Austin in 2022.

“We searched for a host city that is accessible to our diverse audience and provides the infrastructure for the vibrant experiences and connections we craft for our attendees,” Morgan DeBaun, founder and CEO at Blavity, Inc., told PCMA. “Austin is that home.”

The new host city serves as a reminder that the Lone Star State capital is keeping pace with the Bay Area in the race to attract the innovators who are developing new game-changing technologies. The AFROTECH™ lineup included speakers from leading companies with significant operations in Austin, including Dell, Apple, and Amazon, which just announced a major expansion with plans to hire 2,000 workers there.

Additionally, the new host city showed that Austin’s tech ecosystem is a place where Black innovators can bring their businesses to life.

“Hosting the 2022 AFROTECH™ Conference is just one of the newest achievements Austin can tout,” said Dane Piper, director of services at Visit Austin. “Not only does hosting this event highlight Austin as a tech incubator, with many Fortune 500 companies placing secondary offices in our city, but it’s given Austin’s Black entrepreneurial community — not solely tech — a national platform it deserves.”

“People are discovering that not only is Austin a great place to visit and live; it’s also a profitable place to be a Black entrepreneur,” said Tam Hawkins, president & CEO of the Greater Austin Black Chamber of Commerce, when the event was initially announced. “This conference will help highlight the bevy of beauty within our economics and the culture.” 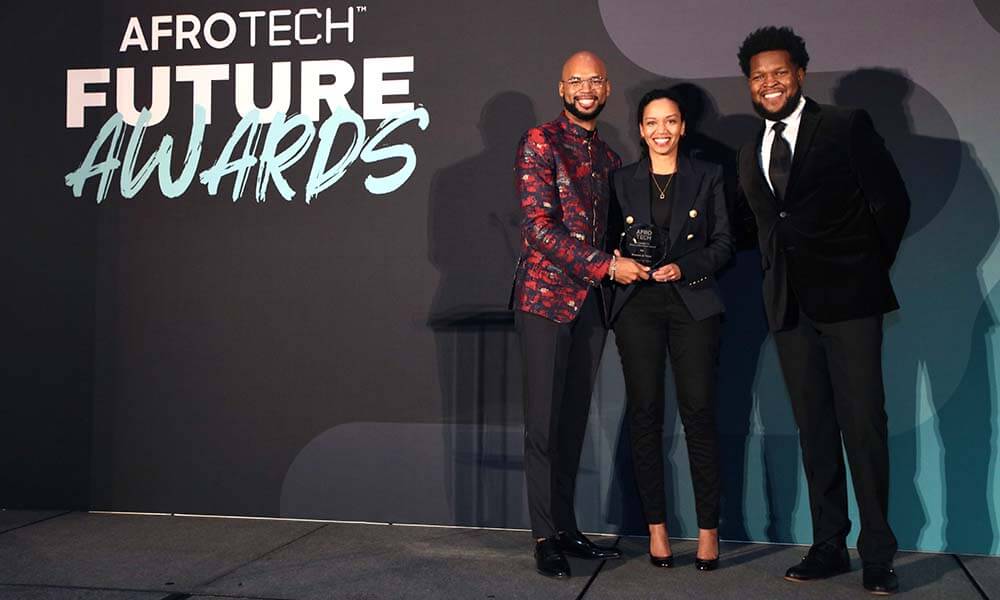 Dr. Iman Abuzeid (center) accepts the Women in Tech Future Award for her work as co-founder and CEO of Incredible Health from Haywood Perry (left) and Will Lucas. The AFROTECH Future Awards that honored some of the leaders and changemakers in tech and investing.

Turning Up the Volume

While Austin’s status as a premier startup destination — TechCrunch calls it “a city of unicorns and tech giants” — may have been the main draw for organizers, the city’s live music scene played an important role in the new conference format. “We were also excited to introduce our inaugural music experience in the Live Music Capital of the World, featuring a lineup of Afro-Latinx and Black artists,” DeBaun said.

With a lineup that included Bia, Zaytoven, Bas, DJ Moma, Wale and more, AFROTECH™ brought some of the most-recognizable names in hip hop to the main stage at the Austin Convention Center.

“Seeing this event come to fruition has been the highlight of my career thus far,” Piper said. “I’m very proud of Visit Austin’s efforts in connecting our client with Black-owned businesses, talented musical artists, venues that are unique to our destination, as well as heads of many municipal departments that contributed to the overall success of the event.”

AFROTECH™ will build on that success when the event returns to Austin in 2023.