Morningstar used VR to demonstrate a spirit of experimentation at its Morningstar Investment Conference (MIC).

The Enterprise Wearable Technology Summit (EWTS) is an eight-year-old event dedicated to business applications for virtual- and augmented-reality headsets and other tech wearables. Event organizers at BrainXchange, the New York City–based company that produces the event, considered creating a virtual exhibition hall as they were planning an all-digital summit for October 2020, said Emily Friedman, head of content at BrainXchange.

But they decided against it, even though the audience for EWTS is steeped in virtual-reality technology, Friedman said. “In the future, we think fully virtual events will be great, when the tech is more mainstream. But,” she added, “those platforms don’t really live up to their promise yet.” Instead, BrainXchange created a custom platform that used tools including video chat in its online exhibition hall.

Organizers of the Morningstar Investment Conference (MIC) wouldn’t disagree that virtual reality has yet to reach its full potential — but they came to a very different conclusion about the value of offering a virtual reality experience for exhibitors and meeting participants at their fall digital event. “We really looked at VR as an innovation play,” said Leslie Marshall, Morningstar’s head of experiential marketing, “and as a way to demonstrate that the company is experimenting with a new way of connecting with our audiences and delivering content.” MIC offered a VR experience not as an alternative to the networking, education, and virtual exhibition booths that were part of the overall experience, but as an upgrade for participants and sponsors, Marshall said.

Sixty-five of the conference’s more than 3,000 participants purchased a “Virtual Reality Pass” for $699, which included an Oculus Quest headset, and access to a virtual reality environment, which was created by the London, U.K.–based virtual reality content and experience company Mesmerise. (Non-VR participants paid $149.) By way of the headset, pass-holding participants entered a conference environment with blue skies, sidewalks, and city skyline views, where they could watch livestreams of keynote speakers in a virtual auditorium and visit exhibit booths. VR participants also could play an interactive, sustainable investing game and had access to on-demand video and other content.

The investment conference has offered participants VR empathy-related experiences at its in-person events since 2017, as a way to help investment advisors better understand clients who are going through cognitive decline, Marshall said. “We see VR as the way forward,” she said, and when the pandemic canceled its in-person conference in Chicago, the company decided to experiment with a virtual-reality exhibition hall and conference environment. 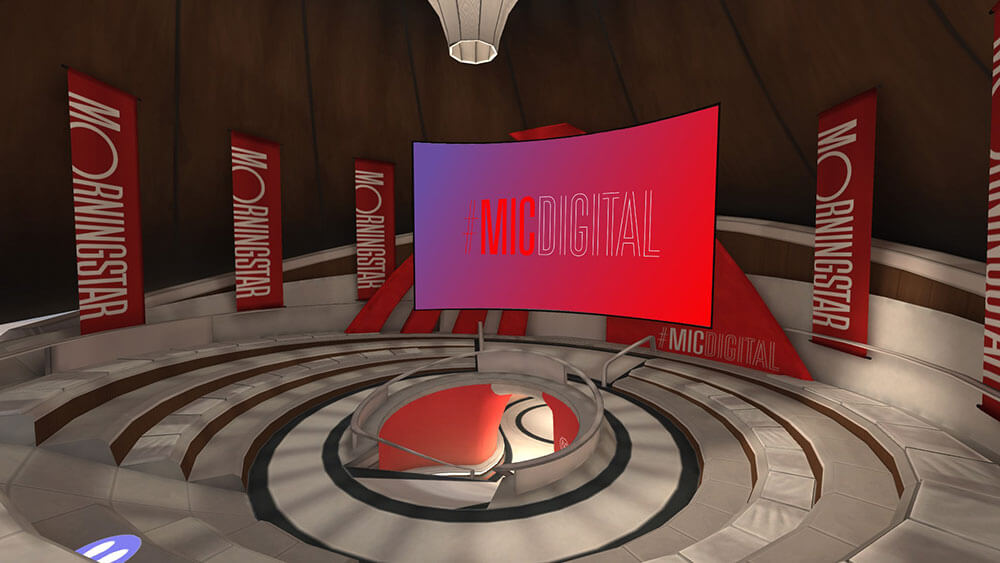 One of the key changes for 2021 will be adding the opportunity for attendees and exhibitors to participate as avatars and speak directly to one another: Mesmerise plans to create avatars for participants based on submitted selfies. This year’s fast-tracked experience that debuted at the 2020 conference lacked that kind of personal connection, Marshall said. The environment itself “was cool,” Marshall said, “and it was neat to see the spaces and feel like I was somewhere else. But I was really struck [by the sense that], I’m still alone in the middle of this big space.”

For the event in 2021, with the development of avatars, “you can put your headset on, go into the exhibit hall, and go into a sponsor booth, actually meet with someone, talk with them in VR,” Marshall said. Compared to Zoom meeting rooms and chat boxes, “we think that could be a very real and meaningful experience, both for the sponsor and for the advisor who is looking for investment ideas.”

Mesmerise founder Andrew Hawken said that that kind of shared experience — what he calls “co-presence” — will be fundamental to the success of VR in the future. “The moment that you start talking to someone in VR with avatars, you pick up on body language,” Hawken said. “You can stand in a semicircle and look at each other and gesticulate. It’s a different level of communication — particularly when you start to look at the same thing together.

“I think that sense of being able to network in VR is one of the real strengths of co-presence,” he said. Another strength “is around connecting with sponsors. In virtual reality, you can make booths very imaginative, and they can be manned by avatars, in the way you would normally have in an exhibition hall.”

Despite its commitment to hosting a virtual-reality exhibit hall, Morningstar recognized that most of its clients are older and don’t spend a lot of time with VR, Marshall said. “Their kids might use it, but they’re not necessarily ready to go buy a headset.” Mesmerise and Morningstar provided the headset in an “unboxing” event — the company sent a headset to Convene — and offered support for attendees new to VR. “We do think that using technologies like VR is one way we think we can connect with younger audiences,” Marshall said. One idea they are pursuing, she said, is making a VR headset a part of the scholarship award they have developed to bring finance students to the conference.

“We’ve always thought of [VR] as a long game,” said Hawken, who founded Mesmerise four years ago. In just that time, he’s seen VR go from a technology that needed a powerful computer, sensors, and wires, to a lightweight, wireless device that’s many times less expensive and can run on a phone application and two hand controllers.

“We only see this going in one direction,” Hawken said. “This is something that isn’t going happen tomorrow — there’s a lot of interest and traction right now.”