MURAL, a company that provides digital workspaces for visual collaboration, used its own digital whiteboard platform to create an interactive virtual event for is 250 global employees. (All image courtesy MURAL)

Laila von Alvensleben, head of culture and collaboration at MURAL, a global company that provides a digital workspace for visual collaboration, has planned more than a few events in her career. But last summer, when MURAL CEO Mariano Suarez-Battan requested that she plan a virtual retreat for the company’s 250 global employees, it was a big ask. It would be her first time planning a digital event for this large of a group — and she had only two weeks to pull it off.

In 2019, MURAL held its annual company retreat in person in Argentina, but in 2020, “because of COVID, we had to get creative,” von Alvensleben said. Luckily, the company’s own product is a creative, online collaboration tool. Here’s how she pulled it off.

MURAL is both the name of the company and the company’s digital whiteboard platform. To distinguish between the two, employees refer to the whiteboards they — and clients use — as “murals.” MURAL’s technology allows people to connect in an online meeting room and collaborate in real-time or asynchronously, similar to how colleagues work together in Google Docs. (This one-minute “What Is MURAL” video provides an overview.)

For this retreat, all 250 employees logged into Zoom, where von Alvensleben provided everyone with a link to a mural whiteboard they could log into on a separate screen to participate in the event and complete a number of pre-planned activities.

In effect, MURAL itself was the platform. Participants also used Slack, which the company uses as its instant messaging tool, to communicate in real-time throughout the retreat. Most people had two screens open throughout the event so they could participate in activities in MURAL and sync with colleagues in Slack.

The retreat’s main three goals were to: The day before the retreat, MURAL sent attendees an invitation in the form of a boarding pass.

Von Alvensleben rounded up 12 volunteers to help her. First, they brainstormed ideas for a theme, such as entertainment (movies, for example), classic decades such as the Roaring ’20s, and visiting interesting destinations. “We met daily for about seven days — 10 tops — and did a lot asynchronously, by email,” she said. The travel theme won, probably because everyone had been stuck at home for so long. “If we weren’t allowed to travel in real life, we were going to create a world where we could do it virtually!” she said. They named the retreat “Mural World Tour 2020,” and von Alvensleben would act as a flight captain, taking everyone on the travel adventure.

Next, they fleshed out the trip, got to work on the agenda, and distributed tasks to complete.

They decided employees would take a three-hour trip and “travel” from snowy mountains to tropical beaches — and then on to outer space. Using a metaphor about building a planet (Planet MURAL), the retreat would end with an inspirational speech about the future of the company.

Three tasks were assigned to volunteers:

MURAL sent participants physical party props that were to be used throughout the event, but also could be enjoyed after the event.

Because there was so little time to plan, “[we] paid attention to details but tried not to get lost in them,” von Alvensleben said. She and two other staffers made the major decisions and then explained them to the rest of the group.

To build interest, the group decided to keep the theme and itinerary (a mural) a secret until the day before the retreat. They sent gifts beforehand — props to be used during the event — such as sleeping masks for the flights, astronaut snacks, and sunscreen for the island. All were relevant and most could be used afterward, unlike purely promotional swag.

As a final step, the planners rehearsed the role playing and what the facilitators would say.

The day before the event, attendees received an invitation in the form of a boarding pass — an image shared on Slack. The itinerary mural included flight information and photos of the volunteers attired as the crew.

One artistic volunteer had created a video that paid homage to a fictitious event sponsor, which attendees accessed by scanning a QR code on the pass. “It made everyone laugh,” von Alvensleben said. They also were directed to fill out their passport and “pack their luggage” — i.e., have the props they received at the ready.

The itinerary, or agenda (yet another mural), was also revealed at this time, showing flight information, a picture of a plane, and photos of the volunteers attired as the crew — all wearing airline uniform hats.

Each employee could access a folder on a Google drive with images of everything they’d need on the journey, such as Zoom backgrounds (e.g., an alluring beach), to make the trip feel real and fully immerse attendees. To start, they saw a photo as if they were passengers in a VIP lounge at an airline terminal and read along as von Alvensleben welcomed them. She also revealed parts of the itinerary that had been hidden from view before this point.

While the CEO announced the funding, employees celebrated with their disco lights or glow sticks, items that were included in the box of props they received. Role-playing also added to the enjoyment and teambuilding; people were invited to wear appropriate attire for the stops on the trip.

Then it was wheels up, and off they went, with appropriate airplane murals. A volunteer moved an arrow pointer on the left of the screen to mark where the employees should be on the trip, and if they lost their place or needed help, someone in a “Lost” room — a channel in Slack — helped them.

From time to time, von Alversleben shared her screen to introduce an event, or directed people to “follow her” to a certain area. Employees saw each other in groups and as individuals in thumbnails on the screen, such as in their airplane seats in the same plane.

Facilitators of the small-group activities in breakout Zoom rooms had separate murals, directions on what to do, and scripts for what to say. Employees from different teams mingled in the speed- dating activity and stamped their passport for each person they met. The Escape Rooms required employees to work together and find clues that would get them to the next Escape Room in another mural. “There were inside jokes, lots of puns, and innocent attempts to cheat where people would try to get answers from other teams in an Escape Room,” von Alvensleben said.

A surprise-and-delight element — a band of MURAL employees performing a song — was added to the schedule during breaktime. “People hadn’t seen a live show during lockdown,” von Alvensleben said. “It was actually prerecorded, but everyone felt like it was live. They went crazy.” 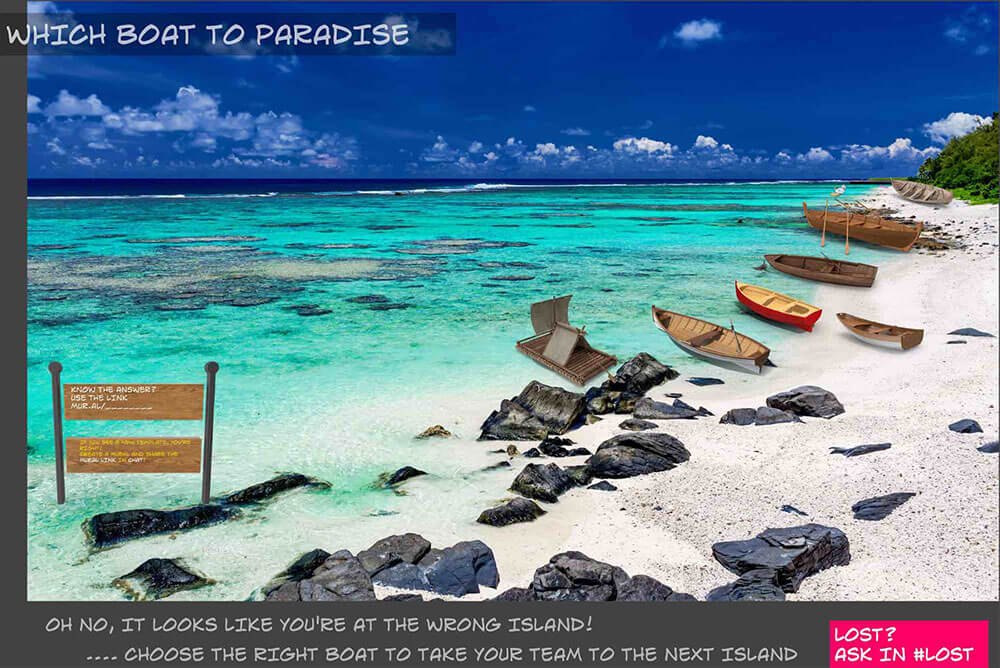 Organizers built four escape rooms in MURAL. where attendees worked together to find clues that would get them to the next escape room in another mural.

“We met the objectives and also pushed the limits. No one had ever created Escape Rooms with Mural,” von Alvensleben said.

The company is already planning another virtual retreat, and based on last year’s event, there will be a few easy adjustments. Three hours felt a little long for the experience, so she’ll cut it back to two-and-a-half-hours. And ordering the gifts from Amazon took 15 hours, or two full days — a task she’ll outsource in the future.

Additionally, there were a few hiccups that will need to be addressed for the future event. The series of Escape Rooms, while fun, were “a little too tricky,” for employees, especially new ones, von Alvensleben said. And there was a glitch at the end — “we supplied an incorrect password at one point so no one could reach the last room,” she said — which made it a little awkward. A positive came from it, however: It was a good indication of whether employees really knew how to use MURAL.

In addition, the planning group had wanted to end with everyone on a rocket ship and an inspirational speech about heading into the unknown to build Planet MURAL, but the person charged with delivering that seemed to have a connectivity issue and disappeared. Von Alvensleben took over but didn’t know the speech as well and felt she was rambling. She would have ended it with the band’s performance and saved the planet part for another retreat.

Elements that will be making a return appearance include the surprise-and-delight feature — she said that she is confident she and other event planners can always find ways of surprising people, no matter the size of the group. Also key to the experience was programming small-group activities for such a large group, so that will stay. “If you keep the rhythm going, people will stay engaged,” von Alvensleben said.

Most of all, she’ll continue to keep an open mind and just go for it. The MURAL platform allowed von Alvensleben’s imagination to run wild — she also “has a bit of Peter Pan” in her and didn’t allow herself “to be limited,” she said.

Her expansive thinking paid off — the staff provided lots of positive feedback. “People had such a different perspective of what a virtual event would be compared to what we did. We even had bird and wave noises in the background on the island, and wind in the mountains,” von Alvensleben said. “We pushed the limits in general of what’s possible in online events. It’s opened possibilities for what we can do internally.”

The full MURAL case study of the event is posted on the MURAL blog.

Pat Olsen is a freelance writer based in Tinton Falls, New Jersey.