By 2050, the United Nations predicts the world’s population will reach nearly 10 billion — a significant jump from the approximately 7.7 billion residents alive today. How will the Earth nourish so many inhabitants? 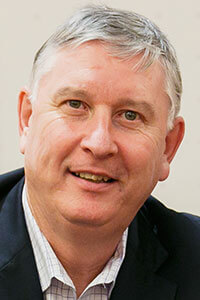 One potential path to food security is vertical farms, a sustainable, clean-tech technology. At least, that’s how Brian Sullivan sees it. In late 2018, Sullivan, president and CEO of Great American Expo, joined forces with Nancy Hallberg and Kris Sieradski, the co-founders of Connections Housing, to acquire Indoor Ag-Con, an annual event that focuses on growing crops in indoor systems. “As the population grows, farming that relies on acres of land, irrigation, and fertilizers encounters some big issues,” Sullivan told Convene. “Indoor farming, on the other hand, may only require five percent of the amount of water, and you can do it in Midtown Manhattan if you want. Our show is trying to show people how to do it from start to finish and how to make sure their food safety practices are correct.”

Indoor Ag-Con’s diverse audience of around 600 attendees includes chefs, policymakers, produce buyers, and investors who are taking cues from the likes of Softbank and Google Ventures, two companies that already have made sizable bets on the vertical farming industry. As Hallberg looks ahead to the 2020 edition of the show, scheduled for May 18–20 at the Wynn in Las Vegas, she said she has noticed the show is attracting more interest from the hospitality sector. “We’re seeing hotel chains and convention centers that are interested in coming,” Hallberg said. “In addition to playing a role in leaving the Earth better for the future, there is a marketing angle that this kind of hyper-local growing process offers.” Attendees can see where their food comes from “when they walk in the door” of Orlando’s Orange County Convention Center.

Indoor agriculture already has taken root at a number of event venues. For example, the Smart Farm in the North Building of the Greater Columbus Convention Center in Columbus, Ohio, opened in 2017 and yields between 2,000 and 3,000 pounds of Swiss chard, kale, arugula, basil, mint, and other greens each year. In 2018, the Orlando World Center Marriott unveiled the HyCube, a first-of-its-kind glowing structure located next to the hotel’s main kitchen, which grows lettuce, spinach, herbs, and edible flowers that are used in catering menus for groups using the property’s 450,000 square feet of meeting space. Fifteen mobile towers can be wheeled “into a meeting room or on a show floor where we want to create a more unique impression,” said Molly Crouch, corporate sustainability director, Centerplate, which is the exclusive provider of F&B services at the OCCC. “It creates a beautiful backdrop.”

Beyond the aesthetics, the vertical gardens tell a story, Chef K said. “This is what a lot of people are looking for,” he said. “They want to hear who made their food and where it came from. They want the story. And they can see that story when they walk in the door.” The harvest cycle for the OCCC towers’ plants is a mere four to eight weeks, but the initiative itself took four years to come to fruition. After numerous meetings with elected officials to secure approval for the project, Crouch said, the first crops were planted in May 2016. Since then, the culinary team and the dedicated farm manager who takes care of the day-to-day duties have refined the operation. “There were some issues we didn’t think about when we first started,” Crouch said. “We have hard water in Florida, so there were additional filtration requirements, and we also learned that we needed to install fans to help balance the temperature of the hot lights.”

Now, the bounty from the garden is an essential piece of the center’s food and beverage operation, valued for its consistency and convenience. “The procurement chain is downstairs,” Chef K said. “It makes a huge difference because getting lettuces and herbs from our vendors can be challenging. In the summertime, it’s often too hot here, and when the weather cooperates, a lot of the produce gets shipped out of Florida.”

As the center continues to grow — officials recently approved a sixth phase of the building’s expansion plans — Crouch aims to have the gar- dens follow suit. “The goal,” she said, “will be to have another farm that can double the volume.”

In addition to a greater abundance of crops, the additional vertical farms will likely yield some new varieties. Chef K is in the midst of exploring growing methods for indoor tomatoes and peppers. In the future, other convention centers likely will take a page from the OCCC’s vertical farming example. “Looking ahead, Centerplate is in more than 30 centers around the country,” Crouch said, “and we have interest from a number of them.”

Meanwhile, the Orlando World Center Marriott has made a chef ’s office in the HyCube a unique venue for private dinners and receptions and is expanding HyCube’s footprint. Gary Dybul, the property’s director of sales and marketing, told Convene that they have added approximately 150,000 square feet of additional production capacity since opening. “The future is limitless for HyCube,” Dybul said. “We are actively looking at additional ways to maximize its potential.” As more hotels and convention centers embrace vertical farming, the events industry will be able to contribute to the effort to address climate change by producing crops that require less water and no toxic fertilizers. However, the growing global population will not be able to subsist on a diet of romaine, chives, and flowers.

That’s a big challenge that Indoor Ag-Con producer Brian Sullivan wants to tackle at the annual event in 2020. “It’s not just about greens,” he said. “This year, we’re offering sessions on alternative crops.”

The other two core tracks being offered at Indoor Ag-Con 2020 are business and science/technology. In the latter track, attendees will be able to participate in sessions on aspects of indoor farming production involving alternative consumable proteins like crickets and black soldier flies for fish and chicken feed. A panel discussion, “Insects Plus,” will feature Eric Tilton, chief technology officer at HermetiaPro, who is considered an expert in the black soldier fly farming industry.

If black soldier flies sound like unusual part of a sustainable food-producing future, other pieces of the vertical farming pollination process can seem more like the stuff of science fiction. “Think about robotic bees,” Sullivan said. “You’re not going to bring real bees indoors.” One retailer is, in fact, doing more than thinking about it: Walmart filed a patent for autonomous robotic bees in 2018.

“This industry is in its infancy right now,” Sullivan said. “Indoor agriculture is only going to get better as technology gets better. You’ll get fresher and faster food.”

David McMillin is an associate editor at Convene. This F&B article is supported by Louisville Tourism.