When chef and food historian Loretta Barrett Oden founded the Corn Dance Café in Santa Fe in 1993, it was heralded as the first restaurant in the United States to showcase the Indigenous cuisine of America. At the time, “you could go to any city in this country and find Mongolian barbecue, Italian, French, everything,” said Oden, a member of the Citizen Band Potawatomi Nation and chef consultant for Thirty Nine Restaurant at the First Americans Museum (FAM) in Oklahoma City. “But there was nothing that really represented Native American food,” Oden said, “except perhaps a fry-bread house.” Chef and food historian Loretta Barrett Oden is on a mission to use food to retell the stories of Indigenous culture in America.

Today, three decades later, Indigenous chefs, restaurants, and food producers are flourishing and their numbers are multiplying. One measure of their rising profile is the fact that Owamni, a Minneapolis-based restaurant owned by chef Sean Sherman, who is Oglala Lakota Sioux, was named the best new restaurant of 2022 by the James Beard Foundation. For many chefs, including Oden and Sherman, founder of a nonprofit organization and a training center for Indigenous food enterprises, their purpose goes beyond preparing meals. It’s an opportunity to share the mostly unknown history of Indigenous food culture and its intersection with American history.

Take fry bread, for example, which, Oden pointed out, is what most people think of first if they think of Native cuisine, but “is not really Native at all.” Although she admires the creativity of the Indigenous cooks who made something delicious out of common ingredients, “it’s not exactly the healthiest fare,” she said. Fry bread was “a product of the government commodities program when we were in desperate need for food. And its ingredients — white flour, sugar — are not good for us.”

Oden, who grew up in Shawnee, Oklahoma, is descended from one of the bands of Potawatomi people who were forcibly removed by the federal government from the Great Lakes region into Indian Territory, now Oklahoma, in the 19th century. “I grew up in the kitchen, listening to the stories and out foraging and planting with my grandmother, my great-grandmothers, my aunties, and my mom,” said Oden, who is 80. But even Oden was unaware of the diversity or global impact of Indigenous cuisine until she encountered the work of cultural anthropologist Jack Weatherford, who wrote about topics including how many of the foods first cultivated by Indigenous communities in the Americas, where gardening has a 10,000-year-long history, have made their way into the world.

“Everyone thinks of Irish potatoes or Dutch chocolate,” but potatoes were first cultivated in the Andes, and chocolate came from the Mayan and the Aztecs, Oden said. “So many of the foods eaten around the world today left these shores and impacted the cuisines of the world. I mean, what would Chinese or Thai food be without the heat of the chili peppers? There were no chili peppers anywhere else in the world but here in the Americas. The same with corn and beans and squash, and the list goes on and on. People are not aware of that.”

Oden opened the Corn Dance Café after visiting tribes in North America and collecting recipes that reflected the range and diversity of Indigenous ingredients, including bison, salmon, and the “Three Sisters” — squash, corn, and beans. “People were so taken with what we were doing,” Oden recalled. “It got me on the ‘Today’ show and ‘Good Morning America’ and The Food Network, which was just starting out then.” It also led to a PBS series, “Seasoned With Spirit: A Native Cook’s Journey,” which Oden wrote and hosted, and for which she won an Emmy. She also began to be invited to speak at Indigenous food summits, including the Great Lakes Intertribal Food Summit, which brings together chefs, Native food producers, Indigenous community leaders, and others at workshops on traditional foods, community land management, seed sourcing, and other topics. “It gets the producers and the chefs and other interested people involved, and gets them together in one place,” Oden said. “We’ve had some astonishing food summits.”

Oden’s goal is to create similarly memorable experiences at Thirty Nine Restaurant, which also serves as a catering service for events at the museum. The name refers to the 39 federally recognized tribes now living in Oklahoma, most of which, like the Potawatomi, were forced from their homes and sent to Indian Territory from all over the United States.

That diversity gives Oden the freedom to source ingredients from throughout the U.S. “If we have a really large group, several hundred people, I love to do something like a braise of bison,” she said. “We have gigantic kettles, and we can cook it long and slow.” Much of Indigenous cuisine is plant-based and naturally dairy and gluten-free, making it easy to adapt to groups. “We have had just about every imaginable menu request, and we’ve been able to deliver,” Oden said. In Indigenous cooking, “we use fresh, organic, regional, seasonal products,” she said. “We do stretch [Indigenous ingredients] occasionally because sometimes I’ve just got to have some whipped cream with dessert.”

Other resources available at FAM include Indigenous storytellers, artists, dancers, and musicians. “We can create something that is so special and people leave here really enlightened,” Oden said. The opportunity to share this knowledge “is pretty amazing,” she added. “And my goal is to use food to tell those beautiful stories and to teach people a true history of America.”

‘There’s Nothing More Political Than Food’ 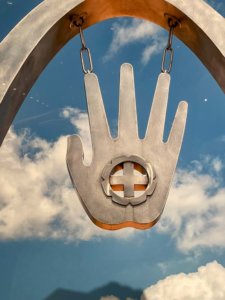 “Touch to Above,” a 2010 sculpture by Cherokee artists Demos Glass and Bill Glass Jr., stands in front of the First Americans Museum in Oklahoma City. The 13-feet-tall stainless steel piece serves as a welcome gateway for all visitors.

One reason Indigenous food historian and chef Loretta Barrett Oden devoted herself to food is because it seemed far removed from politics, she said. “I thought: ‘I don’t like politics. Let’s get into the food,’ And then, I realized, uh oh, there’s nothing more political than food. To be able to access food is a right that everyone has, and that’s why I think sovereignty issues are so, so important — food is critical to every living being on the planet.”

Oden is a founding member of the Native American Food Sovereignty Alliance, a nonprofit that advocates for food security and food sovereignty — the right of people to control their own food systems — for tribes and communities. The Alliance’s goals are “to restore the food systems that support Indigenous self-determination, wellness, cultures, values, communities, economies, languages, and families while rebuilding relationships with the land, water, plants, and animals that sustain us.”

Barbara Palmer is deputy editor of Convene. Ascent is supported by the PCMA Foundation.