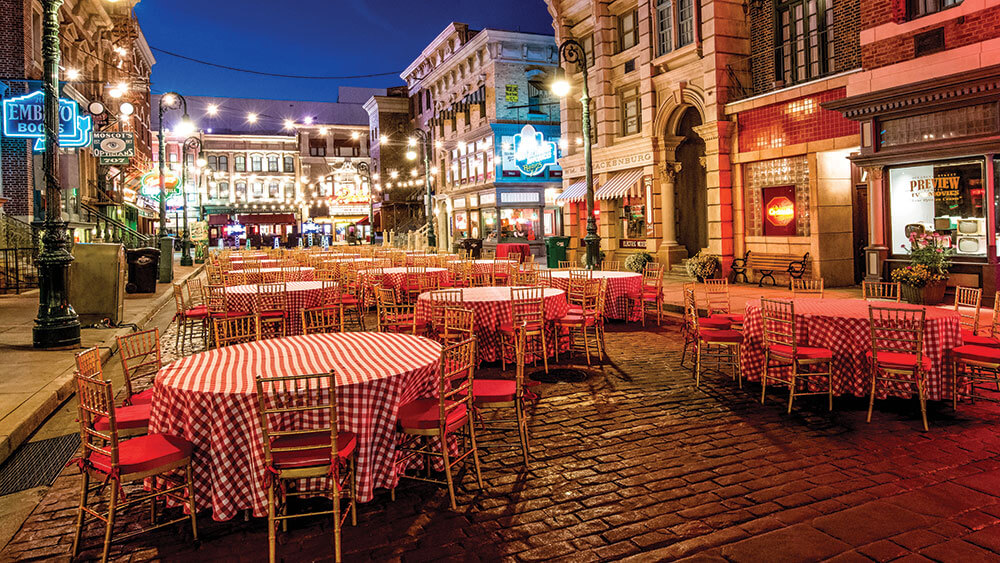 It may not look like Orlando, but Universal Studios Florida has plenty of options for groups planning to meet in Orlando — including events at CityWalk’s New York area. (Courtesy Universal)

I’d never been to Orlando, so a media trip hosted by Visit Orlando in early May seemed like a great opportunity to learn what the destination offers groups. Turns out I joined the ranks of several million business event attendees who flock there — 7.5 million of them in 2018, in fact.

Under an hour from Orlando International Airport, and a world away is the 443-room Four Seasons Resort Orlando at Walt Disney World Resort, where I spent the first two nights of my three-day media trip. With its lush greenery and serene lakes, the Four Seasons feels more a part of the surrounding everglades than Disney World — although one of my in-room amenities, cupcakes, did have mouse ears. The on-site bakery also left for each member of our group a chocolate replica of their publication as an example of the kind of branded amenities available for groups. Many of the meetings spaces at the Four Seasons Resort Orlando at Walt Disney World Resort look out over the lush grounds of the property. (Curt Wagner)

At the property’s Tom Fazio–designed golf course, which recently underwent a $2.5-million renovation, groups can play day and night — glow golf is becoming a popular group event. In addition, two areas of the course can be used for receptions and banquets serving up to 900 guests.

After touring the facility, we were ushered into the on-site Ravello’s demonstration kitchen, where sous chef Massimiliano Gallinoni gave us a hands-on lesson in making fresh pappardelle, the pasta in the traditional Bolognese sauce we would soon feast on as part of our three-course dinner.

Following our delicious carb fest, we went up to Capa, a rooftop restaurant where we watched, between bites of dessert, the nightly fireworks at Magic Kingdom Park from the terrace — one of the few reminders that I was staying on Disney property. Parts of the golf course at Four Seasons Resort Orlando at Walt Disney World Resort can be used for special mini-golf events (above), or receptions and banquets serving up to 900 guests. (Courtesy Four Seasons)

The next morning, I met up with my group for a 20-minute drive to SeaWorld Orlando, the first of many stops on a long day of adventures. A brunch buffet — biscuits and gravy served in a martini glass, Korean short ribs, portobello mushroom sliders, and French toast stuffed with fruits and cream — gave us a big taste of what SeaWorld can prepare for groups. Groups have a lot of options at SeaWorld, including spending some time with penguins like this Rockhopper. (Curt Wagner)

SeaWorld’s indoor/outdoor spaces can host up to 1,800 guests for dining functions or receptions, including the more peaceful and private Discovery Cove, which can accommodate parties of up to 500 guests.

One of SeaWorld’s most dazzling venues, Sharks Underwater Grill, can host up to 230 guests for a three-course plated meal of surf-’n’-turf specialties while they watch sharks, fish, and other sea animals swim around in their giant aquarium. Sections of the park also are available for group buyouts, including Shark Wreck Reef, where we took a ride on Mako, the park’s newest — and Orlando’s tallest, fastest, and longest — roller coaster. (If you happen to see a photo of a man clenching the ride’s safety bar in a death grip, that would be me.)

A buyout of Antarctica: Empire of the Penguins not only gets you space for up to 1,200 guests, but also a close encounter with the black-tie birds. Another perk to booking an event at SeaWorld is how it’s practically a built-in CSR project. Events help SeaWorld provide an estimated $10 million in donations and in-kind services every year for animal rescue and conservation efforts, and SeaWorld can arrange for speakers to talk about these efforts for groups. 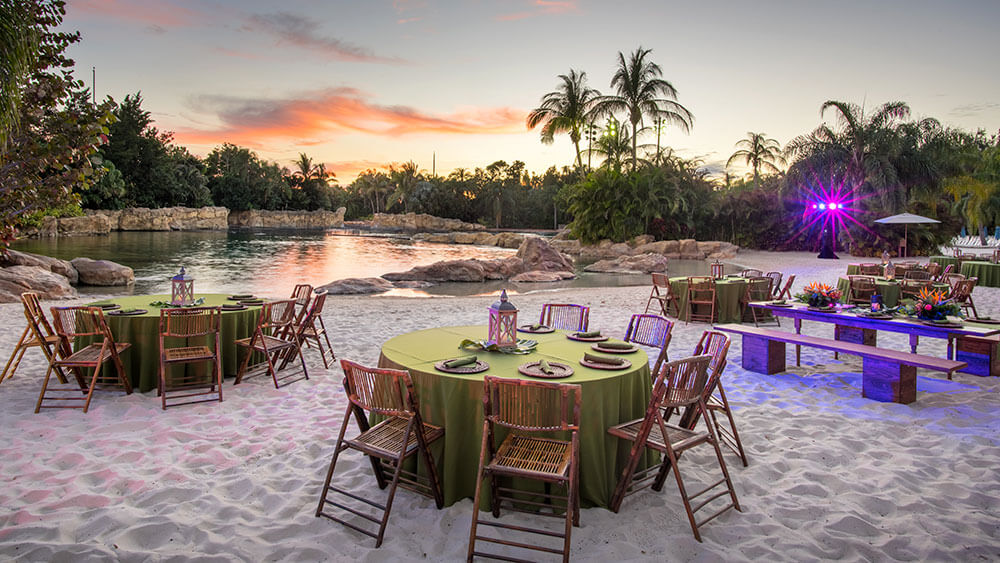 I thought nothing could top hanging out with those penguins, but Universal Orlando Resort, the next stop on our tour, was full of diversions. A 20-minute van ride brought us to Loews Sapphire Falls Resort for a lunch buffet of jerk chicken and other Caribbean dishes at Strong Water Tavern.

We heard from Vince LaRuffa, vice president of sales and marketing at Universal Orlando, who attributed the resort’s incredible growth to the opening of Wizarding World of Harry Potter — “a seminal moment,” he said. The number of visitors continues to grow, he added, which “has allowed us to add new hotels and meeting space.” The charcuterie board at Wine Bar George in Disney Springs paired well with the wine proprietor George Miliotes chose for us. (Courtesy Wine Bar George)

By 2020, there will be eight properties — Universal’s Endless Summer Resort, which will consist of Surfside Inn (opening August 2019), and Dockside Inn and Suites (opening March 2020). The two additional hotels will bring the number of guest rooms to 9,000 at Universal Orlando.

Most of the meeting facilities at the Loews properties are located within walking distance of — or close to water taxis that will take attendees to — venues within Universal’s three theme parks: Universal Studios, Islands of Adventure, and Volcano Bay. Universal properties utilize the parks for their “meeting enhancements” program, which brings Universal’s most recognizable characters into elements of an event, such as “Transformers” character Optimus Prime introducing a keynote speaker or the Minions engaging with attendees.

As we toured CityWalk at Universal Studios, Senior Manager of Event Sales Rebecca Peyton told us that “literally anything in this park can be purchased” for an event. Buyouts can include taking over Diagon Alley at Wizarding World of Harry Potter to block parties for up to 6,000 guests in one of the CityWalk spaces. If you decide to give your group a Harry Potter experience, you could drink Butterbeer (and more) at the Leaky Cauldron restaurant and zoom through the 3D chills of the Escape to Gringotts ride. We did both, and even this Harry Potter novice was thrilled.

We hopped back on the water taxi, which took us to Italy-themed Loews Portofino Bay Hotel for a tour and a cocktail and nosh reception on a terrace overlooking the bay while an opera singer serenaded us and other guests from another terrace.

Our last stop of the day was Disney Springs, a shopping, dining, and drinks campus undergoing its own renaissance. The interactive, basketball-themed NBA Experience opens this summer, with 13 activities spread across approximately 44,000 square feet and two floors that can be used by groups. We walked the grounds as we headed to our destination, Wine Bar George, where owner and Master Sommelier George Miliotes hand-picked the wines we paired with delicious small plates.

True to its Italy theme, Loews Portofino Bay Hotel at Universal Orlando looks just like an Italian village from the water. (Curt Wagner)

On our third day, following breakfast on a lawn outside the Four Seasons spa, we left for our one-night stay at the 2,267-room Walt Disney World Swan and Dolphin Resort in the heart of Walt Disney World Resort. The property recently completed a three-year, $150-million renovation and added a 2,800-square-foot meeting and event space.

More is on the way: A third hotel, a 14-story tower called The Cove, is adding 349 guest rooms and more than 22,000 square feet of meeting space — including two ballrooms, 12 meeting rooms, a 16,800-square-foot elevated deck, and a rooftop reception space that will provide views of the nightly Walt Disney World fireworks — by fall 2020. All combined, the resort’s three properties will have more than 350,000 square feet of meeting space and 2,600 guest rooms. 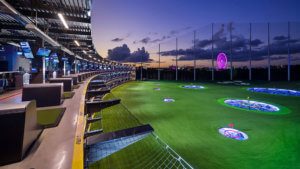 TopGolf Orlando, just minutes from the Orange County Convention Center, offers meeting planners a different kind of venue for their team-building or other events. (Courtesy TopGolf)

We then headed over to the Orange County Convention Center, about a half-hour drive away, for a peek at what’s new at the country’s second-largest convention center. The 7-million-square-foot center currently is in the design phase of big improvement plans for the North-South Building. A new multipurpose venue will add 200,000 square feet of flexible, divisible, and column-free space that will offer a combination of retractable and floor seating, accommodating between 18,000 and 20,000 guests. The new Convention Way Grand Concourse will include 60,000 square feet of meeting space and an 80,000-square-foot ballroom.

After other presentations, we dined at Ocean Prime on Sand Lake Road, Orlando’s “restaurant row,” before wrapping up our day — and our trip — at Topgolf Orlando, which opened last fall near the Orange County Convention Center.

The venue offers more than 100 climate-controlled hitting bays using technology that tracks the accuracy and distance of players’ shots — and a full-service restaurant and five rooms of various sizes for private events. Groups also can do full buyouts of the meeting rooms and golfing bays for fundraising events and team-building exercises — as long as your attendees aren’t embarrassed by all those swings and misses (speaking strictly for myself). Luckily, all my other Orlando experiences were spot-on.