In Philadelphia, the Invisible Industry Tour’s trailer hosted municipal officials who were in town for a retreat.

The “Invisible Industry” was a label put on the meetings and hospitality industry more than two decades ago by broadcaster Charles Osgood, who used it in a 1996 documentary to describe what he called “an industry that no one thinks about, let alone thinks about as an industry.”

It hit home how little that perception has changed when the meetings and events industry was left out while other sectors received federal pandemic relief, Laura Palker, founder of the National Trade Show Alliance (NTSA), told Jim Cermak, host of the Trade Show University podcast. “The meetings industry and the jobs it supports is larger than the automobile industry, yet no one knows about us — not the federal government, not our friends and neighbors, not our families,” Palker said. “It’s time to change that.”

The vehicle NTSA chose to raise the industry’s profile is literally that — a 49-foot trailer stocked with interactive media, which launched a year-long “Invisible Industry Tour” of U.S. cities last June. 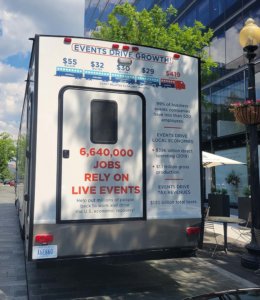 Inside the tour bus, guests participated in interactive presentations and gamifications, and viewed exhibits and time-lapse videos showing the work that goes into trade shows.

The NTSA is a grassroots volunteer group made up of a network of industry colleagues, leaders, manufacturers, meeting planners, exhibit designers — “everyone,” Palker said, “whose livelihood is based on the live-events industry.” There are industry advocacy groups that are lobbying the federal government, but NTSA is looking to connect with local policy makers and city leaders, including those in economic development organizations and chambers of commerce, Palker said. “We want them to hear the voice of the more than 6 million workers who are essential to our sustainability and our future,” she said. “We want to look them in the eye and talk about the impact that our industry makes on economic recovery.”

The tour’s purpose also is to connect with university students and other potential workers to let them know about opportunities in the live-events industry, she said. “As we bring back the power of live events, one of the most important things is to help rebuild our workforce. Our theme is “Find Your Passion: The Next Generation.” Those goals came together in a recent stop in Philadelphia, when the “Invisible Industry Tour” trailer parked outside the Philadelphia City Hall, two blocks away from the Pennsylvania Convention Center, on Sept. 15-16. For those two days, the mobile exhibit hosted participants who were meeting in Philadelphia for the Democratic Municipal Officials (DMO) National Advisory Board Retreat, students from nearby Temple University, and others.

As events have returned, in addition to supply- chain issues, there is a labor shortage, said Al Mercuro, a senior account director for Genesis Exhibits, and a member of the NTSA advisory board. “It’s a good problem to have — events are coming back,” but the shortages are adding to the timeline problem in producing them, he said. There are opportunities in the live-events industry for college students, as well as for veterans of the military, who have many of the skillsets needed by the industry, he added. “There are so many jobs out there — for carpenters, electricians, designers, and sales- related jobs. They run the gamut.”

The tour has made stops in cities including Washington, D.C. and Baltimore, and plans future stops in Florida, Mercuro said. “We really want to build up the awareness that people can find good jobs in the industry. It’s a labor of love program.”