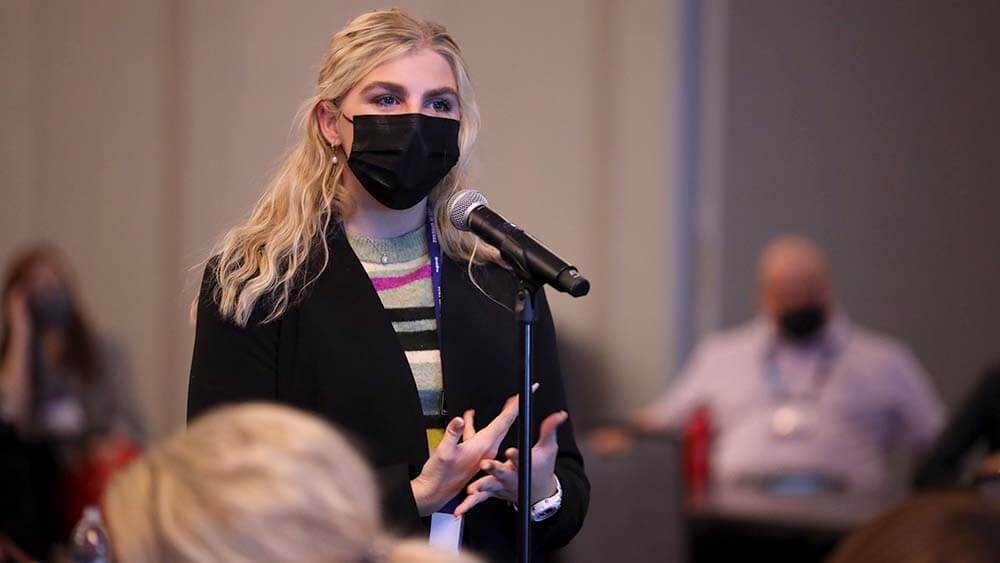 An attendee at Convening Leaders 2022 speaks during a session. Data from Nature shows that more women participate in conference Q&As when session chairs invite women to ask opening questions after a talk. (Jacob Slaton Photography)

In December 2019, after an analysis of gender diversity at its conferences showed that progress toward gender equity was well-intentioned but inconsistent, the journal Nature announced that it was taking a new approach. The journal’s scientific research publishing company introduced a code of conduct for the approximately 30 events it organizes, which included commitments against holding sessions with manels — all-male panels — and all-male organizing committees. The code also committed organizers to invite equal percentages of women and men to be speakers, and to hold themselves accountable by publicly reporting on their progress.

Those numbers are “an encouraging start,” but more changes are needed, Nature’s editors wrote in the report. They cited data from the Society for Endocrinology’s annual national conference, which showed that even when the numbers of male and female delegates are equal, “women attendees participate less and tend to ask fewer and shorter questions.” A simple intervention made a difference, they added. When conference organizers were asked to include more female session chairs, and the chairs were encouraged to invite opening questions from women whenever possible, questions from women rose to 35 percent, up from 24 percent the previous year.

Last year, like many other conferences, Nature’s conferences were virtual, and early research suggests that online formats can be more inclusive than in-person events, the report said. “It is absolutely essential that these modest gains are not reversed once in-person events return,” they wrote. “There’s a very long way to go to achieve full equity, inclusion, and diversity at scientific conferences.”