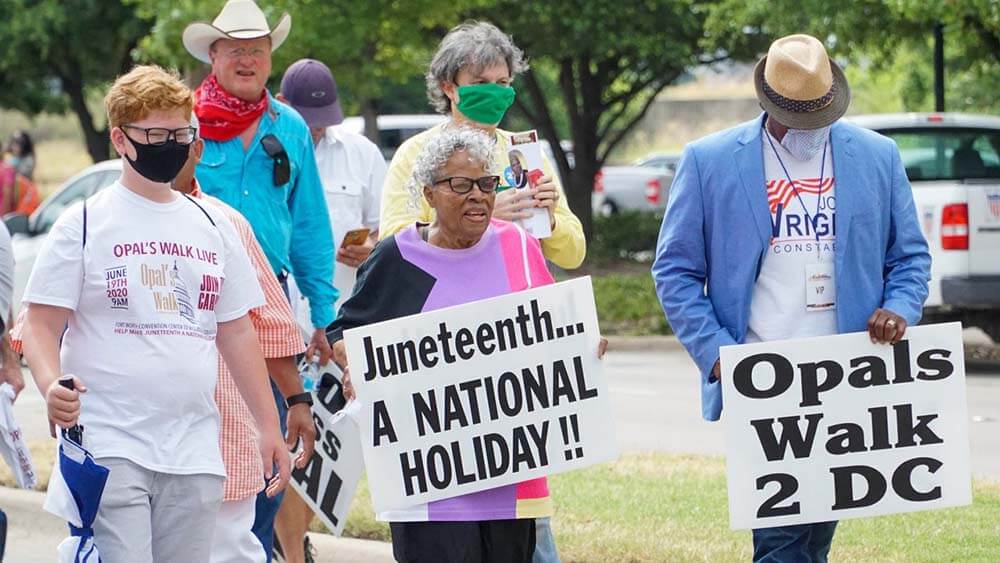 In 2016, Opal Lee, an activist, former educator, and member of the National Juneteenth Observance Foundation, began thinking that she hadn’t done enough toward the foundation’s campaign go make Juneteenth a national holiday. So Lee, who was 89 at the time, decided to walk from her home in Fort Worth, Texas, to Washington, D.C. to spotlight the cause. She figured, Lee said on a webinar hosted last June by the Harvard T.H. Chan School of Public Health, “if a little old lady in tennis shoes is walking to D.C., people would take note.”

And they did — more than 1.6 million people signed an online petition Lee started and then Lee was invited to speak all over the U.S. Last year, when President Joe Biden signed legislation making June 19 a federal holiday, he invited Lee, whom he called “the grandmother of Juneteenth,” to be at his side.

On June 18, the 95-year-old Lee will lead a two-and-a-half mile walk from Evans Avenue Plaza in Fort Worth, the distance symbolizing the two and a half years that it took for enslaved people in Texas to learn that the 1863 Emancipation Proclamation had ended slavery. Evans Avenue Plaza, where the walk will begin, holds nearly three-dozen plaques commemorating Fort Worth’s Black pioneers and early entrepreneurs and is adjacent to the planned site for a National Juneteenth Museum. People in Fort Worth march in 2021 to celebrate Juneteenth, which is now a federal holiday.

Lee, a longtime community advocate, has worked toward the national observance of Juneteenth for more than four decades, she said. “Sometime the long haul is long,” she said during an online interview for Creative Mornings Fort Worth in 2021. The interview was conducted at the five-acre Opal’s Farm, a project of the Fort Worth Community Food Bank, where Lee is a past board chair. “If you have a passion and you know it’s right, you need to go for it. There will be obstacles, but you are never, ever, ever to give up.”

In the past year, 95-year-old Lee has served as a speaker for numerous events, including at a general session at SHRM Annual Conference & Expo 2021 last September in Las Vegas, and in May at Licensing Expo 2022, also in Las Vegas, where she spoke about leadership and social impact.

Getting official recognition for Juneteenth makes her feel “joyful and humble, knowing this is one step in a long step of getting some things done,” Lee told interviewer Vivian Carrasco during the Creative Mornings event.

“So many people have embraced Juneteenth, and the freedom that we all should have. And, of course, people aren’t willing to accept that we aren’t free if we’ve got homelessness and joblessness, and the schools aren’t quite telling the truth about our past. [We have] a health-care system where some can get what they need and others can’t, and a criminal-justice system that needs, in my opinion, overhauled. Climate change — all these things need to be addressed.

“And I think we need to take them one at a time. I don’t see myself being here when they are all attended to. But I hope we will start with education. Maybe we can teach the younger people, who are going to be the ones to get up over the hump.”