Growing up in Victoria, British Columbia, Zena Phillips, CMP, CPCE, scored her ﬁrst summer job at age 14 — in catering. She learned early on that success was about more than just serving food. “There are no silos in catering,” said Phillips, director of catering and events at Conrad New York. Phillips would know: In addition to 20-plus years of experience in hotels, events, and catering, she’s a collaborator on The Professional Reference Guide for the Catering and Event Industry, the 2011 textbook for the Certiﬁed Professional in Catering and Events (CPCE) exam and credential — the industry’s most coveted initials.

After graduating from the University of Toronto, Phillips began working for Maple Leafs Sports & Entertainment — which owns the Toronto Maple Leafs hockey team — eventually becoming the organization’s catering manager. She has spent the last 12 years with Hilton Hotels & Resorts, working in Toronto and South Florida before a stint at the Waldorf Astoria in New York City and, ﬁnally, Conrad New York. Phillips ﬂies home frequently to Miami, where her husband, a meteorologist, lives with their daughter. Even so, she said, “I couldn’t imagine doing anything else.”

How did your job with the Maple Leafs lead you into catering?

At the time, the Platinum Club [at Toronto’s Air Canada Centre, where the Maple Leafs play,] was this beautiful venue and the top restaurant in a sporting arena in all of North America. [Maple Leafs Sports & Entertainment] decided to spin off a catering operation, but they were a sports-entertainment company, so that wasn’t really their forte. Three of us had to establish the catering and events department — what would it look like, what kind of systems were we going to use? We decided how to structure our menus and who we would target. To be able to combine my interest and passion for sports with something that I felt I was naturally meant to do, catering and events, was the best of both worlds. I was there for three years.

Then I went down to Florida on vacation one year, and didn’t want to go back to the cold. I said to myself, why on earth don’t I try and live here instead of freezing-cold Toronto? I started working for Hilton Toronto, so that they could sponsor me to move to the United States. 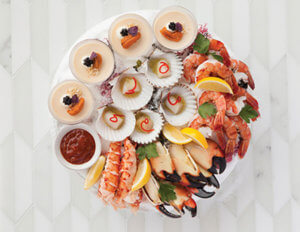 Can you speak to the role that F&B plays in successful events, both in general and at Conrad New York?

We have to make sure that we identify a client’s value proposition. We don’t want to just be saying, “We have these menus, and you can choose from them,” and that’s basically it. It’s got to be more of an experience. If the food is meant to blend in the background, then our food blends into the background. But if our food can play a part in making attendees happy, or for clients to entertain their top customers, we need to customize the experience to suit those needs.

The Conrad has a reputation for excellent food and beverage in its public-facing restaurants. How does the catering department mesh with that?

We actually partner with [chef] Danny Meyer’s Union Square Events, and we’re so fortunate, because we’re their only hotel partner. To have the power of his brand and his name behind what we do helps us tremendously, because it’s deﬁnitely more of a restaurant experience versus the typical chicken that you would expect at a banquet. It’s more elevated. Our menus are seasonal, and we work on them a year in advance, and [the food] is coming from [Meyer’s] kitchen at Union Square Events. It’s not actually made here in the Conrad.

Tell us about your involvement with The Professional Reference Guide for the Catering and Event Industry.

[The textbook] was an initiative at NACE, the National Association for Catering and Events. I’ve been a part of NACE in a leadership role for about 10 years. They had a designation, CPCE, Certiﬁed Professional in Catering and Events, and they decided that they wanted to put together their own reference for the industry that would be relevant for catering and events professionals. The designation had been around for a couple of years, but there wasn’t really a text that suited the needs of the exam and then provided more context. I have my CMP certiﬁcation, but that’s very speciﬁc to meeting planners. There are other designations, too, but there really wasn’t a good in-between for a catering and event professional. [The CPCE] is deﬁnitely more food-focused.

When [NACE] put out the word for a task force to work on this textbook, I volunteered right away. I was on the initial committee and assisted with writing the content. We spent a year working on this textbook, and it was designed to complement the exam for the designation. In order to achieve the designation, this is really the book that you need to study inside and out.

Why does the textbook go deep on so many areas other than food — such as contracts and human resources?

It’s not really enough to skim over, for instance, human resources for catering and events. If you’re an entrepreneur, let’s say, and you’re opening up a cater-ing business, and you really don’t know those ﬁne details about HR speciﬁcally for catering and events — we wanted to make sure we addressed points like that. We wanted the book to appeal to a broad audience, whether you were an entrepreneur, or you worked for a mom-and-pop shop, or you worked for a large corporation. All of those perspectives were captured.

What’s your best advice for a hospitality or catering student as they pursue their career?
Be ﬂexible. I mentor students who are graduating, and I think it’s wonderful that students these days are so focused and have an end goal in mind. I can appreciate that. But really — the more experience, the better. If I didn’t have a background in operations, and did things here and there in the banquet and food-and-beverage operations world, I would not be as knowledge-able or as successful in my role now. Especially in a hotel environment, or a catering and event environment, it’s important to understand all sides. It’s not just sales, and it’s not just operations. They work very much hand in hand.

What developments in presentation or service do you see trending over the next few years?

Presentation has evolved so much — it’s really become more understated. A few years back, in banquet operations, it would be important to theme the entire buffet. Now, we’re really letting food speak for itself. It’s not, “you can either dine in a restaurant, or you can dine in a banquet space.” It’s more about putting those two together and still having an elevated experience in a banquet setting. You don’t necessarily have to go to a ﬁne-dining restaurant to do that anymore.

So, what’s the last thing you ate?

[Laughs.] I just came back from a lunch at Eataly, where we had fresh burrata and octopus, a beet and mint salad, and fresh pasta. That was my last meal, about half an hour ago.