From the outside, the barrel room at the Gallo of Sonoma winery looks like an enormous bunker. Inside, it’s expansive, dim, and cool, with thousands of barrels of wine extending into the middle distance. About three years ago, I walked into the space as part of a corporate group and took a seat at the edge of the room, at a table topped with unlabeled bottles of red wine. Winery staff members led us through a tasting of each varietal — from zinfandel to cabernet sauvignon — before encouraging us to mix our own blends, which soon had us jibing and laughing. Eventually, these bottles were corked and labeled, so we could take them home.

This team-building exercise at the massive Northern California winery was an offbeat experience designed for private groups — but it’s no longer a rare one. The trend of structuring meetings around wine and culinary experiences is in full bloom, spurred in part by the constant drive for novel gatherings. While private events in wine cellars aren’t necessarily cutting-edge — the “hidden” wine cellar at the 21 Club in New York City has been an exclusive meeting space since the 1920s — they’re evolving in more polished and imaginative ways. Bruce Mangual, director of fabulous (his self-chosen title) at The Ashton Hotel in Fort Worth, Texas, said that the property’s wine-cellar meeting space is booked two or three times a week, at least. Like many hotels, The Ashton has a handful of conference rooms, but several years ago began holding more unique, intimate meetings and dinners in its cellar, whose primary purpose is still to store the hotel’s collection of wine. “Ours is a working wine cellar,” Mangual said, “so the possibility of someone popping in there to grab wine during an event makes it fun.” Those bottles are often bold cabernet sauvignons, as befits a place where steak dinners rule.

With stone walls, pressed-tin ceilings, and a sultry ambience, the wine cellar lends gravitas to corporate gatherings, such as a board meeting that Berkshire Hathaway President and CEO Warren Buffett held there in 2009. An oblong dining table fills the space, Mangual said, but it can be removed and replaced with cocktail tables or other room sets for up to 22 people. Meetings are sometimes hybrid in style, segueing from a presentation projected onto a large screen to a dinner or tasting. “We get a lot of business from the financial, pharmaceuticals, and medical-device sectors,” Mangual said.

Wine cellars such as The Ashton’s can exude a cloistered vibe that encourages bonding. Paige Schleicher, director of operations at Fort Worth Technologies, held a dinner in the wine cellar for 16 people this past February to mark her promotion to partner. “It was really important to us to find a small, intimate setting with a certain ambience to commemorate the significance of the event,” Schleicher said. “[The cellar] helped us convey an exclusivity to our event and kept the experience intimate. We were all able to share the things that made us proud to contribute to our company, as well as openly discuss future plans.”

For executive teams, that sense of privacy can be golden — which helps explain why every year, more hotels and restaurants are spinning unbooked time and negative space in their wine cellars into private events. The Amway Grand Plaza Hotel in Grand Rapids, Michigan, has a wine room that seats 20 people for events that pair casual bites with wines from Wolfgang Puck’s private label. Likewise, the bottle-lined wine room inside the Atrio Restaurant at the Conrad Miami Hotel seats up to 10 people, and many European properties, such as Paris’ Hotel Plaza Athénée and Prague’s Mandarin Oriental, have wine rooms for exclusive events. 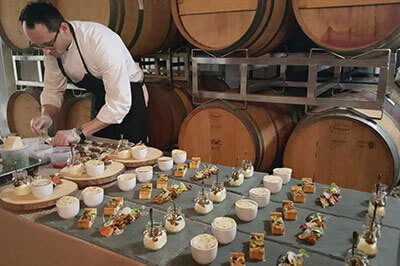 The barrel room at Ravines Wine Cellars — in a turn-of-the-century barn — is a unique setting for intimate meetings.

For the most part, these are elegant, glossy spaces. Another breed of wine-centric locale — cellars or aging rooms such as the one at Gallo, or the barrel room at Ravines Wine Cellars in the Finger Lakes region of upstate New York — has more rustic edges, but similar technical capabilities.

Ravines owners Lisa and Morten Hallgren use their 85-foot-long barrel-aging room for meetings and meals for up to 75 people. “We have a beautiful turn-of-the-century barn,” Lisa Hallgren said, “and a table that extends the whole length of the space.” Barrels of riesling and cabernet franc age an arm’s length away from guests. “You can smell the wine in the barrels,” Hallgren said — lending another layer of atmosphere to meetings and meals, as well as team-building activities such as blending wine or stirring lees (deposits of dead or residual yeast).

Groups ranging from tourism boards to banks to the winery’s sales distributor have used the space at Ravines, whose team can ferry in projectors and screens for clients’ more straightforward business gatherings — even those that might end with a culinary component, such as a tasting overseen by chefs and accompanied by wine flights. “People in meetings need to pay attention, so we might have lighter meals that are still flavorful,” Hallgren said. “The chef sources everything from some of the farms around us. We’re so lucky we get all of this amazing produce, cheese, and ethically raised meat.”

When it comes to scale, Gallo and Ravines may dwell on opposite sides of the spectrum, but both recognize the magnetism that winemaking holds for people — even if it can sometimes be challenging for staff. “I get a lot of flack from the product team,” Hallgren said, laughing, “that ‘this is not a party house.’”