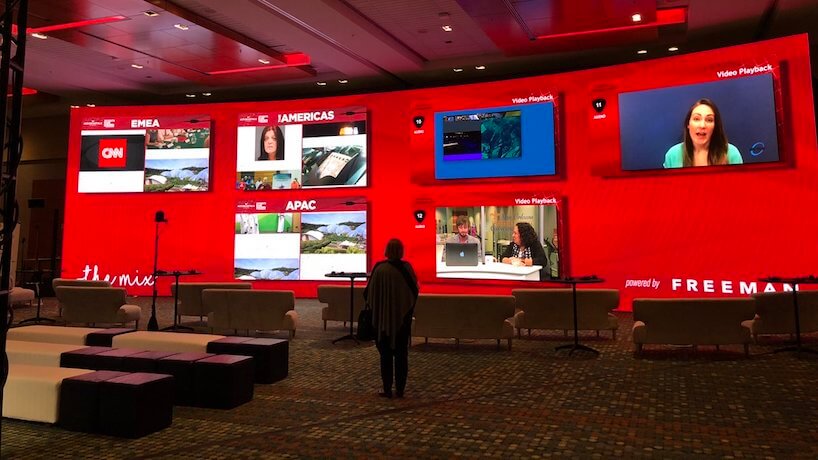 When participants at Convening Leaders 2018 arrived in The Future of Face2Face, an area dedicated to emerging technologies and trends that will shape in-person engagement, their eyes most likely fixated on The Mix. Measuring 65 feet long and 18 feet high, the massive wall of HD screens was powered by Freeman, and it was one of the most talked-about tech elements at the four-day event in Nashville. PCMA caught up with John Kennedy, executive vice president and COO of Freeman, to get a sense of how the concept came to life, the technical details that powered it, and opportunities for scaling the screen down to fit smaller spaces — and smaller budgets.

What inspired the initial concept of The Mix? How does this oversized media display fit into the future of face-to-face?

About eight years ago, we started the concept of streaming concurrent sessions to a central area so that attendees could “channel surf” sessions while still networking with their peers. Since then, the concept has evolved and grown over the years to include social media, schedules, second-screen audience-interaction technology, and playback of previous sessions. The flexibility and scalability has also evolved. At a recent event for a leading tech company, we had a 28-foot-by-175-foot screen in a lounge the size of an exhibit hall. Technology will continue to play a bigger role in the future of face-to-face as interactive technologies, augmented-, virtual-, and mixed-reality evolve and become the norm. The Mix is just one application of technology that gives attendees the chance to gather, network, and still experience what is going on everywhere in the venue and potentially elsewhere. Some event organizers may think about engagement as an activity that happens in specific session rooms, but this concept seems to underscore the need to give attendees additional control to learn whenever and wherever they desire. What’s your perspective on how extending the learning outside the session room is a critical component for big conferences?

In today’s technology environment, everyone has become used to accessing whatever they are looking for instantly. Creating a hybrid model where attendees can access content by viewing a presentation in-person, gather in a comfortable central area where they can view and interact, or view from another country will be critical in the future. Polling, Q&A, and other interactive and engaging activities can now all be done remotely with great effectiveness.

Cool environment for learning at #pcmacl in Nashville! Future of meetings... pic.twitter.com/ZUZzQ90VhK

Interesting presentation approach. Multiple presentations. Inside one ballroom. Attendees have headsets they can tune to a particular presenter. #PCMACL pic.twitter.com/Vj1WvX9OLY

Who decided which sessions might be most popular with the audience?

PCMA determined the content. All the concurrent sessions were broadcast live, and the organization’s education and events teams decided which sessions would be most beneficial to replay.

In terms of the technical audio details, how many headsets were available in the room? How did the mobile app work to give attendees the ability to use their own phones to listen?

We had 500 infrared headsets available in the room. We also wanted to show the latest technology that allows broadcasting multiple channels of audio over a Wi-Fi network to mobile phones, which eliminates the need and cost of deploying headsets and receivers. The technology for this is based on a hardware-based station that takes in all the audio channels and connects to a local Wi-Fi network. This network can be an existing one in the venue, or depending on bandwidth availability and needs, you can deploy your own local Wi-Fi network. Users just download the app and connect to the Wi-Fi network. The app interface can be branded with your show look and feel. On the backend of the technical details, can you walk through the specs of capturing all the content from each session room?

Each room that was streaming content required a streaming computer. Our proprietary systems allow for you to stream and record at the same time. They also allow you to combine sources like we did at Convening Leaders where we had a camera in each room. So, the camera signal and the presentations that were being projected in the room were both fed into the streaming device, which created the picture-in-picture that allowed you to see both the camera shot and the graphics. All of the streaming computers were controlled at the control center by The Mix, and all of the signals were sent to The Mix via the building’s existing network infrastructure. In The Mix control area, we had a receiving computer for each streaming computer that had digital signage software running, which creates the overlay for each session showing the session name, room, and audio channel information. This takes about a day to set up and test. Can organizers leverage this display area as a sponsorship opportunity?

The potential for sponsorship on this type of installation is huge. The screen is just a canvas with unlimited possibilities with regards to what goes where. So you can create separate areas with sponsorship graphics by area, or you can sell video add space to run commercials or any mixture of video and still opportunities. The Mix was a huge screen with loads of programming options. How can event organizers with smaller audiences and smaller agendas scale this concept for their own attendees?

The Mix was a 65-foot-by-18-foot LED screen, which was made up of 400 LED tiles. The concept can be scaled to any size or display technology. The original concept eight years ago was simply four LCD monitors showing four concurrent sessions. You can use a series of monitors, projection, or LED to scale and customize to your meeting size and requirements. Interested in more insights on the future of digital engagement from Freeman? Check out this interview with Richard Maranville, the company’s Chief Digital Officer.