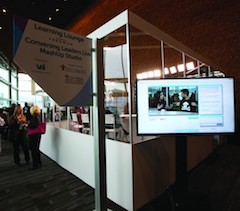 While thousands of business-event professionals attended PCMA Convening Leaders 2017 in person at the Austin Convention Center in January, an impressive number also participated in Convening Leaders LIVE, the online program produced by PCMA’s Digital Experience Institute (DEI) with partners INXPO, Freeman, and Sonic Foundry. More than 1,400 people from 24 countries logged on — a 6-percent increase from Convening Leaders 2016 — with 46 percent of them spending more than six hours online.

What were the biggest challenges with Convening Leaders LIVE 2017?

We did have a technical glitch during the general session on Tuesday — Jeremy Rifkin — where the packets, when we were doing the encoding, weren’t leaving the center properly. We were experiencing buffering. This was our biggest technical challenge this year. We had a backup plan. We were Facebook Live–ing this session, so we directed people that if they wanted to continue immediately, they could go to Facebook Live. We shared an on-demand version immediately to everybody that was in that session, and then we also included it in the rebroadcast. We always test, test, and test again, but that was just something that was beyond our control.

One other thing was, this year there was a lot more white space built into the face-to-face, which gave us bigger breaks in between the sessions. We saw it as an opportunity to increase our Mash-Up Studio programming. We actually did 58 interviews this year. It’s like live TV. Most of them were five-minute interviews, usually with VIPs, PCMA leadership, key speakers. Their schedules are always very tight and sometimes can be hard to get there on time. We had to punt a little bit. We had to flip a couple of the interviews around. We prepared for this, so we were able to do that. How did the physical space for the Mash-Up Studio at the convention center work out?

We were in a highly visible location, which is great because it gave the scene of the action happening behind us. It was a big artery for where people were coming through, going from the Main Stage to lunch and all the different sessions. We design it to be trans-parent, because we want it to be a learning moment both for those that are online and those that are in attendance, so that they can come and watch. We have learning moments posted around the studio, so that [in-person attendees] can see what the online experience was. The location worked out great. We were close to windows, so we had some extra natural light, which is always a plus.

How has Convening Leaders LIVE evolved over the years?

The first year it was really focused on the technical, and we just livestreamed six sessions and that was it. Every year as we go on, we truly develop a unique program for the online audience. Engagement has probably been the biggest focus that we keep looking at — how we can keep extending that and evolving that and changing that each year.