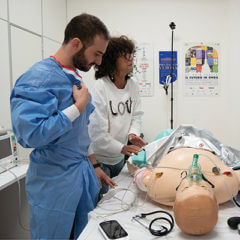 A boat capsizes and dozens of refugees are tossed into the sea. While this scenario tragically plays out all too often in real life around the tiny Sicilian island of Lampedusa, the emergency situation has been re-enacted at a simulation during a medical event — the SIAARTI (Italian Society for Anesthesia, Analgesia, Resuscitation and Intensive Care) Academy — that has taken place there for the past two years. The simulation trains young physicians while the overall event benefits the destination on a number of fronts.

Over the past 20 years, an estimated 400,000 people have crossed the ocean to get to Lampedusa — a speck in the Mediterranean nestled between Sicily, Malta, and Tunisia — and at least 15,000 have died trying. Frequently in the news amid unfolding at-sea rescues of African immigrants trying to reach Europe, this Sicilian island has been the focus of several documentaries on Europe’s refugee crisis, one that aired in June on cable television station HBO, and an award-winning 2016 Italian documentary, “Fire at Sea.” The main character in that film is a local physician, Dr. Pietro Bartolo, who treats arriving migrants.

His starring role underscores how Lampedusa’s refugee crisis is also a medical crisis. Both crises converged as part of the six-day SIAARTI Academy. Beyond serving as the event site, the island’s place in the world as a migrant port provided a one-of-a-kind training opportunity for the 130 physician attendees from 39 university graduate programs.

Once they landed there this May for the second edition of the Academy in Lampedusa, they became actors in an unfolding drama. An outdoor maxi simulation featured a sinking boat with migrant passengers — in addition to a simultaneous serious traffic accident on land nearby. Gaia Santoro It was ‘an incredible experience both in terms of scientific knowledge and human experience.’

Why two disasters at once? “In real life, unfortunately, often the numbers of doctors in the hospital is lower than [what’s] needed for emergency situations,” said Gaia Santoro, project manager congress division for AIM Group, which organized the event. The participants therefore were faced with how to cope with dual emergencies. The maxi simulation involved boats, helicopters, and the coordinated efforts of the Italian Coast Guard, the Order of Malta’s Italian Relief Corps, the Italian Civil Protection Department, and the country’s medical emergency service. In total, 300 people participated in the simulation. The exercise was invaluable in allowing doctors to test themselves and put what they had learned into practice, Santoro said. Such a simulation requires them to switch, she said, “from an abstract clinical theory to the empathy of a real-life situation.”

In the end, SIAARTI Academy provided “an incredible experience both in terms of scientific knowledge and human experience,” Santoro said. “Thanks to the setting, the lifelike experience, the classes, and hands-on sessions attended, the young doctors were really involved in their roles [as victims and rescuers] and had the possibility to intensively learn.”

The number of physicians who participated in 2018 was double the number of attendees at the first SIAARTI Academy on Lampedusa in 2017, which AIM Group also staged. The inaugural event earned several international awards, including the IAPCO Collaboration Award. “We were really pleased by the recognition,” Santoro said. “After the event we realized how innovative and original it was and we decided to share this experience so other scientific associations can consider disruptive formats. Making this event well-known to other international events professionals is another legacy for the destination.” SIAARTI’s maxi simulation featured a sinking board full of refugees.

Legacy was, in fact, among the reasons Lampedusa was chosen as the site for the gathering of doctors, who are completing specializations in anesthesia, intensive care, pain, and resuscitation. With the successful execution of the SIAARTI Academy, AIM Group hoped to prove that Lampedusa — a destination usually not considered for such congresses — was capable of hosting business events and educational activities, Santoro said

SIAARTI Academy left behind some assets that would help in this effort. Since there isn’t “a real congress center on the island,” she said, AIM Group created one inside Lampedusa’s airport, equipping rooms with technology and furniture that will remain for future meeting use.

In addition, the know-how and expertise the destination gained in hosting the two consecutive medical meetings will be useful in executing future events. “We enabled some local facilities and companies — such as hotels, restaurants, and transfer companies — to adapt to the needs of the meeting industry,” Santoro said. While the hope is that the island will be in a better position to host other medical events as a result of the Academy’s example, she acknowledged that emulating a similarly highly orchestrated simulation might be unlikely. That part of the event is specifically linked to SIAARTI’s educational objectives: The society’s focus is finding  innovative training formats for future doctors, she said, which may not translate to other scientific associations.

Beyond paving the way for future events, the Academy also contributed to the island’s collective first-responder community that participated in the maritime crisis simulation, by reinforcing best practices for the future.

“Lampedusa is still involved in the migrant crisis, even if the immigration host center which caused some problems in the past was closed some months ago,” Santoro said. “Migrants continue sometimes to land there and there is still a crisis to manage.” SIAARTI and AIM Group, she added, “took a bold step by choosing a small island in the middle of the Mediterranean Sea for such a challenging format. As the symbol of Europe’s growing migrant crisis and on the frontline of providing assistance and handling emergencies, Lampedusa was the most suitable place that could show the impact [related to] the issues of emergency aid in the fields of anesthesia and resuscitation.”

But Santoro also takes a wider view of the island’s potential. “Lampedusa is not only related to migrants,” she said. Its sunny beaches and permanent population of about 6,000 make it an appealing destination for tourists — and as the Academy demonstrated, she said, for the meetings industry as a whole.

It’s uncertain if AIM Group will bring SIAARTI Academy back to Lampedusa a third time. “We haven’t decided yet,” Santoro said. “We’re talking about the opportunity to imagine a new scenario.” A mountain setting is under consideration.

No matter how high delegates may summit at the next SIAARTI Academy, it will be difficult to match the level of emotional engagement they experienced in Lampedusa. “Feelings were very high during the simulation,” she said, but they were equally high when Dr. Bartolo — the physician featured in the “Fire at Sea” documentary — gave his testimony. “He is responsible for the local outpatient clinic and the one who has provided medical care to all refugees and migrants. The moving character of the stories and photos of his daily reality shook many participants.”

Santoro thinks that kind of emotional involvement, regardless of the nature of an event, is a must, because it helps keep attention high and facilitates learning. “This event,” she said, “is an example of how it is worthy to break habits, to innovate, and to dare to experiment.”