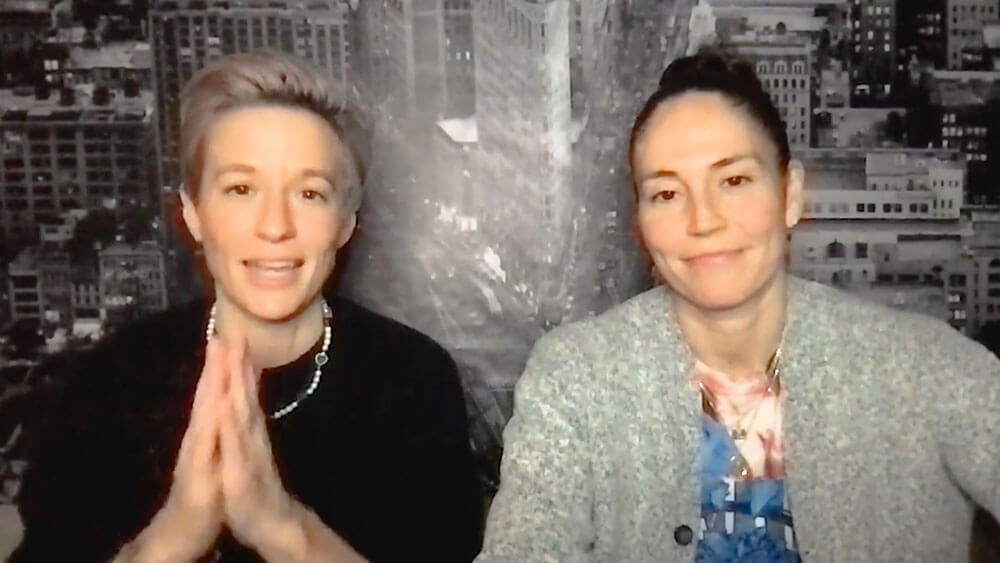 U.S. Olympians and Seattle residents Megan Rapinoe (left) and Sue Bird address attendees at PCMA Convening Leaders 2021. The couple shared stories of the work they, and Seattle, do to support inclusivity.

Two Seattle icons brought a message of inclusion and diversity to PCMA Convening Leaders 2021. Professional soccer player Megan Rapinoe and her fiancé, professional basketball player Sue Bird, delivered the Closing Keynote from their kitchen, highlighting Seattle’s “All Are Welcome” environment and the city’s intentionality to celebrate strong women and create a community where they can lead.

Seattle is consistently ranked as a Top 10 best city for women entrepreneurs and is home to the highest percentage of women-owned businesses in the U.S. (40 percent). Visit Seattle’s SEAforSHE initiative is all about spotlighting Seattle’s successful story of inclusion for women. It is just one of several programs that promote diversity and inclusion across business events in Seattle. Another is the PCMA Ascent program, of which Visit Seattle is a founding partner. PCMA Ascent was created to amplify messages of equality and conversations about social justice. The goal of the initiative: to make the business event industry a model for diversity and inclusion.

“We have a welcoming destination that inspires critical work being done on social justice, equity for women, LGBTQ+ community, and leading with purpose,” said Kelly Saling, vice president of convention sales and services for Visit Seattle. “Seattle is a city of constant advancement and transformation — a place where people feel inspired to be themselves, and where pioneering spirits come in many forms.”

Rapinoe and Bird have served as as ambassadors on the Visit Seattle web site, in publications, and through social media over the years. Rapinoe has been showcased on SEAforSHE to highlight strong women in Seattle.

“We both realize as we travel around the county and around the world, how safe we feel here [in Seattle],” Rapinoe said during the discussion, “how progressive it can be here and how open it is here and how comfortable we feel as gay women.”

As co-captain of the U.S. Women’s National Soccer Team, Rapinoe is known as one of the team’s most technical players and is a vocal leader on and off the pitch. She is an advocate for equality for all and has been able to intersect her passion for humanity and authenticity. She is currently prepping with her teammates for the 2021 Tokyo Olympics this summer. Bird, who is regarded as the world’s premier point guard in women’s basketball, is known for being selfless, driven, encouraging, funny, and smart. Off the court, she is a basketball analyst for ESPN, a front-office executive with the Denver Nuggets and spends time advocating for equality, LGBTQ+ rights, Black Lives Matter, universal health and wellness, and expanding opportunities for girls.

“The Seattle Foundation now has a fund called the Black Future Co-op Fund,” Bird announced in their session, wondering if she was breaking news. “When you look at the list of people who have already given money and support to this, it just tells you everything you need to know about Seattle. … Everyone in our city is always going to be involved in these things. It’s wonderful living here for that reason.”

In Seattle, Pride isn’t just a month. The city celebrates its LGBTQ+ community 365 days of the year, working to shift the country’s narrative one story at a time at wesealove.com. Visit Seattle invites others to join them in supporting this effort, “Because where others see hate, #weSEAlove.”

Seattle is eager to welcome everyone in the very near future. Please call (206) 331-1982 or e-mail ksaling@visitseattle.org.