The Milwaukee Brewers face the San Francisco Giants in a Cactus League game at the Maryvale Baseball Park in Phoenix.

Each year, as February comes to a close, approximately 1.9 million fans begin their trek to the Arizona desert to catch the first glimpse of America’s Pastime — spring training for the professional baseball players in the Cactus League. When Visit Phoenix sent me an invitation for a late February media trip, after a season of bone-chilling Arctic temperatures across much of the U.S., I needed a reminder of what the great outdoors feels like without four layers of clothes and a ski mask. I couldn’t wait to pack my bags, ditch my winter coat, and head to the Valley of the Sun for a much-needed first taste of spring and to discover what this destination has in store for groups.

When I landed at Phoenix Sky Harbor International, I was tempted to stick around. The second phase of a $590-million modernization project in Terminal 3 — now named the John S. McCain III Terminal — had just been completed. The aroma of freshly baking dough and bubbling tomato sauce from The Parlor Pizzeria, named Arizona’s No.1 pizza by the Food Network, wafted through the terminal, and golden pint glasses of Juicy Jack IPA from the SanTan Brewing Company beckoned. But I had no time to stop for a slice or a flight — I had a packed itinerary ahead. The Duce, a combination warehouse/patio, can accommodate approximately 650 guests inside and around 1,000 with the neighboring parking lot.

After a 15-minute Uber ride, I arrived at my host venue for the evening: the Sheraton Grand Phoenix, a 1,000-room property next to the Phoenix Convention Center. The short trip from the airport gave me a glimpse of how the city’s downtown has been exploding with growth. Over the past six years, more than $4 billion has been invested in office space, retail, restaurants, educational facilities, and convention space, and when Marriott International purchased the Sheraton Grand, it added $255 million to the investment total.

The real estate acquisition is a rarity for the world’s largest hotel company, which typically operates as a manager. However, it seems that Marriott has big plans for the property. After the purchase, Marriott President and CEO Arne Sorenson said it will “provide a living and breathing showcase of our new vision for the Sheraton brand,” and when complete, the renovations — expected to begin this year — will “showcase the brand’s new focus on services and design that enable socialization, productivity, and personalization.” The property’s more than 100,000 square feet of meeting space is already a major attraction for event organizers — the property was preparing to host the International Women’s Summit the following week.

While I was in town to learn more about developments like these designed for business events, I also wanted to soak up the warmth and explore some off-the-beaten-path Phoenix venues — and Billy Oxford was just the man for the job. The president of Arizona Pedal Cab, Oxford is a mix between jolly Santa and laid-back Jerry Garcia — a wizard beard extends seven inches past his chin, blowing in the wind with each turn, and a pair of spectacles gives him the air of a Phoenix philosopher. He has been sharing his encyclopedic knowledge of all things Phoenix with passengers since 1993, and all those miles mean that he knows something about everything — including how Phoenix embraces events.

We cycled past The Japanese Friendship Garden, which Oxford called “a beautiful place where attendees can really get in touch with a sense of calm and serenity.” The Herberger Theater Center, he recalled, was the site where WordPress hosted attendees on the lawn, “and it looked stunning at night.” MonOrchid features “some amazing displays in the art gallery, and the event space probably fits 400 attendees.” The Duce, a warehouse/patio combo that can accommodate approximately 650 guests inside and upwards of 1,000 with the neighboring parking lot, was where he had “just picked up a bunch of attendees who really knew how to party from a Milwaukee Tools event.” At every corner, Oxford had another story of an event hosted there. Billy Oxford, president of Arizona Pedal Cab, shares his knowledge of Phoenix with passengers during their rides.

As the downtown core continues to capture the attention of event organizers and leisure travelers alike, the surrounding Scottsdale area is keeping up with the pace and giving visitors new reasons to escape the city lights. After a busy second day that included catching the first four innings of the Milwaukee Brewers-San Francisco Giants match-up and exploring the Heard Museum’s collection of American Indian art, my brain and body were ready for a break.

Our Visit Phoenix hosts had made plans for just that. A 25-minute shuttle ride — this time via gas-powered sprinter van instead of Oxford’s pedals — transported us to the base of Camelback Mountain and the front door of The Phoenician, a Luxury Collection Resort.

We weren’t there for a stay in one of the property’s 645 guest rooms or suites, but rather to enjoy the most relaxing piece of its recently completed, three-year, $90-million renovation: the new Phoenician Spa. After a 50-minute artisan massage, we capped off the evening with dinner at Buck & Rider, a five-minute drive from the massage table. Seafood lovers who may be skeptical of ordering fish in the desert, take note: The restaurant flies in fresh catches every day. And the hotspot will please any beverage palate and budget at nearly any time of day: Happy hour lasts from 11:30 a.m. to 7 p.m.

Our host for the rest of the trip was true Arizona royalty: the Fairmont Scottsdale Princess, site of the PGA’s annual Phoenix Waste Management Open. After checking in that night, I made a beeline for my room. Checking out the property’s five on-site bars and restaurants, six heated swimming pools, and 316,000 square feet of meeting space would have to wait — I had a 5 a.m. wake-up call for my first-ever hot air balloon ride. Technology has made it easy and efficient to zoom from here to there. Robots drive cars, trains move at 200 miles per hour, passengers can scan their faces to board planes. But the hot air balloon experience remains refreshingly simple and relaxed. The team at Rainbow Ryders drove our van loaded with sunrise-seeking tourists to a flat spot in the desert, blew up the balloon in approximately seven minutes, and lifted off into the Arizona sky to reach a height of nearly 7,000 feet above sea level.

Patrick Stevens, our pilot and a lifetime Phoenix resident, pointed out the landmarks below and shared stories of Phoenix’s transformation over the past decade as the sun burst through the clouds. Much of his perspective centered on the metropolitan area’s addition of more than 500,000 residents since 2010, but plenty of temporary guests are fueling the hustle-and-bustle of the city, too. From hosting mega-sporting events like the Super Bowl and the NCAA Men’s Final Four (the city will host them again in 2023 and 2024, respectively) to attracting groups such as the American Society for Healthcare Engineering and the American Meteorological Society, Phoenix is a draw for attendees. They’re getting a taste of what distinguishes the city, such as the chocolate bitter-infused bourbon cocktail I sampled at Match, the on-site restaurant at the FOUND:RE Hotel, and the Korean Bulgogi Ribeye sandwich I gobbled down at Breadwinner, a local favorite at a downtown collection of shipping containers called Churchill. They’re the ingredients that make for lasting memories of the city.

As my fellow media fam guests and I were heading home to destinations not quite as sun-soaked as Phoenix — in my case, Chicago’s high was zero degrees on departure day — we felt primed for spring. Until then, I’d have to replay my Phoenix experiences in my mind to keep me warm. The Rainbow Ryders take tourists to heights of almost 7,000 feet above sea level in their hot-air balloons. 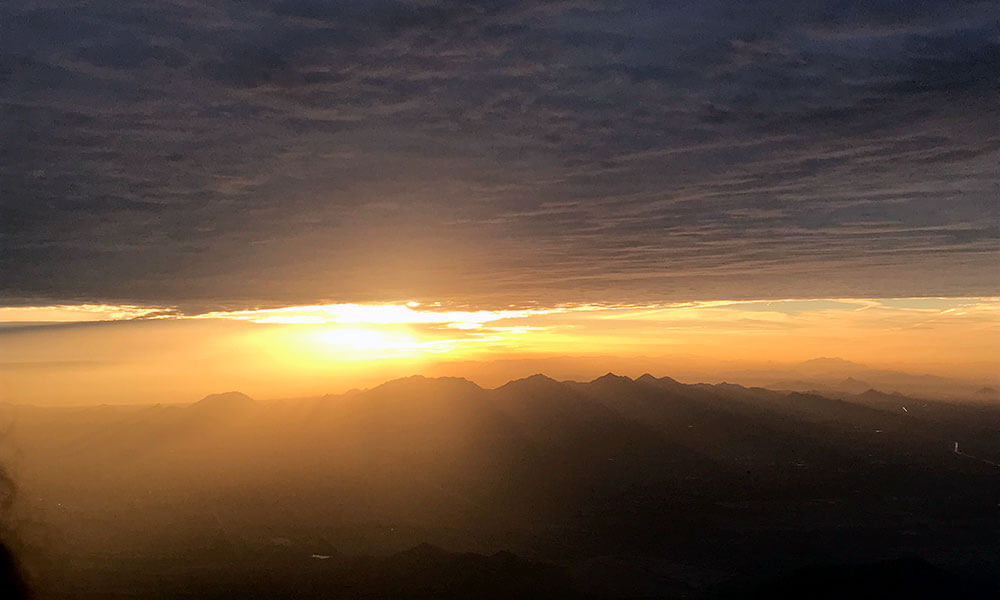 The view from a hot-air balloon includes sunrise from rarely seen angle.