Rebecca Merritt has been working in production “in one form or another,” she said, since she was 19, including event production. What she has loved most about it is “the transformation of space. With event work, you go in and something is completely transformed for four hours or for a day,” she said. “And then it goes away — like an ephemeral bit of magic.”

Merritt was in the thick of things in New York City in March last year, overseeing the design, lighting, AV, flowers, and rentals for upscale events, when overnight, COVID-19 hit, she said, “and the world shut down.”

Merritt said she struggled for a while about what to do. “Whether it’s dinner at a restaurant or a party or a gala,” she said, she missed “walking into spaces where everything is beautiful and the details are attended to. It felt like such a loss that we didn’t have that.” Then her thoughts turned to a second love, flowers, which also “have a short-lived beauty that really transforms a space,” she said. Her production company also serves as a full-service event florist, and Merritt’s passion for flowers is such that she has cruised neighborhoods to check out wholesale flower markets before moving nearby.

Late last year, she founded Zoom & Bloom, where she leads 45-minute virtual flower-arranging workshops for groups. Participants are sent the flowers in advance for the online session and — owing to her years of production experience — they arrive with an eye to detail. For example, she works with a fine artist to line draw the different flowers that go on the care card matching the stickers on the bundles of flowers in the box that is FedExed to participants. And the flowers themselves aren’t standard issue — they’re interesting varietals like a parrot tulip rather than a regular tulip.

“You’re not getting six roses and two hydrangea and some berries,” Merritt said. “You’re getting five different kinds of greenery, textures that you would see, but wouldn’t know what to do with them.” 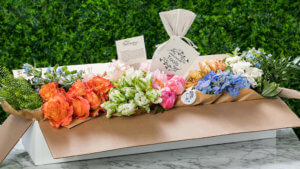 Zoom & Bloom is described as “paint by numbers” for flowers. Participants are sent flowers and tools in advance for the online session.

Participants also receive the tools they’ll need to trim and shape the arrangement and a container with a reusable grid to place the stems. “Everything is pre-prepped, so it’s almost like paint by numbers,” she said, “with flowers.”

One of the things that Merritt said is special about going to an in-person event is “that we’re all having a very similar experience. We’re all in the room together. We’re all seeing what’s on our table. We’re all hopefully in the glow of some candlelight looking 10 years younger.” Zoom & Bloom aims to replicate some of that shared experience. On one of her workshops for women in finance, people in Minnesota who were snowed in Zoomed via a generator, while others were on the call in sunny California. “We were all using the same materials and having the same experience,” she said. “It ties you to each other in a way that something that is not tangible doesn’t. Everyone shows their arrangement and that’s really fun.”

While right now Merritt can’t do her “main love,” which is “transforming event space,” she said that Zoom & Bloom helps people “transform their space, because let’s face it, we’re inside all the time. This gives people a really nice bright spot in their home.”

Plus, people tend to have “a real emotional connection” to flowers, bringing them back to past experiences and places even if they don’t realize it. For Merritt, it’s beach roses. “Two of my favorite scents in the world are salt water and roses,” she said. When she sees and smells Rosa rugosa, it brings her back to the first time she saw them in Martha’s Vineyard, Massachusetts. When she’s in New York City’s flower district and she sees orange blossoms in February when they’re in bloom, it reminds her of growing up in Florida and “driving to go see my grandparents in Atlanta,” she said. “We would always drive through groves and the smell would fill the car.”

With Zoom & Bloom, she said, “you’re grounded by your senses to an experience that you’re having with other people, even though you’re not in the same room with them. And you’re giving them this memory, that for the week that those flowers are sitting on their dining table, they’ll think about who they gathered with to make them. And when they have the vase to use afterwards, they’ll remember where they got it. They’ll also have some knowledge about arranging flowers that they got from the program. It provides a tactile way to feel immersed in a sensory way.

“They’re being given something beautiful and uplifting,” she added, “during what feels like a really bleak time.”