Ever since they rolled onto the culinary scene, food trucks have had an uneven relationship with meeting venues. Where many catering teams and planners see competition, however, Barrie Schwartz sees untapped symbiosis — and last summer, she had the chance to prove it with the backing of one of America’s biggest food producers. “Incorporating innovative local chefs, food trucks, and specialty caterers makes events stand out,” said Schwartz, founder and CEO of My House Social, a New Orleans–based culinary-event-planning company that connects chefs, food trucks, and artisan producers with meetings and events.

When Schwartz said as much during an April 2017 panel at the Women’s Foodservice Forum (WFF) Annual Leadership Development Conference, one of the people sitting in the audience was Wendy Davidson, president of U.S. specialty channels for the Kellogg Company, and a member of WFF’s board. Coincidentally, Davidson was planning an upcoming national sales meeting in Chicago for her team that would highlight culinary trends — and she soon tapped Schwartz to help organize its centerpiece event, an evening meal catered by food trucks.

It was a crafty move. Schwartz’s roots in the artisan culinary community run deep. While she was working as a waitress at the New Orleans restaurant Coquette, she also began having dinner parties at her home. The gatherings grew so popular that Schwartz and her friends transformed them into paid events, bringing in a rotating roster of chefs. 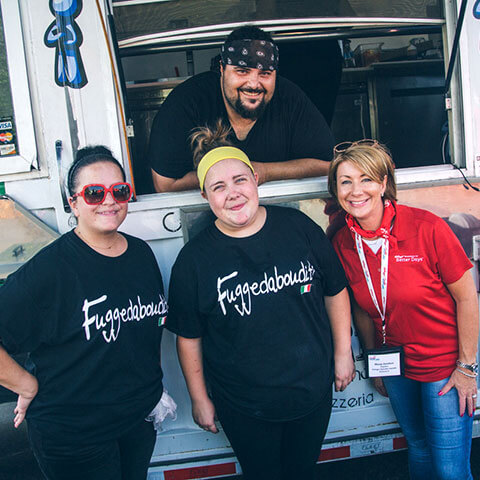 Those dinners, in turn, morphed into My House NOLA — eventually renamed My House Social — a business connecting food trucks and artisan producers with weddings, parties, and corporate events.

Schwartz was excited to work with Kellogg to change up the company’s sales meeting, which until this year had always featured a catered dinner in a hotel. “There’s not many people trying to bridge that gap between culinary and corporate,” said Schwartz, who is part of PCMA’s new class of 20 in Their Twenties honorees. But it wasn’t just uncharted waters for Kellogg. It also marked the first time Schwartz and My House Social planned a corporate event outside of their home state of Louisiana.

The event would be held at the Hilton Chicago/Oak Brook Hills Resort & Conference Center on July 19. With three months to plan, Schwartz had two priorities: researching culinary trends to highlight, and tapping her network of chefs and food trucks. “The theme of the sales meeting was ‘a culinary journey into tomorrow,’” Schwartz said, “and as we talked about different ideas, we narrowed in on fermentation” — along with wood firing, exotic ingredients, and build-your-own dishes, a solidly Millennial concept.

The fact that Schwartz had to draw on food trucks in Chicago rather than New Orleans to execute these ideas wasn’t much of a challenge. “We have a database for food vendors,” she said, “that are doing creative, cool things all over the country.”

My House Social and Kellogg chose four vendors for the dinner: La Cocinita, which serves Latin American street food from trucks in both New Orleans and Chicago; the Yum Dum food truck, which prepares dumplings, rice balls, noodles, and “Baowiches”; The Fat Shallot, which turns out creative sandwiches; and Chicago Pizza Boss for wood-fired pizza. Some of those trucks had dishes that already fit the event’s theme, such as Yum Dum’s “kimcheesy rice balls”; others worked with Schwartz to come up with unique bites.

Although Schwartz didn’t do a site visit beforehand, the Hilton’s catering team sent her a plot map, and together they planned a tented pavilion filled with high-top tables on a grassy part of the property’s golf course. Schwartz arrived on the day of the event, as did the four food trucks, arranging themselves in a square on a parking lot adjacent to the course. Around 5 p.m., Kellogg’s 250 or so attendees spilled into the pavilion, where they were given drinks by the hotel’s catering staff as they milled around the trucks.

Long lines can be the curse of any food-truck event, but Schwartz cleverly avoided that. As a result, grabbing those cheesy rice balls, wood-fired pizza topped with soppressata, build-your-own arepas, and “an unbelievable” Buffalo-chicken slider from The Fat Shallot was a seamless experience — so guests could focus on the local flavor of the foods themselves. “[The event] made people feel like they’re a part of the city they’re in,” Schwartz said, “and allowed them to see different chefs in action.”

For Kellogg, the inaugural food-truck rally was a success — and something Davidson would consider doing again. “It was really fun for our guests to try the different trucks, be outside, and experience a local Chicago culinary experience,” she said. “It was a unique culinary experience that brought flavor and menu innovation to life for our team. From coordinating with locally renowned restaurateurs and food trucks, managing the logistics, and engaging with our team to incorporate key ingredients and brands, Barrie and the team at My House Social were one of the most turnkey and innovative partners we’ve worked with.”

While Schwartz and her team are mostly busy with social events such as weddings, they’re also increasingly branching into the corporate sector. “[The Kellogg dinner] was a big step for us,” Schwartz said. “As a small business, we had never actually done this before — planned an event from out of state, and flown in the day of and worked with new vendors. They trusted me, and I trusted myself, and it was flawless.”

If you plan to organize a food-truck rally, consider this serving advice.