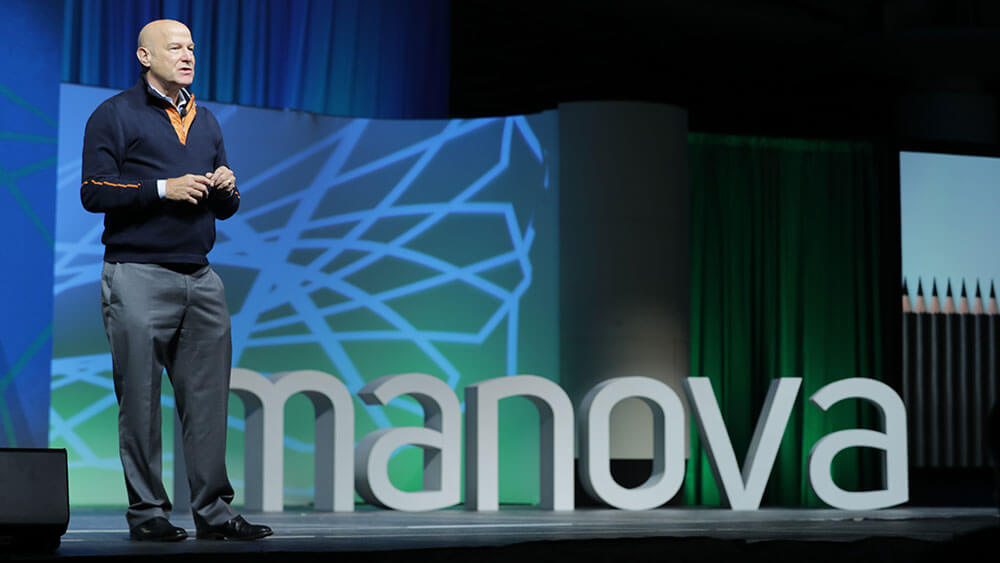 In August 2018, when Mark Addicks was in the midst of planning his first-ever event, the MANOVA Global Health Summit, he was determined to make it a dramatic departure from the typical medical conference. “We want to make health care sexy,” Addicks, the CEO of 2023 Partners and former chief marketing officer at General Mills, told Convene at the time.

Rather than featuring the tried-and-true combination of abstract posters, continuing-education credits, and miles-long corridors of medical-device exhibition booths, Addicks wanted to mold MANOVA — a three-day program at the Minneapolis Convention Center from Oct. 8–10 — more into the shape of CES, SXSW, and the Davos World Economic Forum. He wanted MANOVA to focus less on making health care an issue, he said, “that is confusing and complex and has a lot of angst around it.” Instead, he wanted the event to explore the question of “how do we flip that into the world that it really lives in, which is a world of unbelievable infinite possibilities?”

While that sounds like an exciting way to approach health care, many medical events take a more straightforward, boots-on-the-ground approach, with programming that addresses the “angst” created by the current tangled web of regulations, insurance codes, and state-by-state variances in Medicaid, among other pressing issues. Could MANOVA make health care seem sexy while ultimately paving the way for a brighter future in patient care? I went to Minneapolis to find out.

During his 12-year stint at General Mills, Addicks got to know the leaders at a number of other companies, and he mined those connections to curate the content for the program. He also worked against an aggressive timeline, acknowledging that the concept of MANOVA was “just a bunch of notes scribbled on a piece of paper five months ago,” he said when he took the stage in Minneapolis to welcome attendees.

“Everyone was interested in the idea of MANVOA, but we were having these very corporate conversations about waiting to do it until 2020,” Addicks said. “And I knew what would happen. We would still be waiting, and no matter when we started, we would still make freshman mistakes. So we decided to just jump in and do it, [thinking that] if it doesn’t work, we won’t do it again.”

Addicks found a cast of government officials, business owners, and media leaders who also were ready to take a leap. The program was designed to more broadly define health care, bringing together companies not typically associated with a medical conference: Facebook, Verizon, and CNBC, to name a few. Sam Kass, the White House senior policy adviser for nutrition in the Obama administration, discussed the role that food and food shortages due to climate change play in health care. Bill Frist, heart surgeon, businessman, and former U.S. senator from Tennessee, shared stories of how BehaVR — a company he helped launch — is working to make virtual reality goggles available to help patients who are struggling with opioid addiction. Amir Dan Rubin, president and CEO of One Medical Group, offered a look at why Fast Company called his company — which operates stylish medical offices in metro locations convenient for office workers to drop in during their lunch breaks — one of the most innovative companies in 2017. David Stillman, an expert on generations in the workforce, shares how Gen Z will reshape health care during the MANOVA Global Health Summit. (Handout)

The roster of more than 100 speakers also drew heavily from the local community. Not only is the region surrounding the Twin Cities known as Medical Alley and home to more than 1,000 health-care companies, MANOVA’s name is a mashup of Medical Alley and innovation. But the summit also shared what’s happening in medicine from a global perspective, featuring conversations on what the U.S. can learn from the rest of the world when it comes to patient care. One panel included an advisory board member from Sight, a well-funded Israeli blood diagnostic startup, and a doctor from the United Kingdom working on an experiment in which local Greater Manchester officials will take control of an $8-billion budget for health- and social-care that has traditionally been managed by national authorities. Pre-session programming screened footage from the PBS documentary series “Sick Around the World,” which spotlighted such unexpected approaches to patient care as making a prosthetic leg out of a drainage pipe.

It was important for MANOVA to include those kinds of examples from “other places in the world where people are innovating because of affordability,” Addicks said. “They don’t have accessibility to a 3D printer or expensive robotic equipment. Maybe their approach can help inspire U.S. health-care innovators to do things differently and to stop focusing on costs.”

Opening the Doors to Everyone

More than 1,000 attendees registered for full passes to MANOVA, but the conference also welcomed more than 200 attendees from the local community for a free one-hour session, “Entrepreneurs Tackle Mental Health and Wellbeing,” on the second evening. Presented in partnership with Minnesota Public Radio (MPR), the panel featured three high-tech entrepreneurs who are reimagining how to provide mental-health support, and was broadcast live on MPR. While the evening event may have represented a small segment of MANOVA’s overall program, it’s a direction Addicks wants to pursue more fully with future editions.

“If you’re a member of the general public,” Addicks said, “we want you to come.” There is a new generation of patients who take a far more active approach to their care compared to Baby Boomers, he said, who do exactly what the doctor orders. “Generation Z,” he said, “wants to be in charge of their health, and we want them to be part of the conversation here.”

For those patients, Addicks is considering offering day passes for upcoming summits. “They may not want to come to everything,” he said, “but so much of what we’re discussing here directly relates to their everyday lives.” As the program came to a close Oct.10, Addicks reflected on what worked and what he wants to improve upon. “I think people understood the general idea, and I think they recognize what we’re trying to do here,” Addicks said. “Most importantly, there are people who want to advance MANOVA and be even more innovative.” Case in point: Shortly before the conference, he said, “someone stepped forward and asked about hosting a fashion show with designer hospital gowns and scrubs.”

While the designer runway didn’t happen at the launch, it could come to life, along with other new features, at MANOVA 2019, scheduled for Oct. 14–16. Addicks said that he wants to explore opportunities to make the experience more interactive, to add live music, and take cues from SXSW, whose programming brings attendees outside the convention center and into the Austin community.

In these ways, MANOVA will continue to break out of the traditional medical-meeting mold. The first edition put a stake in the ground: Even in the midst of major uncertainties about health-care legislation, its message was one of optimism.

“This is about to be a massively profound moment in medicine,” MANOVA session speaker James Mault, MD, FACS, said. Mault, who serves as president and chief medical officer of genomics and personalized medicine company CQuentia, added: “We will look back at this next decade as one of the most profound moments in the history of health care.” When he made “innovation” part of MANOVA’s name, Mark Addicks wanted to deliver on the premise that the next big ideas in health care represent serious business opportunities. According to data from PricewaterhouseCoopers and CB Insights, venture-capital firms committed $10.6 billion to health-care start-ups in the first half of 2018. As that interest continues to grow, MANOVA wants to be the place to connect medical visionaries with the capital they need to support their work.

Addicks said that representatives from at least 40 entrepreneurial companies attended MANOVA in the hopes of finding funding, and the number of attendees looking to them as potential investment opportunities exceeded even his expectations.

“I’m a little surprised by how many people showed up from the banking and venture-capital world,” Addicks said. “These companies have hundreds of millions of dollars to spend, and they want to hear about the next wave of new ideas.”