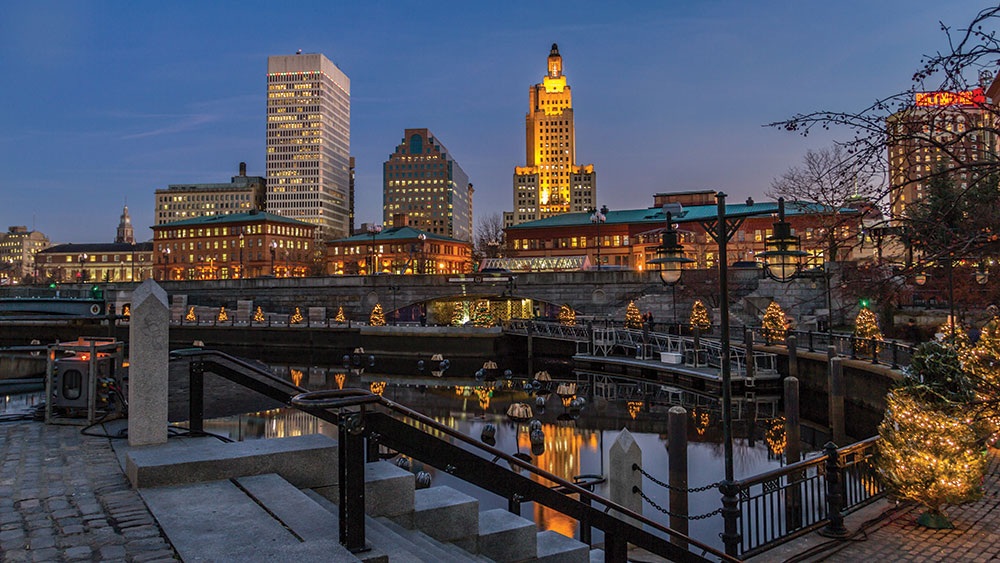 The skyline of Providence, Rhode Island, shines on a winter evening. (Nicholas Millard)

In the 1920s, Providence, Rhode Island, was booming. New buildings were springing up across downtown, including the 18-story Biltmore Hotel. For its grand opening in 1922, the Biltmore served 10 courses to 1,200 guests and covered the brick façade in hundreds of roses, carnations, and twinkly lights. John F. Kennedy and Audrey Hepburn would eventually stay there.

As Providence fell on tough times in the 1960s — along with many other New England cities — the Biltmore’s fortunes waned, too. The hotel closed in the 1970s, becoming part of the aging brick urbanscape that motorists saw as they whizzed by on Interstate 95. Since then, however, the city has undergone a sweeping renaissance — and so has the Biltmore, an emblem of the riches, architectural and otherwise, to be found in downtown Providence.

The Dorrance to the Dunk

As I checked into the Biltmore one early November night for a press trip sponsored by the Providence Warwick Convention & Visitors Bureau (PWCVB), I was startled by the hotel lobby’s grandeur, from an undulating central stair-case to ornately carved ceilings. On the 12th ﬂoor, my room gracefully melded those historic details with cool tones and modern touches. I dropped my bags and headed out to meet my hosts at The Dorrance, a few blocks away. The Dorrance in Providence, Rhode Island, is a speakeasy-style restaurant in a former Federal Reserve Bank.

Like the Biltmore, The Dorrance swirls with early-20th-century atmosphere. A speakeasy-style restaurant in a former Federal Reserve Bank, the soaring space has stained-glass windows, marble ﬂoors, another elaborately carved ceiling, and a dramatically long central bar. Craft cocktails in hand — my smoky “Mexteca” blended mezcal with vanilla and jalapeño — we toured the balcony overlooking the main ﬂoor, which doubles as an event space.

A few blocks away, at Garde, we settled into a more modern dining room for dinner: a gorgeous charcuterie plate followed by plates of fresh seafood and pasta. My roasted sea bass, on a bed of corn, ﬁgs, and couscous-like pasta called fregola sarda, was buttery and sumptuous.

Garde’s executive chef, Robert Sisca, is a graduate of Providence’s Johnson & Wales University, a hospitality-centric school that regularly injects culinary talent into the local dining scene. Hence, eating in Providence is a constant adventure. Over dinner, Kristen Adamo, PWCVB’s vice president of marketing and communications, explained how Providence was one of the ﬁrst U.S. destinations to begin using culinary resources to attract travelers.

The next morning, after a brisk 10-minute walk, we found more stunning architecture inside Veterans Memorial Auditorium. The VETS has the largest theater stage in New England, as well as mural-covered ceilings and 1,931 red-velvet-covered seats. But it hasn’t always been smooth sailing. Construction on the VETS began in 1928 but ground to a halt during the Great Depression, and its shell sat unﬁnished until 1950. More recently, the building has been renovated from head to toe — while preserving its historic feel — adding an airy, glass-walled prefunction space.

Next door, the Renaissance Providence Downtown Hotel—which also languished for decades — serves up more modernized 1920s grandeur in its lobby. The property offers 272 rooms and suites with 47 different layouts, as well as nine meeting rooms and a cellar dining spot, Public Kitchen & Bar, with a dim, sexy vibe.

Three rivers run through Providence, and we soon took to one of them, the Woonasquatucket, aboard a Providence River Boat Co. vessel captained by Tom McGinn. As we drifted beneath Providence’s arched bridges, McGinn explained how these once paved-over rivers were uncovered during Providence’s 1970s rebirth — and how the hurricanes of 1938 and 1954 devastated downtown, resulting in the construction of a barrier system that now repels ﬂooding.

Soon enough, we were eating again — this time on Federal Hill, Providence’s historic Italian neighborhood. Inside Trattoria Zooma, we shared crisp Neapolitan-style pizza and hulking plates of pasta as general manager Armando Bisceglia told us how he sources tomatoes and wine from near Mount Vesuvius in Italy. He also shared that he can turn the restaurant into a tasting tour of Italy’s regions for groups of 150-plus, something he calls “The Armando Experience.” 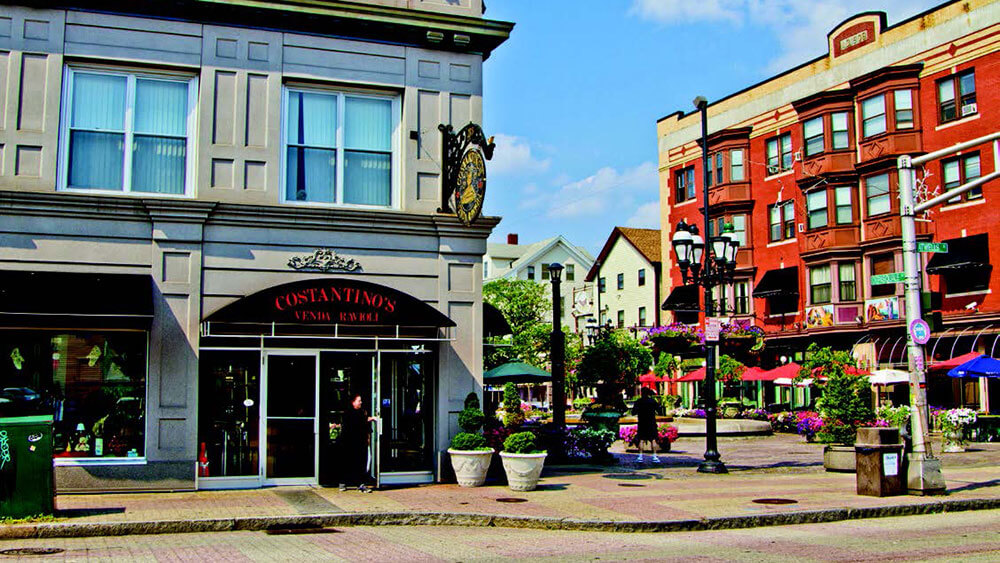 Federal Hill, Providence’s historic Italian neighborhood, is filled with restaurants and other points of interest.

Even though we were stuffed to the gills, more bites awaited during a Federal Hill walking tour with guide Cindy Salvato of Savoring Rhode Island. A trained pastry chef and J&W instructor, Salvato steered us through a live-chicken market, a wine shop, two Italian delis, and an espresso-and-pizza joint while offering tips on buying the best olive oil and balsamic vinegar.

After a much-needed digestion break, we reconvened inside a private cellar room in Gracie’s, an elegant New American spot where executive chef Matthew Varga wields eclectic ingredients for dishes such as wood-grilled octopus with fennel, almond dukkah, and romesco sauce. After dinner, we took over a private box (with its own kitchen) at the Dunkin’ Donuts Center, a 12,000-seat downtown arena, to watch the American Hockey League’s Providence Bruins take on the Lehigh Valley Phantoms. The Bruins lost, but on the way out, John Ciolﬁ, the Dunk’s assistant marketing manager, offered us a glimpse of the meeting room where basketball’s Big East Conference was formed in 1979. A plaque on the conference table marks the occasion.

The next morning, we walked around the corner to meet up in the busy atrium of the 564-room Omni Providence Hotel, which connects via skybridge to the Providence Place Mall and the Rhode Island Convention Center (RICC). The RICC’s 100,000 square feet of space includes a 20,000-square-foot ballroom and 23 meeting rooms, as well as 30,000 feet of prefunction space over-looking downtown — which soon will be transformed with the construction of four new hotels.

The RICC’s top ﬂoor was hosting a beer conference, and PWCVB Vice President of Sales and Services Thomas Riel explained that Providence often attracts meetings that align with local strengths — sports and food, surely, but also wind energy and nursing. “We can connect organizations to local leaders in those industries,” Riel said.

Then the unthinkable happened, at least for a press trip: We had the afternoon off to explore on our own. I walked to College Hill, a rolling neighborhood that’s home to both the Rhode Island School of Design (RISD) and Brown University. After wandering past colonial-era saltboxes and steepled churches, I checked out the RISD Museum, a ﬁve-ﬂoor trove of ancient and modern masterpieces.

As night fell, the Providence River caught on ﬁre — purposely. Providence’s signature outdoor event, Water-Fire, began at dusk. The empty braziers that we’d seen in the river earlier were now ﬁlled with ﬂickering pine ﬁres. After a tasting menu at Mill’s Tavern, where chef Edward Bolus (another J&W alum) brines, cures, braises, and sears his way into diners’ good graces, we piled into another boat for a tour.

WaterFire happens several times a year, and draws thousands of people to downtown’s restaurants and galleries. Even though the streets teem with people and vendors, the event has a sort of reverent hush, with onlookers huddled along the banks, gazing at the ﬁres as they burn down into the night.

Back at the Biltmore, an Armenian wedding was raging in the hotel’s top-ﬂoor event space. But with walls as thick as they made ’em in 1922, a few ﬂoors down, all was quiet.