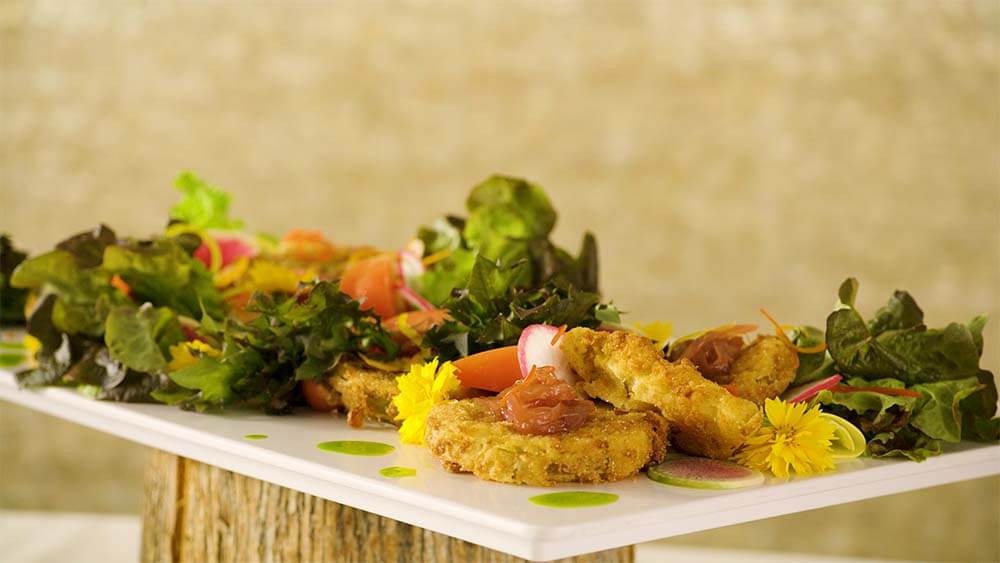 A fried green tomato salad from the Raleigh Convention Center’s new menu shows the diversity of North Carolina’s crops — the state is the country’s third-most diverse in terms of agricultural commodities.

When attendees sit down to a meal at the Raleigh Convention and Performing Arts Complex, the food they’re enjoying truly has a local flavor. The items aren’t on the menu just because they represent regional fare — most of the ingredients were grown or made in the state of North Carolina.

Whether it’s a light lunch of sungold tomato and eggplant chow chow, made with barrel-aged apple cider and served alongside crispy cornbread crostini, or grazing at the morning Biscuit Bar — which features cheddar-scallion, sweet potato, and buttermilk biscuits served with pimento cheese, black-eyed pea hummus, whipped honey butter, jams, and jellies — attendees are sampling foods that support the local community.

These options and more are part of Sodexo Live!’s new menu, “A Seat At The Table: Southern Cuisine Featuring North Carolina’s Women and BIPOC Farmers and Food Producers,” introduced earlier this year. And although the menu is regional in a fun and quirky way — fancy a southern-fried chicken and Krispy Kreme “waffle,” anyone? — there is a deeper, more thoughtful intent behind it to showcase who grew and made that food. Executive chef Phil Evans intentionally designed the menu around local ingredients grown or made by women and/or Black, Indigenous and People of Color (BIPOC) farmers and purveyors — like Stanley Hughes of Pine Knot Farms near Hillsborough, a third-generation, African American farmer whose beans go into the Brunswick Stew. And Peggy Rose’s famous Pepper Jelly, which tops Sodexo’s chicken and waffle combo. Several of the dishes featured in the Raleigh Convention Center’s new menu include vegetables grown by Donald Hines of Hines Family Farm, a fourth-generation farmer in Jacksonville, North Carolina.

According to Kerry Painter, director and general manager at Raleigh Convention and Performing Arts Complex, the program all started with a discussion around diversity. She said they asked themselves: “‘Where can we look more like our clients beyond hiring and the typical conversations?’ As our food team started to explore it, what really … bubbled to the top was the idea [that] the source of the food is something that we typically overlook.”

The goal, she said, became to not only financially bolster these small-scale local growers and makers, who might often get bypassed by larger suppliers, but to go a step further and intentionally highlight them in a way that encourages more widespread awareness of historically underrepresented groups in agriculture.

“This is the true, authentic sense of place,” Painter said. “These are people who have for generations lived here or farmed here.”

However, they are not always equitably represented — nonwhite farmers only make up 5 percent of total farmers nationally, and only 1.4 percent of farms are owned by African Americans. A hundred years ago, it was 14 percent, according to a recent report in The New York Times. The Carolina Cast Iron Rice with Okra and Peppers dish — on the Raleigh Convention Center’s new “A Seat at The Table” menu — includes vegetables grown at New Ground Farm in Pembroke, North Carolina.

Blevins emphasizes this “because [those who are] already in the supply chain are going to be in the supply chain, regardless of what happens to these small farmers. These BIPOC growers and processors of food and sauces” and other products, he said, “we have to be a little more intentional about getting them involved, because there are so many barriers to entry for agriculture in general and the bigger food system as a whole.”

Supporting the legacy and survival of BIPOC and underrepresented growers and producers isn’t just important for a sustainable agriculture ecosystem in the U.S., it’s essential to a healthy global food system — a point made clear by the UN Food Systems Summit held this past September.

“Across the more than 900 so-called independent dialogues and 600-member state dialogues that the summit inspired, a common theme emerged: Healthy food systems are inextricably linked to healthy environments. This was the message from Indigenous peoples, climate-vulnerable countries, and island states such as Fiji and Barbados,” wrote Agnes Kalibata, Ph.D., UN Secretary-General’s Special Envoy to the 2021 Food Systems Summit, in an opinion piece for The National News in October. “Food systems must continue to play a defining role in [the] COP26 climate talks, which is unlikely to achieve its aims without more sustainable, inclusive, and resilient food systems.” 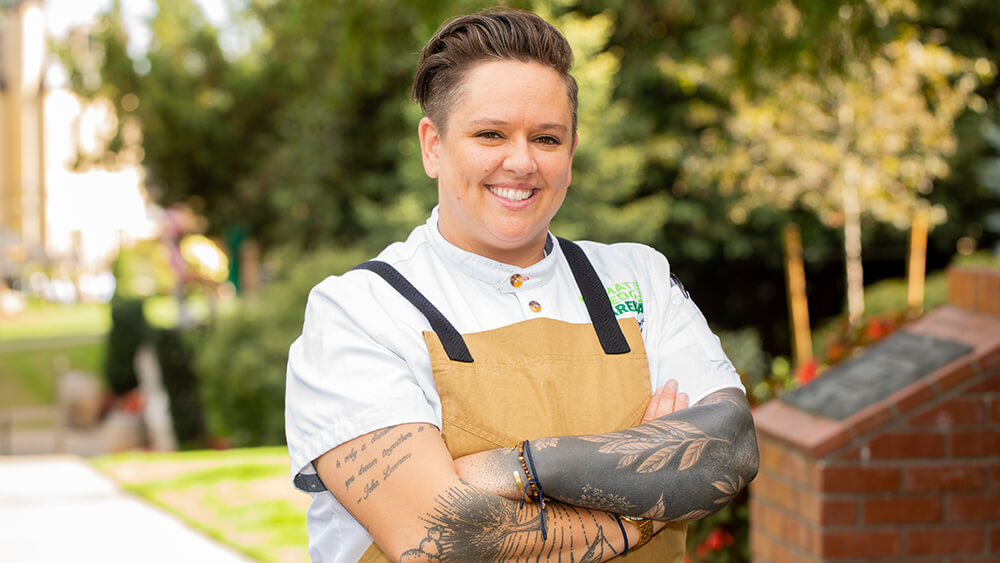 In Seattle, the brand-new Climate Pledge Arena bills itself as the world’s first net zero arena — meaning the facility aims to offset all of its carbon emissions and is seeking to become the first venue certified by International Living Future Institute. Part of the Seattle Center and home to the Seattle Kraken NHL team, the $1.2-billion facility has set out to be a state-of-the-art model of sustainability, from eliminating single-use plastics entirely to hitting at least a 97-percent diversion rate.

And as for its food and beverage program, partner Delaware North has brought in chef Molly DeMers, the first female and openly LGBTQ executive chef to open a major professional sports arena. A veteran of convention centers, DeMers was formerly executive chef at the Colorado Convention Center and most recently the Seattle Aquarium.

The Climate Collective — the arena’s food and beverage program — has also set the goal of acquiring 75 percent of its ingredients from within 300 miles of the arena. In addition, house wines and craft beer have also been sourced from Washington and Oregon. The intention, similar to that of the Raleigh Convention Center, is to reinforce an unmistakable sense of place — in this case, to ensure guests are having an authentic Pacific Northwest experience. Even the arena’s retail concepts are local — Just Poke, Lil Woody’s Burgers & Shakes, and Ballard Pizza Company are all Seattle-born.

For further information on the environmental and social reasons for buying locally sourced food, read “Ten Reasons to Buy Local Food” from the University of Vermont.