Pamela Meredith Hamilton, of The Hamilton Exchange, shares her message for Dear World at EduCon, saying, “You’re only broken when you perceive yourself to be broken.” (Chris Cruz/Dear World)

Pamela Meredith Hamilton knows the power that stories have to bring people together, so she didn’t need convincing to participate in the Dear World storytelling initiative at PCMA’s Education Conference, held in June in Los Angeles. Dear World is a social enterprise that helps communities, companies, and teams understand each other and work better together by encouraging them to share their personal stories. Dear World got its start in 2009, when founder Robert X. Fogarty began taking photos of New Orleans residents and their “love notes” to their city as a fundraiser for another nonprofit. Initially called Dear New Orleans, the venture grew into the organization it is today.

Part of the Dear World storytelling process involves participants posing for a photo portrait with a message, either about a person they cherish or their own story, written somewhere on their bodies. Since its inception, Dear World has taken more than 150,000 photographs, collecting the stories of people all around the world, from survivors and first responders of the Boston Marathon bombing and the Pulse Nightclub shooting in Orlando, Florida, to citizens of South Sudan, Syrian refugees in Jordan, and former child slaves in Jaipur, India.

Dear World also has found a following among business event professionals, including participants at EduCon, who had their own stories to tell. Dear World storyteller Keshia Hannam invited attendees at EduCon’s opening session to participate in the Dear World activation, sponsored by Hilton, taking place at the conference’s “Accelerate Stage” at the JW Marriott L.A. LIVE. Hannam also presented a session to help attendees find their own meaningful story. At the closing session, she shared some of the 250 photos taken of participants with their messages written on their bodies. Even without knowing the stories behind those messages, the slideshow presentation was a moving experience for the audience. Some messages seemed straightforward and others — like Hamilton’s “My brokenness is beautiful” — naturally piqued curiosity.

When Hamilton was seven years old, her mother left her at a cousin’s home and didn’t return for several months, she told Convene. For the next nine years, she bounced between her parents, both addicted to drugs, and her cousin and his girlfriend. At 16, she moved in with her cousin permanently, eventually graduating from college and earning a master’s degree.

“I love the fact that the basis of Dear World is sharing your story. By sharing our stories, we promote not only internal healing, but the healing of others,” Hamilton said, adding that hearing those stories “reminds us at the very core that the person sitting next to us is a human being.”

A registration and sponsorship fulfillment manager for the National Investment Center for Seniors Housing & Care (NIC), Hamilton also has a personal passion project. She founded The Hamilton Exchange, which focuses on facilitated group discussions about marriage and family. She uses the concept of storytelling in both roles and she thinks it has an important place in the events industry, which, she said “is about delivering experiences, right? That’s where we come together. What better way to connect with one another than sharing those experiences?” Hamilton’s message for Dear World at EduCon, she said, was meant to let people know that “everything you go through in this life that is meant to tear you down, you can use to fuel you and to make life beautiful. You’re only broken when you perceive yourself to be broken.”

Hamilton’s story doesn’t end with overcoming her troubled childhood. It came full circle in two ways about six years ago. Before her mother died in 2013, Hamilton reconnected with her. “Instead of being angry and bitter about my mother, I took advantage of the time we had together,” Hamilton said. “When she passed, I didn’t feel regret, and that, to me, was a huge accomplishment.”

That same year, Hamilton and her husband, parents of five children, began caring for an extended family member’s two-week-old daughter who was suffering from withdrawal due to her mother’s drug addiction. She’s six years old now, said Hamilton, who was granted legal custody of the child in 2014, and she still struggles with the side effects of her mother’s addiction. “We are focused,” Hamilton said, “on making sure that she has all the love, support, and resources that she needs.”

Dear World photographer Chris Cruz took dozens of portraits at EduCon, a sampling of which you will find in the gallery below. 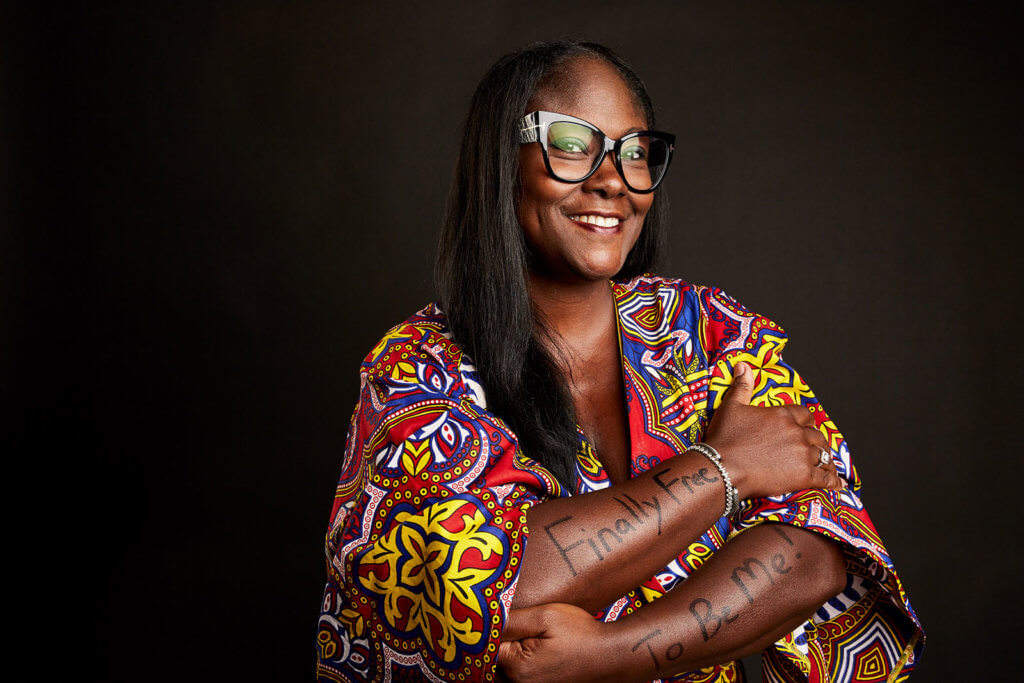