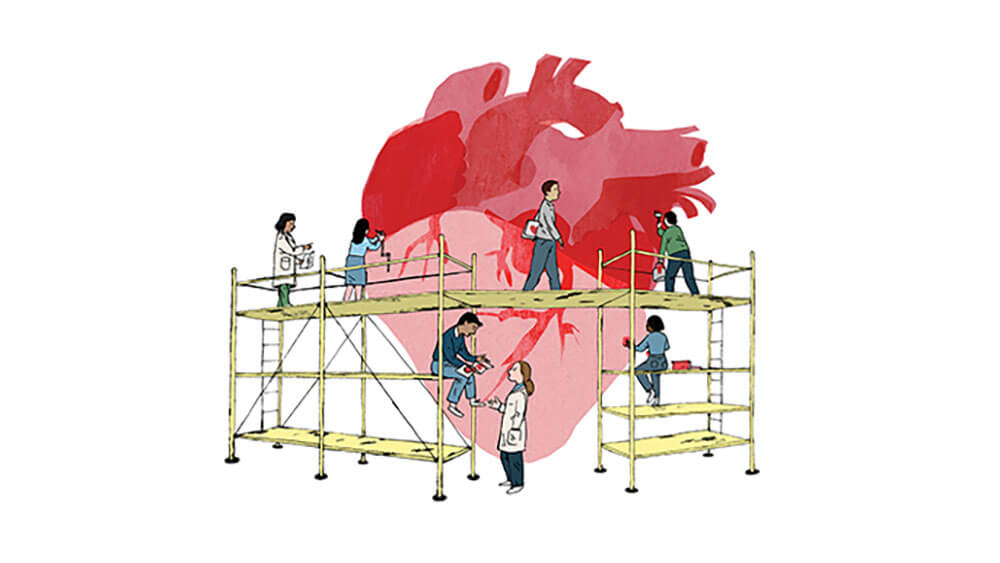 The daylong Biofabricate 2016 brought together professionals in the ﬁelds of design, technology, and biology. (Illustration/Carmen Segovia)

Some people live and breathe design, but none more literally than students and practitioners of biofabrication, which uses biological organisms to make clothing, utensils, electronic equipment, and other consumer products. How? “Organisms such as yeast, bacteria, fungi, algae, and mammalian cells are fermented, cultured, and engineered to synthesize nature’s materials,” according to the website for the Biofabricate 2016 conference, “but with new functional and aesthetic properties.”

Biofabricate was founded in 2014 by fashion designer Suzanne Lee, chief creative officer of Modern Meadow, which works to culture leather materials. “What excites me about using microbes is their efficiency,” Lee said during a presentation at TED 2011. “So we only grow what we need. There’s no waste.”

Half-hour breaks were scheduled throughout the day, and took place in Biofabricate’s Design Lab, which the conference program described as an “exhibit [that] showcases the future before it arrives.” Nearly 20 companies participated, from Biorealize, whose Microbial Design Studio designs, cultures, and tests genetically modiﬁed organisms, to Maurizio Montalti, who creates textiles, bowls, and other works from biomaterials.

During his keynote presentation, Carnes unveiled Adidas’ Futurecraft Biofabric, the ﬁrst “performance shoe” made using Biosteel, a spider-silk ﬁber technology. “This is a pioneering stride forward,” Carnes said in a statement, “beyond sustainability into a new territory of bionic innovation.”